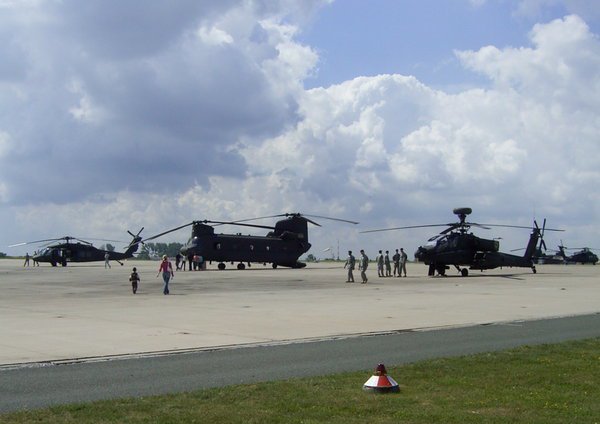 The US military is planning to triple its forces deployed in Ansbach [Germany] in 2017.  Apparently, the region should become the hub for units to be moved to Eastern Europe. The Left Party is afraid of Ansbach possibly becoming a hotspot of a Russian-American military confrontation.

Obviously, the US Army will significantly expand its presence in the region around Ansbach, the newspaper Nordbayern reports. “Rotation units” – which will be stationed for about nine months each, in the border region with Russia, shall be transported via Ansbach. Therefore, the number of soldiers in the 12th Aviator Combat Brigade is expected to triple from 2017 on.

“A request for 2,000 troops has already been filed, who are supposed to be deployed in the next year, but a decision has not yet been made,” Captain Jaymon Bell, spokesman of the 12th German Aviator Combat Brigade, is quoted by Nordbayern newspaper. Currently, around 1,000 US troops are stationed in Ansbach-Katterbach and the nearby Illesheim.

Local citizen initiative expects “a massive increase of exposure to aircraft noise and emissions”. Ansbach should not become a pawn of military interests. Regarding the Americans, the initiative also refers to the “traditional mentality of occupiers”.

Member of the Left Party of the German Bundestag, Harald Weinberg, fears that “Ansbach could become the central hub of a Russian-American military confrontation, which would be decided on European soil”.

Weren’t the people of Germany asking that Ansbach be closed down? This is the US and the German government’s response?

A nice example of the fake German democracy: Only obedience is rewarded… As citizens of an occupied country the population always is left with only one choice – to acctept the decisions of the puppeteer. May it have been stationing of Pershing rockets, Afghanistan, Ramstein base or whatever.

The Europeans should shoot now! At the Americans!

For now we can sleep in peace. Let me remind here a fragment of an ancient vision: “And [the king of the north] will go back (to) his land with great wealth [1945. This detail indicated that Hitler will attack also the Soviet Union and will fight to the bitter end. In the beginning there were no signs of such the ending of this war]; and his heart (will be) against the holy covenant [hostility towards Christians]; and will act [it means activity in the international arena]; and turned back to his own land [1991-1993. The collapse of the Soviet Union and the Warsaw Pact. Russian troops returned to their country]. At the appointed time [he] will return back.” (Daniel 11:28, 29) The return of Russia in this context also means the breakup of the European Union and NATO. Then many countries of the former Eastern block will return to Russia’s zone of influence. Russian troops will be stationed here again.

“And [the king of the north] will enter into the south [this can be Georgia], but it will not be as the former [2008 – Georgia] or as the latter [now Ukraine], for the dwellers of coastlands of Kittim [USA, in the beginning without Britain] will come against him, and he will be dejected, and will go back.” (Daniel 11:29b, 30a)

What will induce the “king of the north” to enter into the south? Jesus said: “For nation will rise against nation”, as in 2008, and then …

This will be a nuclear war. (Revelation 6:4) “A great sword” in this context means a nuclear sword. As Jesus foretold, it will be “the beginning of birth pains”. (Matthew 24:7, 8)

All the details of this vision are being fulfilled from the time of ancient Persia, in chronological order. It is true that this vision is variously interpreted. As one can see, it has a lot of details. Therefore the insightful person is able to detect any error or sophistry. (Daniel 12:10)

If this happens then they will never get rid of them…

Fuck you too….the local germans have gotten rich off the US so stuff it up your ass.

go fuck yourself…maybe the Soviets would have treated you better? Asshole Krauts.