On August 15, the Iranian state-linked Fars News Agency has relelased a fresh reported arguing that the US-led coalition has conducted a helicborne operation rescuing a top ISIS commander from eastern Syria.

Military helicopters of the US-led coalition carried out another heliborne operation in Southeastern Deir Ezzur, carrying a senior ISIL commander on board, an Arab media outlet reported on Tuesday.

The Arabic-language al-Ahd news website reported that the US army carried out a heliborne operation South of the town of al-Sayal, taking away a senior finance official of the ISIL terrorists group along with his wife. Al-Ahd further said that evacuation of ISIL’s top financial official from al-Sayal was carried out after the commanders’ coordination with the US-led coalition.

The US army has conducted a growing number of similar heliborne operations to help senior ISIL leaders in Eastern Syria this year.

Local sources reported in July that a group of ISIL terrorists were transferred by a van from the town of Ayyash in Eastern Deir Ezzur to a ISIL-held desert region in the Eastern direction of the town of al-Sukhnah in Eastern Homs, where three helicopters of the coalition were hovering over the region.

One of the helicopters landed but the other two continued to fly over the region.

The three helicopters flew towards North and entered Raqqa airspace, adding that there was no information about their exact destination.

The sources further said that the ISIL militants taken away by the American choppers could have been one of the spying groups used by Washington via Jeish Maqavir al-Thowrah militant group to materialize its objectives in the region.

More reports said in June that the US-led coalition aircraft carried out heliborne operation in regions controlled by ISIL terrorists in Northern Raqqa.

The heliborne operation to save the ISIL members was conducted in the Northern parts of Raqqa.

Meantime, other reports said that the predominately Kurdish Syrian Democratic Forces (SDF) forces who were stationed in Raqqa under the US supervision allow the ISIL terrorists to leave Raqqa city.

USA is evacuating their CIA agents for who those stupid sunnis are fighting. XD.

Evacuated all the way to a nice, comfortable upper-middle class home somewhere near Arlington, VA for the remainder of their lives paid for with US taxpayer dollars. New identity, big family, government paid schools, easy credit. A good life. The ‘American Dream’ after a brief stint head-chopping for the CIA. How come nobody is telling high school kids in the US about this promising career path?

But perhaps 80% of ISUS leadership has been killed or wounded ! So how does the chosen few survive a bomb strike on their HQ? (unless they are tardy and MIA) :DD

Rita Katz, an israeli-american, has founded an agency aiming at “intercepting” and “distributing” messages of the terrorists.

So, ISIS give them informations and she tells you what happened !! XD

She also provided the White House with informations about Al-Qaeda before 9/11 that even the FBI was not aware of. XD.

mmmm Never trust someone with a name like ‘Katz’.

Man. How can ISIS communicate ? CIA have created the Amaq agency and cooperate with her. CIA number 2 is named David Cohen.

And these stupid sunnis are dying for Al-Bghadadi, a man that they have never see in all their livbe and who is a CIA agent. XD. This Al-Bghadadi was in Mosul. Then, he magically disapear to Raqqah. Then, again, he managed to disapear again to go to Raqqah. XD.

Bghadadi is probably in Coventry England with the Syrian Observation for terrorist rights guy having tea with British officials.

XD. The SOHR owned by one man. XD.

The poorly educated and cult followers have always rallied to flags and banners without any real cognitive thought. They have been the ‘cannon fodder’ since man evolved to group in tribes etc.

If such an agency is currently operating within the US, as a non-state terrorist intelligence sourcing and broadcasting agency, surely that would contravene parts of the Bush era Patriot Act with regard to aiding and abetting a known and designated terrorist enemy?

Well they can’t hide they created and sustained ISIS…
(deal made in Cairo with Al-Baghadi and McCain on behalf of Obama during the rule of Morsi, recorded on pictures) until ISIS broke the deal by returning to Irak (Obama was hoping to be able to have many troops removed from Irak, Syria destroyed, and when ISIS or other groups would have taken Damas to have gone into war for the protection of the Jewish state, offering a large part of Syria to Israel as a shared US-Israeli protectorate. This was revealed in a recorded conversation between Kerry, a few European representatives and representatives of “moderate” terrorist groups, which leaked, I think last fall)

Yes. One of the goal was to release these stupid sunnis and kill Assad. Like that, Israel and USA can occupy syria lands by “going to war against terrorism”.

You still need proof? You must be a moron yank…

it’s common knowledge for me, however, other moronic Yankkkees needs more convincing, and I live in Canada btw

That’s why sunnism is a bad religion. Sunnism can’t protect his own believers. A religion in which you don’t think. You just apply like a robot what you are told.

there aren’t bad religions, there are bad people behaving like agitators and a lot of them are jews.

Actually – we’re laughing at the stupidity of the American People.

Nobody Move
Reply to  Serious

It’s not about sunni or shia, the ISIS members are not even muslim, they are animals born and raised by U.S politics and zionists influence.

They were evacuating ISIS embeds and transported ISIS mercs in both Helicopters that went towards Maadan to help with the assault on the Syrian Army there, to perform an airborne drop behind the forces there.

They have done this since the beginning even the Iraqi Govt have caught them doing this and undermining their ridding Iraq of ISIS , they have too many people embedded in these groups.

It appears that the ISUS air drop did not do well !
I think hungry tigers where waiting on their southern flank. :) 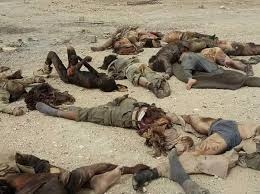 It’s very clear that there are US and UK nationals among ISIS “leaders”.
I’d bet money that the calyphate army has been advised and directed from the start by western agents, especially at high operational levels.

ISIS has militarly performed way above its weight to believe that it’s directed only by ex-iraqi intelligence or army officers. That people would probably make a good mid-level leadership, but there are two things that show a massive presence of Israelis and Anglosaxons in the highest “operation room”:

1- The strategic doctrine developed by ISIS cannot be developed by unprepared “generals”, no matter how much experience they got on the field. To use other words: there is West Point material involved.

2- The coordination at operational level shows a very advanced command and control network that is totally unexplainable if one has to believe what is publicly reported about ISIS organization.
I’d say that this particular goes to the point of westerners and israelis using US communication logistics and infrastructure to impart orders and directive to lower levels, and that at those lower levels there is people able to receive and process those directives for their ragheads subordinates. This is very likely the kind of person the above US heliborne operation has extricated from the field.

very well pointed out, remembers from how they created the Taliban…

US had how many Takfiri Wahhabist from Falluja & Sunni Triangle in Abu Garib,
Or rendition elsewhere + Gitmo.
These later are MK Ultra turned abd become agents to recruit Sunni in Iraq and Syria.
Work as guides with Foreign mercs unfamiliar with Iraq/Syria.
CIA and US special forces manage key game moves and counter attack vs Iraq and
SAA.
Abadi of Iraq knows US is running ISUS and using ISUS as pretext to remain in Iraq with military.
Russia not pressing for US to leave Syria or Iraq suggests the entire reality is now some jaded
Contest which will just go on and on.
MIC of nations along with weapons via criminal organizations continue to make profits
On the ISUS game.

This is your personal opinion and the editorial line of “zionist” propaganda, who needs to undermine Russian diplomatic efforts in Middle East.

The reason for this being that the US is losing influence, and the less influence the US has, the less Israel can keep its bullying stance over the other Middle Eastern countries.

USA snakes are so deceitful; They are actively moving out their terrorist to place them in another location; Russia /Syria and Iran could never ever do any agreements with these snakes!

please show some respect towards snakes.
They don’t deserve being used in such comparisons.

Nobody Move
Reply to  Cheryl Brandon

The US army has conducted a growing number of similar heliborne
operations to help senior ISIL leaders in Eastern Syria this year.

WOW …. must make ordinary Americans very proud of themselves and their cuntry. :-|

It wasn’t a typo.

U.S and zionists the biggest sponsors of terrorism.