During his visit, Stammer is in charge of strengthening cooperation with the allied countries and developing strategies in the region to face threats and improve security strategies.

The US Southern Command, of which Army South is a component, was established to conduct operations in Latin America. It is responsible for 31 states and 15 territories in Central and South America, and the Caribbean.

Colombian Defense Minister Guillermo Botero said that Stammer’s visit was pre-planned and that it is happening at the same time that US is pushing for a regime change in Venezuela is purely coincidental.

“It is a pure coincidence, it could have happened (the visit) a week before, or fifteen days later, it was scheduled for this date, there is nothing exceptional,” said the Minister.

A US Army EO-5C reconnaissance aircraft was spotted flying secret missions in Colombia, adding to suspicions that it might be spying on Venezuela.

Another intriguing US military aircraft spotting over #Colombia now — a @USArmy EO-5C, likely being used for communications intercepts from #Venezuela. https://t.co/OmZykiE32g

“The EO-5C spy plane is based on a Canadian DHC-7, a four-engine turboprop aircraft, suitable to carry some 50 passengers or a load of cargo. Aircraft of such type appear to usually lack any large military markings and overall look more like a regional airliner rather than a spy plane that one would expect to be packed with large and distinctive sensors.”

On January 31st, Reuters cited an anonymous senior Venezuelan official who claimed that the country will sell 15 tons of gold from central bank vaults to the United Arab Emirates in coming days in return for euros in cash.

According to the anonymous source, the sale of the gold reserves that back the bolivar currency began with a shipment on January 26 of 3 tons and follows the export last year of $900 million of mostly unrefined gold to Turkey.

Reuters also cited US-Proclaimed Interim President Juan Guaido, who said that he had sent communications to Russia and China to attempt to persuade them to back his side in the attempts to topple Venezuelan President Nicolas Maduro.

Also on January 31st, the European Parliament recognized Juan Guaido as Venezuelan president after a vote that passed with 439 in favor and 104 against, with 88 abstentions.

Following the decision, the EP also urged the EU to follow suit and recognize Guaido as the president, instead of calling for new elections.

“MEPs urged EU Foreign Policy Chief Federica Mogherini and member states to also recognise Guaidó “as the only legitimate interim president of the country until new free, transparent and credible presidential elections can be called in order to restore democracy.”

MEPs condemn the fierce repression and violence, resulting in killings and casualties and demand the de facto Venezuelan authorities to halt all human rights violations, to hold those responsible for them to account, and to ensure that all fundamental freedoms and human rights are fully respected,” the EP statement read.

They will open “training camps” for fascists of whole Latin America and mercenaries as usual..
Once bastard always bastard.

And what right those bitches from the European Parliament have to recognize Guaido as Venezuelan president ?!!?
That right is based on WHAT ?!?
https://proxy.duckduckgo.com/iu/?u=https%3A%2F%2Ftse2.mm.bing.net%2Fth%3Fid%3DOIP.sMaSoKI6Q8Q_CTcd_oKHAwHaFc%26pid%3D15.1&f=1

More bluff than punch. Let’s see how it rolls.

Psychological warfare is a standard part of the playbook. If you’re still rediscovering the playbook, what have you been doing in recent years. It seems the Western regime-change “media” are all over Caracas, so Maduro’s had all the time in the world to stock up on hostages and human shields–if he has an interest in playing hardball and, you know, protecting his country.

I am not sure that the US will risk a military intervention in Venezuela given that the opposition-controlled media is itself firmly opposed by a large majority of Venezuelans … the senior US military and sane heads at the Pentagon (if there are any left) know that without a large uprising by Venezuelans to support the US puppet “Gweedo”, the intervention will be a costly prolonged fail. My guess is that Russia & China will help the US find a face-saving exit from the Caracas hole that Bolton & Pompeo dug for Trump … who I am sure is already regretting having jumped into it.

After losing to the Taliban, the last thing Trump needs is another debacle in Venezuela that’ll end his diminishing chance of re-election. If he has any sense, he’ll dump Bolton and Pompeo.

“the intervention will be a costly prolonged fail.”

Sadly, costly and prolonged is their goal. They don’t care about failing or face-saving or regret. Bolton, Plumpeo, Trumpf and Company are following the playbook with the full support of their ‘base’.

As Iran recently noted, the Americans are not mad. Just stupid. Expect the worst.

Isis are busy changing their uniforms and shaving off their beards.They have a new role to play as democratic Venezuelan freedom fighters,while massacreing the local population. After all the OIL is worth the price to pay for the destruction of Venezuela and it’s people.

they dont need isis in Venezuela they already have another mercenary army in South America, that can be used and also another is been trained and prepared the last 30-50 years so connect the dots. united states, is a green house of terrorists from all countries readily available to the handlers unless you think what they build in US all the nationalities and half breeds from around the world and doing so in europe now is accidental and not a scenario of establishing their new world order.

Long before they start the problem in ME and around the rest hot spots on the globe think what they have done to south america the last 50 years then connect the dots. ISIS they will use it on european ground and Eurasia not in south america. Also check what happened to Philippines and who they used there.

These Washington’s morons want war with every single country in this world.

But they never win.

This is absolutely true.

In a poll conducted….before the Trump administration coup/regime change wet dream, 86% of Venezuelans said they were against any sort of US intervention, military or not.

And 81% of Venezuelans said they were against US sanctions. So much for “benign” foreign interference on behalf of “democracy” and “human rights”.

“5,000 troops to Colombia”, is a joke; these would have no chance against the arguably 15,000 Cubans who are in charge of security for the Maduro government;

Hmm, wonder what reply Russia and China gave Guaido to his request to back his overthrow of Maduro? My guess is the raised middle finger.

That’s normally what U.S. does to everybody including their “allays” and friends like ISIS or Kurds for example.

for years both Chavez and Maduro have fought an uphill battle to remove as many potential traitors and class enemies (in a Marxist sense of the word) from the Venezuelan military and replace them with “socially close” (a Bolshevik concept) elements from the poorer sections of society. Truth be told, this was a partially successful strategy as seen by the fact that during this latest coup attempt the Venezuelan military overwhelmingly supported the Venezuelan Constitution and the legitimacy of Maduro.

The good news here, according to my friend, is that the Venezuelan special forces (army special forces, jungle infantry troops, “Caribe” counter insurgency units, airborne units, etc) are in a much better shape and that they could form the core of a resistance force to the invasion

There is no such easy task in which U.S. can not FAIL AGAIN !
Venezuela count on your stupidity and usual cowardly acts Yankees!
We know that you never fail in FAILING AGAIN ! 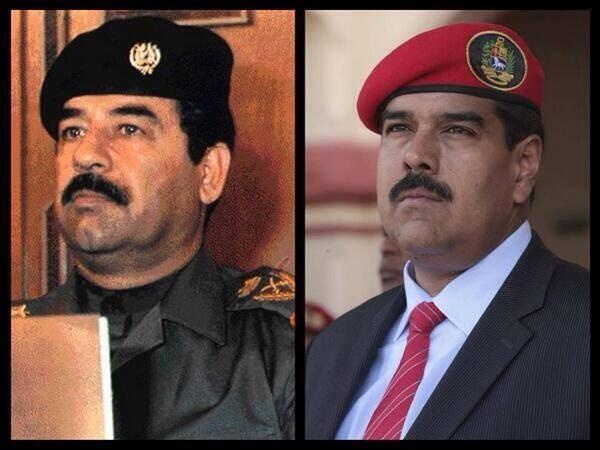 What do you want to say with this?

There’s no US Army.