All told, the Army’s investing $57 billion in modernization over five years — but it wants to take time to test new technologies before it commits to them.

WASHINGTON: Army modernization will really hit the gas in 2021, officials said today, ramping up rapidly from the 2020 budget request released this week. But the service has learned from past disasters to “try before you buy” and will give itself time to test how new technology works against real-world threats, said Undersecretary Ryan McCarthy, himself a veteran of the Army’s Future Combat Systems debacle. As each of 31 top-priority technologies matures — and not before — the service will move money into it and out of current programs, he said.

“’How fast is the pace and when are they going to get there?’” McCarthy told reporters in his Pentagon office this morning. But the Army can’t just buy everything it wants next year, especially since a lot of it isn’t invented yet.

“You’re developing a lot of those systems, so it takes time,” McCarthy said. “We’ve laid the dollars in over that five-year horizon” — the Future Years Defense Plan (FYDP) for 2020-2024 — “based on when they needed it.” 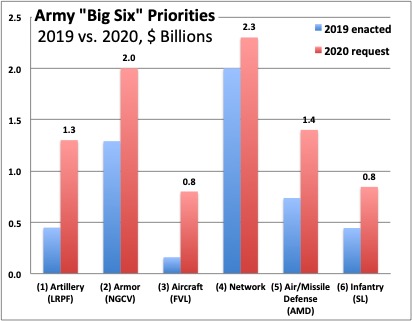 Show Me The Money

It’s not that 2020 budget is insubstantial. All told, as the Army’s chief balancer of budgets and capabilities, Lt. Gen. James Pasquarette, laid out at yesterday’s McAleese/Credit Suisse conference, the Army is requesting $8.6 billion in 2020 — a $3.6 billion increase over previous long-term plans — for its modernization priorities.

From 2020 through 2024, Pasquarette said, the priority programs will get $57 billion. That’s a whopping $33 billion increase — 74 percent — over prior plans, funded by cutting or cancelling 186 lesser priorities from helicopters to trucks to personnel. (The Army still wants to grow to 500,000 active duty troops, but it won’t get there by 2024 as originally planned).

Divide $57 billion by five years, and you get an average of $11.4 billion, well above what the Army’s requesting for 2020. That’s because ’20 is just the start and modernization funding will “steadily grow from ’20 to ’24,” Pasquarette said, as investment in older “legacy programs” steadily falls.

“The crossover point is about FY [fiscal year] ’21,” he said, “when the investments overall in RDA [Research, Development & Acquisition] accounts for our modernization priorities will be more than the like [i.e. comparable] legacy platforms.”

The Army’s 31 initiatives — not all of them full-fledged acquisition programs of record, yet — cluster in six broad categories. Each of the Big Six is getting a big increase from 2019 to 2020 and even bigger increases in subsequent years. In order of importance:

In addition, there’s another $5 billion over 2020-2024 the Army has set aside for modernization but not yet allocated to a specific priority or program. That allows them flexibility as new technologies and threats emerge or when programs do markedly better or worse than expected.

“If Long-Range Precision Fires needed more money, they’d get it, but that’s what they asked for,” McCarthy said. “The dollar volume associated with a priority is whatever dollars you need to meet that requirement.”

Basically, you fill the most important bucket first (LRPF), then fill No. 2 (NGCV), then down the line with what you have left — but the first bucket isn’t the biggest. Some of the priority areas are inherently more expensive than others, McCarthy said. LRPF is mostly missiles, ammunition, and upgrades to existing howitzers, while NGCV and FVL are building entire vehicles.

Equally important, not all the technologies are equally ready for prime time. Fed up with cumbersome government-led IT programs that get left in the dust by the private sector, the Army now wants to buy as much of its network as possible off-the-shelf, using commercial electronics and software. That’s ready now. The most urgent Next-Gen Combat Vehicle program, which is replacing the 1980s-vintage is looking at prototypes already built by industry (on spec), but only one candidate is actually in mass production. The longest of the Long-Range Precision Fires will come from hypersonic missiles and a giant cannon that shoots cruise missiles, both still experimental technologies. 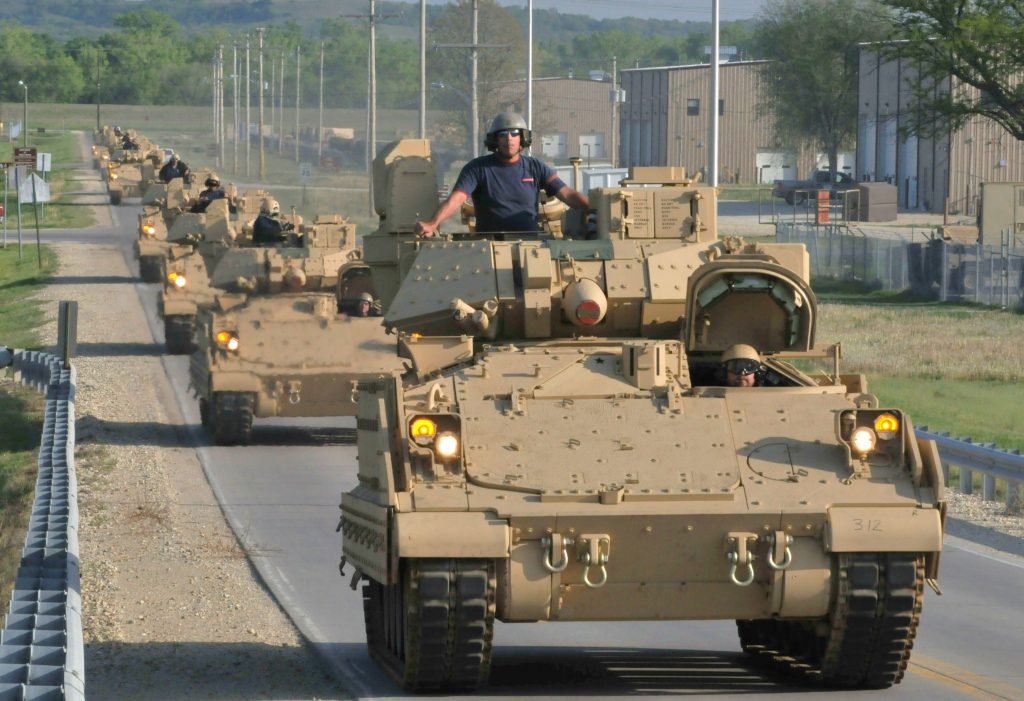 The Army’s already at work on its budget plan for 2021-2025, and its four top leaders — Secretary Mark Esper, Undersecretary McCarthy, Chief of Staff Milley, and Vice-Chief McConville — will personally keep an eye on the most important programs. That includes the 31 modernization initiatives “in particular,” McCarthy said, but not just them. “There’s also systems that are extremely important that are in the legacy portfolio,” he said, “and you’ll see a lot of those investments in this budget, [e.g.] Double-V-Hull Strykers and Abrams.”

In fact, the Army is actually increasing spending on the 8×8 Stryker, M1 Abrams tank, and even the M2 Bradley troop carrier in the near term — even as it races to replace the Bradley with a Next-Generation Combat Vehicle.

The M1’s getting another $1.7 billion for upgrades in 2020, a 64 percent increase over 2019. The NGCV program wants to replace it eventually, perhaps with a much smaller and more expendable robotic vehicle, but that project’s just in the brainstorming stage right now.

The Army will also keep buying Stryker armored vehicles throughout the 2020-24 plan: $550 million a year for a half-brigade of the latest DVH A1 models.

Even the Bradley’s getting $635 million in 2020, up 37 percent. But in 2023, once the Army’s finished buying five brigades of the newest Bradley model, it’ll start buying the next-gen vehicle instead. That’ll let the Army start retiring the oldest and most obsolescent Bradleys, the Operation Desert Storm variant.

Likewise, the Army will increase investment in its current mainstay helicopter, the UH-60 Black Hawk, by 37 percent in 2020, to $635 million, while it lets the Future Vertical Lift aircraft mature.

It’ll also buy a last few CH-47F Chinook heavy-lift helicopters in ’20. Neither of the two FVL variants now envisioned is actually big enough to replace the Chinook, but the service already has 10 percent more heavy-lifters than it needs, McCarthy said, and they’ve all been recently upgraded, so the buy stops there. (Production of the Special Operations variant, the MH-47G, will continue).

On the flipside, the Army is actually slowing down two of its newest programs because they were equipping support troops rather than frontline fighters. Those would be the tracked Armored Multi-Purpose Vehicle (AMPV), a turretless utility variant of the Bradley, and the wheeled Joint Light Tactical Vehicle (JLTV), a better-protected replacement for the Humvee.

It’s not clear if the Army plans to buy the same number of AMPVs eventually and just take longer doing it. But for JLTV, McCarthy said explicitly the Army would buy 1,900 fewer overall. That still leaves a fleet of 49,000 JLTVs by 2028, enough to carry almost 200,000 soldiers at once.

But in a future war with Russia, the Army doesn’t plan to tool around in trucks the way it did in Iraq. So it made sense to shift funding from JLTV to things like tanks.

That’s the kind of adaption that the cancelled Future Combat System failed to do as the world changed out from under it, McCarthy argued.

The do-or-die question for each of the Army’s new investments, McCarthy said, “is this capability going to work for you in a combat setting?” And that’s a very specific combat setting, driven by the threat of Russia in the near term and China further out.

“The Army has had challenges with major defense acquisition programs in the last 20 or so years, because we don’t lock in threat, operating concept, and ultimately materiel and have it all come together,” McCarthy said. “That’s where you see big weapons systems fail, is if the operators aren’t saying how we’re going to use it to prosecute a target in this type of fight.” To help prevent that, each of the Big Six priorities has a dedicated modernization team lead by a one- or two-star combat veteran.

By contrast, Defense Secretary Robert Gates killed the ill-fated Future Combat System in 2009 because he didn’t see how FCS’s light armored vehicles, which sacrificed armor protection for easier deployment by air, fit with how the Army would actually fight.

McCarthy was a young aide to Gates at the time. “The approach that he used,” McCarthy recalled, boiled down to Gates’ own Pythagorean Theorem, three questions whose answers had to fit together for the program to pass. “What’s the threat?” McCarthy recounted “How does this capability threat fit in the operating scheme? And is the technology too immature to be brought online now?”

McCarthy and other Army leaders applied the same theorem when they reviewed the entire Army budget in a series of “Night Court” reviews last year, he said. Informed by extensive wargames of how current and proposed weapons would work in a major war, he said, “we kept consistently asking those kinds of questions.”

Now McCarthy and his colleagues will face some harsh questioning themselves.

“It’s going to take a lot of heart to go up there and explain it… to Congress and others,” McCarthy said. “This will affect production lines” — and jobs– “but we have to make some adjustments.”

The first victim of war is truth, they say. But the next victims of war are all the neat, pretty little plans you have made before about how to conduct it. Do these fools REALLY believe they will be able to move 200,000 US-soldiers into Russia or China unmolested? What utter nonsense these plans are! In a real shooting war with Russia and China, all – repeat: ALL! – US-Army equipment will be obsolete, because the won’t be able to even TOUCH russian or chinese soil with a single boot before being blasted into oblivion.