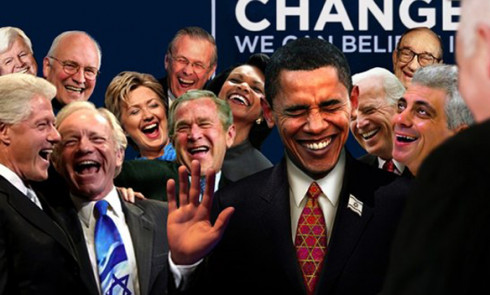 Every year the American historian William Blum publishes his “updated summary of the record of US foreign policy” which shows that, since 1945, the US has tried to overthrow more than 50 governments, many of them democratically elected; grossly interfered in elections in 30 countries; bombed the civilian populations of 30 countries; used chemical and biological weapons; and attempted to assassinate foreign leaders.

That extreme jihadism, which led to 9/11, was nurtured as a weapon of Anglo-American policy. In April the US state department noted that, following Nato’s campaign in 2011, “Libya has become a terrorist safe haven”.

The name of “western” enemy has changed over the years, from communism to Islamism, but generally it is any society independent of western power and occupying strategically useful or resource-rich territory, or merely offering an alternative to US domination. All are subjected to a western media campaign of vilification – Fidel Castro, Hugo Chávez, now Vladimir Putin.

The US elite do everything to protect their position in the world by loosening opponents. This fact has been revealed over the crisis in Ukraine. Russia has been growing very fast over the last 10 years. Its ties and influence with Europe increased. America “killed two birds with one stone”. On the one hand it separated Europe and Russia by putting it as aggressor, imposing joint sanctions and pursuing anti-Russian policy. On the other hand the US has sponsored a coup in Ukraine by growing fascist regime and organizing a punitive war in Donbass. It is a well-planned game.

Like the ruins of Iraq and Afghanistan, Ukraine has been turned into a CIA theme park – run personally by CIA director John Brennan in Kiev, with dozens of “special units” from the CIA and FBI setting up a “security structure” that oversees savage attacks on those who opposed the February coup.

It is geopolitics, nothing personal. Nothing personal if every day die civilians, children and women. But who cares if it happens not in the US or England. Who cares if Slavic people kill each other?

So this idea lives in Ukraine by now. The US sponsors a punitive war and let kill as many Ukrainians as possible. Who cares?