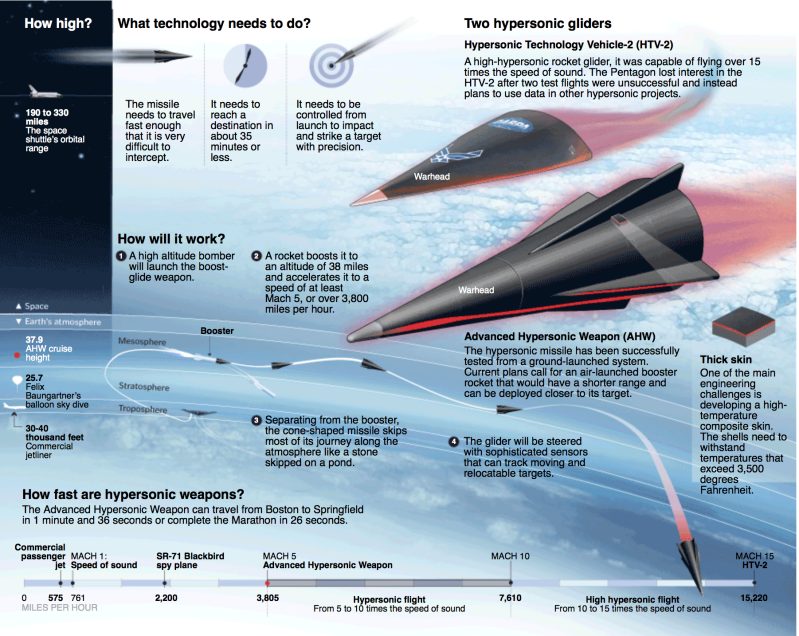 The US still appears to have no answer to hypersonic weapons

During the virtual Space Missile Defense symposium held by the US military last week, some of its plans to ‘level up’ its missile defences over the next two years were outlined. These include plans to commission the first “laser battalion,” to demonstrate that sailors can knock down ICBMs with missiles fired from surface ships, and to establish two ‘counter-Russian’ missile defence sites in Eastern Europe.

While the measures discussed were described as being part of a series of innovations in missile defence aimed at deterring Russia, China, Iran, or any other adversary, none of the measures appear capable of matching the rapid technological advances made in recent times by the Russians in particular.

Among the key developments outlined in the symposium is the ‘Maneuver Short-Range Air Defense’, or MSHORAD, basically a Stryker vehicle outfitted with anti-missile defences, including the laser-equipped DE-MSHORAD. “Expect to have the first battalion fielded in 2021 with four battalions by 2023,” Lt. Gen. Dan Karbler, commander of the U.S. Army Space and Missile Defense Command, told the audience.

Lt. Gen. L. Neil Thurgood, director for Hypersonics, Directed Energy, Space and Rapid Acquisition in the Office of the Assistant Secretary of the Army, said that the 50kw laser-mounted Stryker was due to be commissioned in 2022. The service is also working on a 200kw truck-mounted laser dubbed IFPC-HEL that Thurgood said would be deployable (although not necessarily deployed) with platoons in 2024.

By the following year, the Army wants to field an even more powerful laser, the 300kw Indirect Fire Protection Capability-High Energy Laser, or IFPC-HEL.

The Army also wants to equip mobile units with portable microwave weapons, which, Thurgood said, are more useful against drone swarms than lasers, as microwaves can destroy the electronics of more targets at once. But the systems required to support a directed microwave weapon, built at scale, are still too large to deploy on a truck. Scientists are working on reducing the size and weight of the components to make this more feasible.

The Pentagon’s Missile Defense Agency hopes that by the end of next year in Europe, a new Aegis Ashore missile interceptor site will have been completed in Poland (after delays due, in part, to COVID-19). “We are seeing an uptick in terms of the Army Corps construction,” said Adm. Jon Hill, director of the Missile Defense Agency. The project has a projected completion date of 2022.

Next year will also see the Navy test its ability to down ICBMs with SM-3 missiles fired from an Aegis destroyer and guided by off-ship radar via the Sea-Based Weapons System, or SBWS, Hill said.

After several delays work is also expected to continue on the new next-generation interceptor program, an effort to build new missiles capable of hitting more advanced ICBMs that deploy decoys or multiple warheads. MDA went back to the drawing board on the project last August, cancelling the program. It drafted a new request and re-awarded it to Northrop Grumman in May.

The MDA has “paused” its program to design an interceptor that could take out hypersonic missiles, Hill said, to look at near-term options. But the hypersonic threat is only building. That means that a new request could emerge next year, which could speak to the feasibility of different concepts for countering hypersonic missiles.

All of this activity reflects the growing importance the US is placing on deterring and defending against missile proliferation worldwide. Congress put missile defence under the jurisdiction of the defence undersecretary for research and engineering in 2018. However, MDA’s budget requests and appropriations have shrunk as other services have taken on more of the “missile defence” role for themselves.

While the US and its allies in Europe, the Middle East, and Asia are trying to develop new missiles and missile defence systems capable of responding to the new systems being developed by Russia, Iran and China, it appears that they have no answers as yet or in the immediate future. LINK

Any foreign policy “aimed at deterring Russia, China, Iran, or any other adversary” runs the risk of a third world war. But since the birth of the nuclear age mankind has not been able to fight world wars, something they knew in the Cold War, but present leaders have forgotten, asleep to the cries of history. https://www.ghostsofhistory.wordpress.com/

US are not up to the task to challenge China & Russia together. What would be the point to start something they can’t finish? And they grow weaker every day…

It´s …………… bullshit. If they didn´t have that stuff ready by now, 5 years after Russia entered Syria, they won´t have it magically appear anytime soon. My take.

Lasers are still at the early stage…more anti drone gadgets than serious weapons even though developing faster. US has no answer to hyper sonic weapons while Russia is about to introduce S-500 that are anti – hypersonic missiles and anti satellites weapons.

In practice they do not have an effective anti-missile system, otherwise they would have parried the Iranian salvo, hypersonic systems have been talking about it for decades and are still only in words, moreover they have no idea how to deal with the most dangerous threat – the Status- 6, so if they start a war against Russia they inevitably end up wiped off the face of the earth and they know it, the gossip serves to hide this elementary fact by now established.

The U.S can forget about Hypersonic weapons for 20 years, if there still a U.S that is

The Patriot tested successfully prior to deployment, and we all know how that turned out. Just ask the Saudis or Israelis who use it or clones.

Even if some of this new stuff does work to spec, it all costs money to develop and deploy. Rather than shutting down the scamdemic and opening up the economy to correct the current fiscal crisis. The fools in government are doubling down on the economic suicide. The US budget deficit is 4 trill this year, and that’s before round two of the scamdemic bailout that is currently under way. Which will add even more to the largest deficit in history:

“The White House and Congress approved roughly $3 trillion in emergency spending and tax cuts earlier this year in response to the pandemic, but many Republicans have signaled in recent weeks that they are not comfortable with more spending.

The White House and Senate Republicans didn’t act for several months after the House Democrats passed their bill. Then, a few weeks ago, the White House and some Senate Republicans finally made their counteroffer — a $1 trillion measure that would offer another round of stimulus checks, more money for small businesses, schools, and a lower level of enhanced unemployment aid, among other things.

Pelosi said last week that Democrats had offered to reduce their proposal by $1 trillion, but Treasury Secretary Steven Mnuchin said a $2 trillion package was still too large.”

“The US National debt surged to a record $26.5 trillion at the end of June, the highest level of any country in the history of the world. At that level, our national debt is equal to 132.5% of Gross Domestic Product, also the highest level ever recorded. The federal budget deficit for fiscal year 2020 is projected to top $3.7 trillion, according to the Congressional Budget Office, and it will be considerably higher if Congress passes another stimulus bill just ahead.”

The US is now past WW2 highs of debt to gdp ratios. And is in a much worse position to deal with it than after WW2 when the US had half of global gdp and the largest industrial base by far.