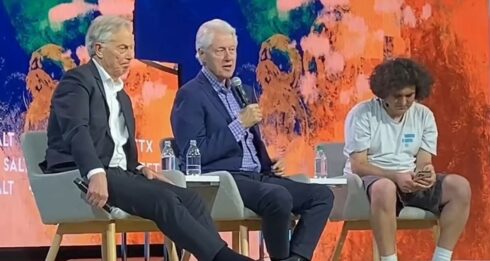 “Instead of using funds to fight Russia, the money was invested in the FTX Ponzi scheme.”

The sudden collapse of a crypto exchange linked to the Democratic Party in the US, has revealed that FTX presently suffers from $10-$50 billion in liabilities and virtually no assets. And among those liabilities, are “investments” made by Ukraine’s leadership clique.

The company FTX, in its bankruptcy filing appears to have held tens-of-billions in American “military aid” to Ukraine. Instead of using the alleged funds to fight Russia, the money was instead invested in the FTX Ponzi scheme.

From the bankruptcy filing it is clear that this money has now disappeared.

“Instead of using US military aid to fight Russia, Ukraine ‘invested’ part or all of it, into FTX, and right now, it looks like all the money’s gone,” said Hal Turner, a well-known American radio host.

The crypto money from unsuspecting clients was also used to fund the Democratic Party in the United States. More evidence has surfaced suggesting that the funds may have been stolen.

The CEO of FTX, Sam Bankman-Fried, was one of the top donors to the Democrats, with only George Soros outperforming his largesse. Recently, he also shared a podium with inveterate globalists Tony Blair and Bill Clinton.

According to Turner, it seems that Ukraine was receiving money from the US, and then sent it to FTX, and FTX sent it to the same Democrats, who had originally voted to send it to Ukraine.

“At this hour, it appears to some observers to be pure, criminal, money-laundering, and a criminal conspiracy to violate campaign finance laws,” said Turner.

Reuters exclusively reported that the founder and CEO FTX transferred $10 billion of customer funds from FTX to the trading company Alameda Research, which is run by his girlfriend Caroline Ellison.

Sam Bankman-Fried was born in 1992 on the campus of Stanford University into a family of academics. Born and raised to an upper-middle-class Jewish family in California, he is the son of Barbara Fried and Joseph Bankman, both professors at Stanford Law School. His aunt Linda P. Fried is the current dean of Columbia University Mailman School of Public Health. His brother, Gabe Bankman-Fried, is a former Wall Street trader and the director of the non-profit Guarding Against Pandemics.

He was the second-largest individual donor to Democratic causes in the 2021–2022 election cycle with total donations of $39,8 million, only behind Soros. Of this, $27 million was given to Protect our Future PAC, bankrolled by Bankman-Fried.

Look under the hood of any money laundering operation or financial crime of size and you’ll find Ukraine, it seems. https://t.co/N8mec9LOL6

Once again, Krusty and the Kiev Klown Kabal take it to the net and just dunk on the world!

Someone has dunked You hard. How many time a day is it?

Corrupt to the CORE. The only thing that will change this is a violent Civil War in America, it’s long overdue.

New institutions must be established!

Will never happen. White American swine are too fat, stupid, and drugged up to do anything.

Without something happen in fajoos owned America the things will go worst and worst for both, american citizens and world peace and prosperity. All the evil of the world was accumulated inside the kikejoo Empire of Lies shithole. Still peoples there are incredibly inert and hypnotized.

The 3 Stooges; Curly, Larry and Moe. The juice embeZZler, Tony Bliar, the war criminal psychopath from Pirate Rock and the one and only Billybob Klingon, $lumville war criminal-in-chief and serial rapist. With friends like these who needs enemies.

The latest bout of depravity from the “democratic” angloZionaZi empire of shit. Sam Fried Bankster, Demorat Ukropland bagman… nomen est omen as the Romans say and his two rented hustlers on their Bahamian Sunset Junket.

As for Fried Bankman’s Olive Oily “girlfriend”, never ever put a mouse gimp in charge of the chee$€.

Meanwhile in the real world, Z and more Z until the pigs are bacon.

Money actually never went to Ukraine, it was laundered among elites in the USA. https://medium.com/@officialcryptohub0/how-ukraine-lost-all-crypto-donations-on-ftx-ad9f9af09bc0

How can you trust your money to a Clown? By definition he is the opposition of seriousness. Of course he will gamble you tax dollars in the roulette and also buy cocaine with it. Duh.

Would you give any money to someone who shares a podium with an ex-PM and an ex-President?

Nein. These weren’t investments. FTX was a money laundering machine. FTX foundations like ftxfoundation.org replaced the Clinton Foundation. The Ukrainian government “invested” the kickback money into FTX. The money was then donated to the Democrat party and used Washington pet projects and friends. One of the pet projects was the TOGETHER trial that “proved” that Ivermectin is useless.

USA is the worst human farm

This is why USA Deep state started this war: to save their bankrupt economy and launder trillions stolen to these days. The entire US economy is a Bankman Scheme. They find an external solution to the internal, sistemic problem.

Biden: -What did you do with the 80 billions tax dollars we sent you/ Clown: -Hmm, aehm, well… I lost in cocaine, corruption and crypto. Biden: -no problem, we will send you 80 billions more.

🇺🇦⚡️Tension is rising, rallies in Odessa continue: people protest against power outages and against Zelenski.

The protesters have already blocked the road at the Korolev-Glushko intersection.

Good, the average Ukrainian Joe (who is not a nazi per se) is waking up against their Nazi leaders. Time for a coup from bottom to the top.

For once I am delighted by the actions of the Ukrainian leadership.

Hard times. Its just as corrupts as Rustica butno unexpected. They after all are kind of family and collapsed united in that.

do you speak English? or only Retardish?

May bee You are one of those mokies given a nice suit on from UNICEF thinking You are somethingf else too.

All digital crypto schemas are a fucking Bankman machine for the enormous mass of global apes. All are creation of Deep State cabal fajoos heavily linked with the intel services, to fund theirs COps and enslave the human population to banking system; firstly they will go with own citizens. Then the global agenda.

On his picture you have 3 liars: the one on the left: -Sadam has WMD, this is a fact! The man on the middle: -i did not have sex with that woman. the man on the right: – My crypto platform is safe.

Its needed to have another kind of currency, but this seemes to be the wrong way.

All a ponze scheme. The USA and west is nothing but

millions v. billions where did the REST of the money go? Organized crime is rampant in former east bloc countries and like bread mold is spreading westward throughout europe and the dark web is a thing. 40 million in donations to democrats=drop in the bucket Bankman has some ‘splainin’ to do…

If people don’t wake up to the criminal filth we are dealing with there is no hope,billions of US tax dollars given to the Kiev regime sent to the Crypto criminal then laundered and given in kickbacks to the Dems in America,AMERICANS FFS wake up from your zombified state.

Slick Willie’s there! There’s your answer.