The fact of carrying out airstrikes on a place of a terrorists’ gathering several miles away of Idlib has been confirmed by the Pentagon, which at the same time denies its involvement in the aerial raid on the Al-Jinah mosque, where US missile’s debris were found. 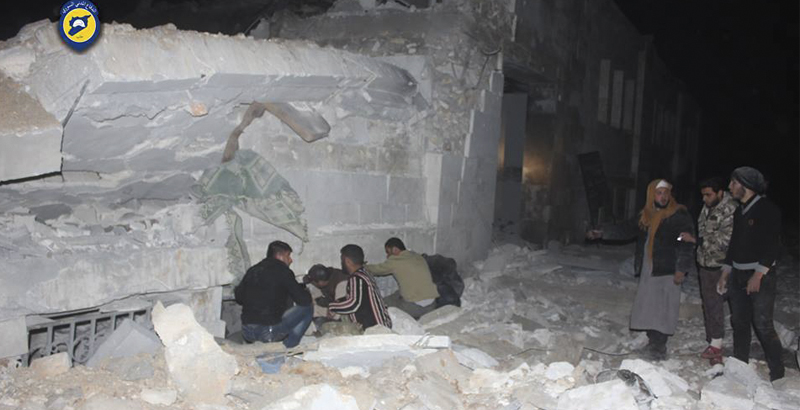 The Al-Jinah mosque after the airstrike (Photo: Facebook / White Helmets)

The Pentagon has admitted the fact of carrying out airstrikes on a place of a terrorists’ gathering several miles away of Idlib, at the same, time denying an aerial raid on the Al-Jinah mosque in the Syrian province of Aleppo, despite reports that US missile’s debris were found among the mosque’s rubble.

Not so many details of the airstrike, carried out on the mosque, are available. However, according to various reports, more than 50 people might have lost their lives in the attack. Later, photos and videos, showing the mosque’s wide-scale destruction, were published on social networks.

Video showing scale of devastation and huge crater just outside the Mosque of Al-Jinah in SW #Aleppo countryside. pic.twitter.com/TFUCAEXLuf

The Syrian Air Force, the Russian Aerospace Forces and the US-led air power operate in the area, however, none of them has taken responsibility for the airstrike so far.

At least 58 killed more than 100 wounded after an air raid on mosque during evening prayers in #Atarib near #Aleppo #Syria #WarCrimes pic.twitter.com/BnDUdoy9n7 — Selami Haktan (@slmhktn_eng) March 16, 2017

After activists of the so-called White Helmets rescue organization and the UK-based Syrian Observatory for Human Rights (SOHR) shared first images from the scene, some rushed to blame Damascus and Moscow for the attack.

Meanwhile, the US military department denies its involvement in the aerial raid on the Al-Jinah mosque.

“We did not target a mosque, but the building that we did target – which was where the meeting took place – is about 50 feet [15 meters] from a mosque that is still standing,” the AFP news agency quoted the words of spokesman for the US Central Command (CENTCOM), Colonel John Thomas.

As another representative of the CENTCOM, Maj. Josh Jacques, told the Airwars monitoring group, the target was “assessed to be a meeting place for al Qaeda, and we took the strike.”

“It happened to be across the street from where there is a mosque,” Jacques told the monitoring group, stressingg that the mosque was not the target and that it wasn’t hit directly.

CENTCOM statement: airstrike on Al-Qaeda was in Idlib.

But geolocation shows building was in Aleppo gov (though 4km from Idlib gov). Why? pic.twitter.com/e5jGreIzJ4

Journalist Samuel Oakford reported that the CENTCOM confirmed the fact of carrying out an airstrike in relative close proximity to the mosque. “US official says that they were targeting an ‘Al Qaeda meeting place’ that was across from the mosque in Aleppo. ‘We took the strike’,” Oakford wrote on his Twitter. Earlier, the reporter said that the CENTCOM told him that the US forces carried out an airstrike on a target, located just several miles away, in the bordering Idlib province, and was looking into the airstrike on the mosque in Aleppo suburb.

US official says that they were targeting an “Al Qaeda meeting place” that was across from the mosque in Aleppo. “We took the strike.” — Samuel Oakford (@samueloakford) March 16, 2017

“To be clear: this was a unilateral US strike, not part of anti-ISIS Coalition activities,” Oakford pointed out in another tweet.

Meanwhile, a photo of the missile’s debris was published online by Sakir Khader, who identifies himself as a journalist, focusing on Syria, Turkey, and the Middle East in total. According to Khader, the picture shows the debris, found in the rubble of the destroyed mosque.

Photo shows the remnants of a bomb used in the airstrike on the ‘Umar ibn Al-Khaṭṭāb mosque in the rebel-held village of al-Jinā, w-Aleppo. pic.twitter.com/aGsqMjcWIJ

Wouldn’t be surprised if they were meeting in a Mosque. That’s where they usually meet and store weapons and ammunition. They used to hide in Mosques when the rules of engagement prohibited soldiers from firing on Mosques.

If a mosque with Islamist terrorists in it was destroyed, then IT’S A GOOD JOB, no matter who did it!