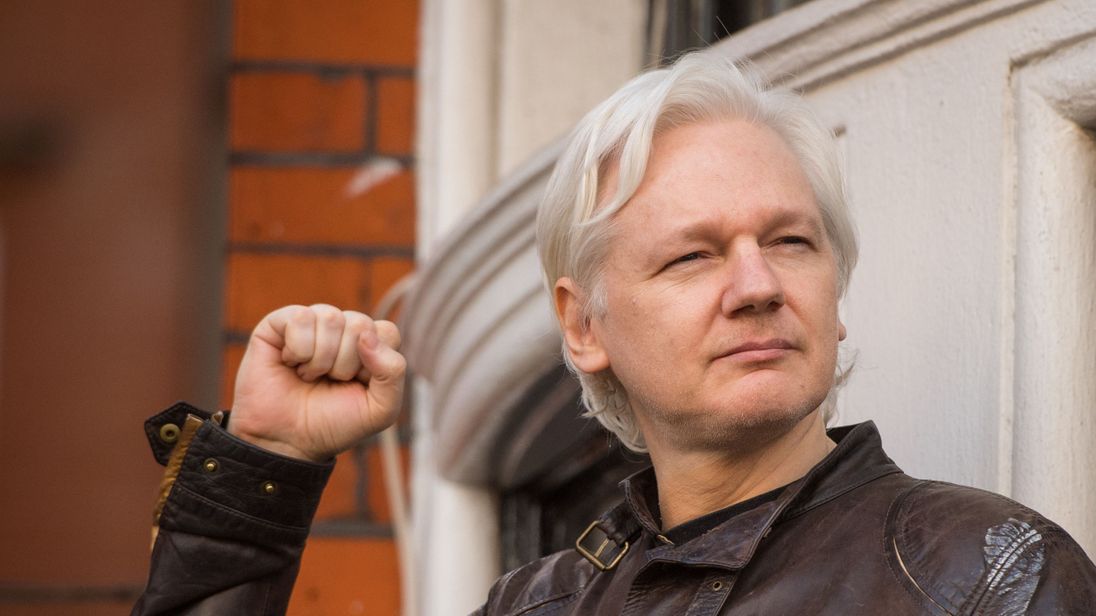 The statement released by the Justice Department declares:

“The new indictment does not add additional counts to the prior 18-count superseding indictment returned against Assange in May 2019.

It does, however, broaden the scope of the conspiracy surrounding alleged computer intrusions with which Assange was previously charged. According to the charging document, Assange and others at WikiLeaks recruited and agreed with hackers to commit computer intrusions to benefit WikiLeaks.”

Specifically, the DOJ release said the new indictment alleges that:

“In 2012, Assange communicated directly with a leader of the hacking group LulzSec (who by then was cooperating with the FBI), and provided a list of targets for LulzSec to hack.  With respect to one target, Assange asked the LulzSec leader to look for (and provide to WikiLeaks) mail and documents, databases and pdfs.  In another communication, Assange told the LulzSec leader that the most impactful release of hacked materials would be from the CIA, NSA, or the New York Times. WikiLeaks obtained and published emails from a data breach committed against an American intelligence consulting company by an ‘Anonymous’ and LulzSec-affiliated hacker. According to that hacker, Assange indirectly asked him to spam that victim company again.”

The indictment quotes Assange at hacking conferences encouraging hackers to obtain a “Most Wanted Leaks” list of classified materials that WikiLeaks sought to publish. Consortium News reports of the latest charges:

The superseding indictment says Assange was allegedly able to learn from “unauthorized access” to a website of this government that police from that country were monitoring him. The indictment says the source of this information was a former member of Anonymous who worked with WikiLeaks named Sabu, identified in the press as Hector Monsegur, who became an FBI informant after being arrested in June 2011.

In the same month, Iceland’s Interior Minister Ögmundur Jonasson prevented FBI agents from entering Iceland, testifying that “FBI dirty-tricks operations were afoot against WikiLeaks.” He said the agents had been sent to seek “our cooperation in what I understood as an operation to set up, to frame Julian Assange and WikiLeaks.”  The possibility remains that the new evidence against Assange was obtained in an FBI sting operation.

The new indictment repeats the existing espionage and computer intrusion charges. About the latter, the DOJ release said: “In addition, the broadened hacking conspiracy continues to allege that Assange conspired with Army Intelligence Analyst Chelsea Manning to crack a password hash to a classified U.S. Department of Defense computer.”

Assange was helping Manning sign in as an administrator to a system she had legal access to, not to access classified information, but instead to download video games, movies and music videos forbidden to U.S. military personnel, Assange’s lawyers argued during the first week of his extradition hearing in February at Woolwich Crown Court next to Belmarsh Prison in London. Assange is being held in the notorious maximum security prison on remand on a U.S. extradition request for 17 counts of espionage and the one for computer intrusion. LINK

Paul Craig Roberts, who has followed the legal trial closely, is particularly scathing of the US attempt to persecute and prosecute Assange.

“One thing the United States most certainly is not is a democracy.  A democracy requires an informed electorate, and the United States most certainly does not have an informed electorate. The American media, indeed, the entirety of the Western print and TV media, functions as a Propaganda Ministry for Washington and the ruling oligarchies.  The explanations are controlled to serve the agendas of the ruling elites.  The persecution and torture of Julian Assange proves conclusively that the First Amendment is a dead-letter Amendment…”

Nils Melzer, UN Special Rapporteur on Torture, has described how his investigation of Assange’s treatment liberated him from the false picture that has been created in order to establish the legal precedent that government crimes against humanity cannot be revealed:

“In the end it finally dawned on me that I had been blinded by propaganda, and that Assange had been systematically slandered to divert attention from the crimes he exposed.  Once he had been dehumanized through isolation, ridicule and shame, just like the witches we used to burn at the stake, it was easy to deprive him of his most fundamental rights without provoking public outrage worldwide. And thus, a legal precedent is being set, through the backdoor of our own complacency, which in the future can and will be applied just as well to disclosures by The Guardian, the New York Times and ABC News.

Even so, you may say, why spend so much breath on Assange, when countless others are tortured worldwide? Because this is not only about protecting Assange, but about preventing a precedent likely to seal the fate of Western democracy. For once telling the truth has become a crime, while the powerful enjoy impunity, it will be too late to correct the course. We will have surrendered our voice to censorship and our fate to unrestrained tyranny.” LINK

The move comes amid unprecedented attempts by both social media companies and the US administration to tighten their control over the media and alternative communication for their own respective purposes.

In the U.S gestapo telling the truth it’s an act of treason.