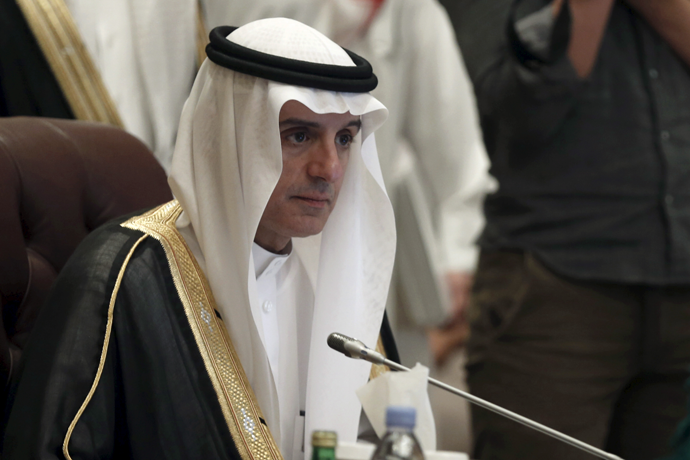 Breaking news: Saudi Arabia cuts diplomatic ties with Iran following yesterday’s protest and attack on their embassy in Teheran. The tensions were sparked when Saudi Arabia executed a Shiite cleric.

Saudi Foreign Minister Adel al-Jubeir said that in a time period of 48 hours all diplomats must return to their country. According to Al Arabiya TV, all Saudi diplomats have been evacuated from Iran and are currently in Dubai.

Saudi’s biggest Western ally, the United States, urged both countries to find a diplomatic solution to the tensions. However, according to sources close to Riyadh told Reuters that Saudi Arabia thinks that “enough is enough when it comes to Iran.”

It’s interesting to see what positions will the other big countries take as this conflict can easily escalate.

A potential war between the two countries could lead to unthinkable consequences and a big World War.

The Jewish-allies Al Saud are just as evil as the Zionist-supremacist. This is why Tel Aviv is the hospital of all of ISIS terrorist.

Yes most Arabs are terrorists. I agree.

Oil to $200 a barrel would benefit both US oil and Russian oil producers. All that Saudi refinery infrastructure and oil tankers would make nice targets for Iran’s missiles.

There was a time when Saddam Hussein and Gaddafi were friends of New York crowd. Later NY sanctioned their execution. US and Israel sees Saudis as disposable. Saudis are aggressive reckless . The opportunity to use Yemen as missile test ground against Riyadh is getting better all time. Cruise missile production will surge.

“Saudis as disposable?” Really? The largest oil producer? haha How lost is your rhetoric.

The oil will be there and production returned 3 years after a war. The US exports oil due to shale oil and horizontal drilling.The US can raise price oil by cutting Saudi supply. The Saudi assets can be confiscated by the West just like Gaddaffi and Saddam.The assets of Iraq and Saddam were confiscated but oil still reaches the market after Saddam removal . Billions of Saddam assets and Gaddafi assets were stolen .The House of Saud is worth more dead than alive at some point to Western capital. The Saudi oil will be taken later with terms favorable to West. Perhaps Gaddaffi and Saddam thought it was a joke. Libya thought if it sold its oil that it was protected. They believed Western promises and even supported Western politicians and had no nuclear defense.Iraq and Libya lost hundreds of billions . Saudis can lose trillions. Out with old in with new Western puppet but the money belongs to the Western Banks . Saudi are getting but kicked in Yemen . The Saudis will be thrown under the bus and Bankers distribute and keep the assets.You can keep laughing .Ha Ha Ha.

Soumar Iran Cruise missile will be in range of Israel and Saudi and its allies. Even with a turbojet the Saudi are in range of Soumar even from Yemen. The Iranians are working overtime on cruise missile production. 100 Yemen ballistic missiles at costing 20 million wiped out 5 billion dollars in Saudi miitary equipment. 1000 Soumar can wipe out 50 billion in assets . In mass production 1000 Soumar will cost less than 100 million dollars.Annual Iran military budget is in billions adequate for thousands of cruise missiles.

The Western Banks will confiscate Saudi assets if war starts. Except only money paid to Western allies will be allowed. Just like Saddam and Gaddaffi . The Saudis will be betrayed by Western Bankers.

The mindset displayed by the Saudi is disturbing. The execution of a Shiite cleric by the Saudi caused the protest at the Saudi embassy. The Saudi refuse to accept any criticism. Having so much money they were used to get their way. Now they are throwing a tantrum. Their leadership’s policy is increasingly defined by religion. This may not end well.