By 9:20 CET, August 14, 2018 we had received a couple of letters concerning our censored video from the YouTube Team. The latest letter was explaining the position of members of the YouTube Team on employment of age-restrictions on videos.

The provided explanation was not related to the content of our video. However, at about 9:30-9:40 CET, the age-restriction was lifted from “Russian Military Campaign in Syria 2015-2018“.

It looks like the initial situation with the age restriction of “Russian Military Campaign in Syria 2015-2018” was caused by some fake reports on “violent or graphic content that appears to be posted in a shocking, sensational, or disrespectful manner” in it.

Then, a member of the YouTube Team decided to place the video behind an agre restriction. This decision was made in violating of YouTube’s own rules and was likely motivited by some political views of this very moderator. 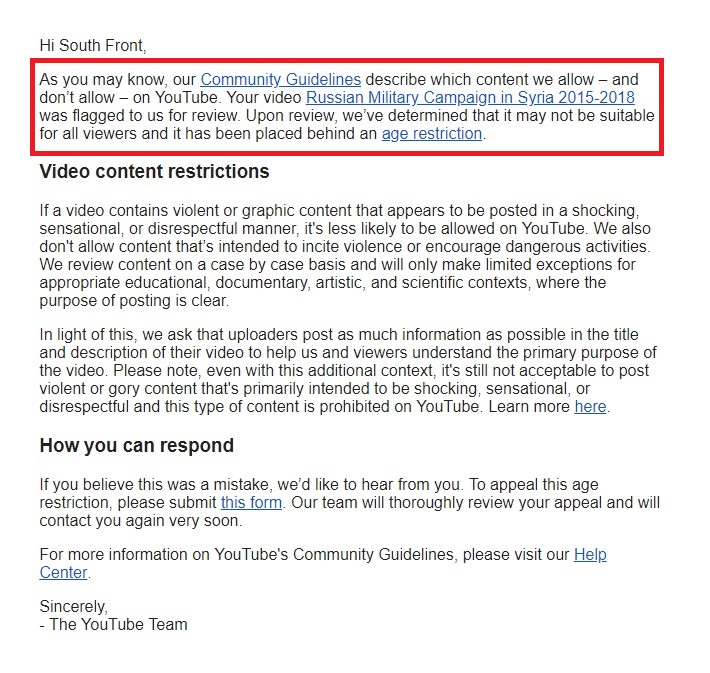 Explaining the decision, one of the YouTube Team specialists showed a unexpected vulgarity.

However, after the further correspondence with YouTube support, the situation was developing. Members of the YouTube Team reviewed “Russian Military Campaign in Syria 2015-2018” once again and lifted the age restriction from it.

We express thanks to competent members of the YouTube team that have solved this situation.

For our part, we understand a complicated situation including a possible pressure, in which YouTube moderators may operate. We hope that YouTube will strictly follow the principle of equal rights, freedom of speech and own rules employing them fairly and avoiding discrimination by any factors.

SouthFront once again wants to give a huge thanks to our audience for the warm support provided and to responsible members of the YouTube team.

SouthFront’s Further Work Will Not Be Possible Without Your Support

Jew tube will do anything.

Screw you rickety a O

I watched about an hour of the video, via the Saker’s website. I saw nothing wrong with it. If anything, I considered it to be a light version of was has gone down. I have been observing daily what has gone on there since the beginning of 2015, maybe late 2014. It has been a gruesome affair to witness. The destruction is incredible and the suffering of the Syrian people beyond description. The video contained none of the day to day carnage, that those of us who have followed the war have been witnessing.

Therefore, I tend to agree with SF on this one; a politically motivated banning. It was probably banned by one or more people, who have no stomach to accept that this is how the US et al does business. The banning was not a mistake in my opinion. It was an act of unpolished cowardice. I am happy to learn that the ban has been lifted. GO SouthFront!!

Its a very sober non-controversial video.

I would even say the video is in the absolutely light end compared to many other Youtube videos. But we already know the hysteria of liberals on anything that touches their false narratives.