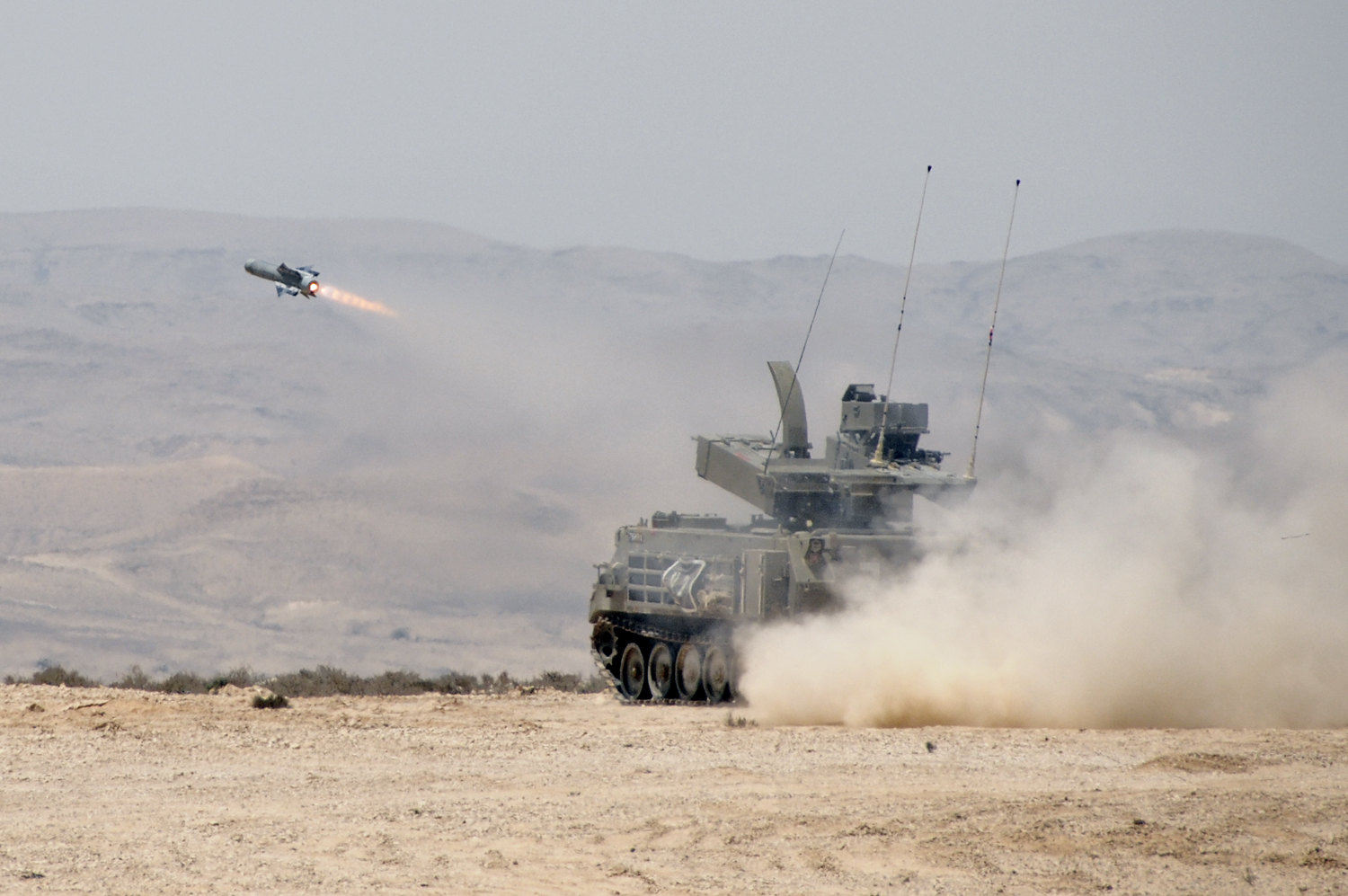 On May 11, an unprecedented Israeli attack targeted a network of observation posts and positions of the Syrian Arab Army (SAA) in the southern Syrian governorate of al-Quneitra.

In the early hours of the day, the Israeli Defense Forces (IDF) struck an SAA observation post in the outskirts of the town of Hader. The observation post, which is located near the separation line with the Israeli-occupied Golan Heights, was reported targeted with a number of ground-launched precision-guided missiles.

Less than twelve hours after the missile strike, the IDF artillery fired more than 15 rounds at observation posts and positions of the SAA near the town of Jubata Al Khashab.

The targeted positions were all located within or along the Golan Heights’ 235 square kilometer buffer zone, which was established under the 1974 separation of forces agreement. The United Nations Disengagement Observer Force is present in the zone.

Exactly a week earlier, the IDF threatened the SAA over alleged deployment of forces within the Golan Heights’ buffer zone. The IDF’s 210th “Bashan” Division dropped leaflets from drones over the buffer zone, promising to response with an “iron fest” to any violation of the 1974 agreement.

Israel struck several observation posts and positions of the SAA in al-Quneitra in the past few years. However, previous attacks were carried out under the claim of preventing Lebanese Hezbollah from operating in the region.

Israel’s use of the 1974 agreement to justify an attack on Syria is likely a part of a new strategy. Tel Aviv may be preparing to use the alleged violations of the agreement as a casus belli to launch a limited ground operation in the buffer zone.

It’s worth noting that the IDF is currently counducting its largest military exercise in decades. Thousands of troops from all IDF units are taking part in the exercise, codenamed “chariots of fire,” which simulates a multifront and multidimensional war against Israel’s enemies in the air, at sea, on land and on the cyber front

We are heading straight forward to WWIII and nobody realizes that! Its seems Goverments Worldwide instead of beign cautious and pragmatic are becoming crazier and pushing forward their hard power. This is going to end very bad to all of us in the end. Some Big Power should call for peace or we are lost.

Russia should offer up a ceasefire along the lines of actual control and then engage in protracted diplomacy regarding the permanent status of Luhansk, Donetsk and Crimea.

Such a moral high ground position would create divisions within the western block.

But I agree one of the great powers must initiate the Peace. Let it be Putin.

Not really. There is no ‘western block’ only the US and bunch of puny vassals who obey whatever the US order them. Putin can offer whatever he want, the US will never accept it (nor its vassals in Kiev).

Russia has stated the obvious already: The west doesn’t want Peace. Take your conclusion sir. There won’t be any peace in Ucraine between any “great power”. edit: till russia has archived their goal

“and nobody realizes that”? Many realize that, but what can you do…

They don’t have enough population to fill these places. lol

They cannot populate it.

They have plenty of decrepit people who live off US welfare in settlements, they can easily populate the Golan Heights. They also know once Iran gets their nukes it will be game over for Jewish illegal settlements all over the Middle East.

Basement dwellers are not against nukes it seems.

Don’t worry they will find them from New York and London,or anywhere they can find some fake jews.

Have you been to Israel? They say the national bird is the crane bc there are construction cranes everywhere. The Jewish population of Golan has grown over the years. It is not as big as Druze due to natural increase and the immigration into Israel of Druze who marry locals. I do not think Israel wants a war over this land. But to say they could not populate it is wrong.

It is enough, this is just pure bullying and terrorism. Who can stop them now…

It might be that Israeli hardliners are under the misguided impression, they can take down Syria. For sure, Russia is busy elsewhere, and Israel will certainly also be instructed to stir up trouble at the Southfront… It’s certainly cowardice, since Syria is in no position to resond in kind. It’s possibly Israeli war-hungry imperialists that want a war with… not just Syria, but Iran.

And there we go promoting Iran. Propagandalf.

Shut your hole for once, jens. Take the rest of the week off. Nothing you type convinces anyone of anything. You just Pissusoff with your unending stupidities.

Iran has American jet fighters that only fly because Israel sold them the spare parts. Never heard of Iran Contra Affair ? Of course not since you don’t read anything but the latest propaganda from “television news”.

Israel faces existential threats perennially. Iran has vowed to nuke Israel as soon as it has that capacity. That capacity is nearly at hand.

Putin should declare ceasefire in Ukraine but he should let Israel and Iran resolve their issues without outside interference.

Iran and Turkey want to invade Middle East and create chaos in general.

Actually, Putin doesn’t owe you anything to the Jews!! You owe it to the whole world!

Buddy Iran can take Israel out with missiles, hell even Hezbollah can do it. Hezbollah listed a bunch of military, economic, and nuclear targets they’ll hit. After those out, a lot of Jews will leave, that’s what “destroying Israel is”

In the beginning yes. In the end?

Pure bullshit: the highest levels of their government intelligence agencies were involved in selling weapons and aircraft parts to Iran and they all made millions. It’s a Big Game to keep the money flowing to the arms merchants worldwide. Iran Contra Affair- only the money didn’t really go to the contras, it went to everyone involved pockets, as usual.

RUSSIA REFUSES TO ARM SYRIA AND IRAN WITH AIR DEFENSES AND LONG RANGE MISSILES. THEY WILL PAY A PRICE FOR THIS COWARDICE

zioonist thugs ae trying to divert thier failure in palestine. and they want world to take thier attention in syria .

The world sees Israeli terrorists attacking an ally of Russia with impunity, and rightly the world concludes that Russia is lead by weak old eunuchs and thus not a dependable partner, so they decide it’s much safer to just continue being under USA’s grip. Russia has the capacity to do something, yet it doesn’t, obviously we can see why Kurds and many others choose US as their “protector”, very sad.

It is not like that. Many Israeli citizens are Russian. Russia want to kick Iran out of Syria but in a more indirect way.

You don’t know anything about the Israeli population demographics whatsoever. Many Israelis are from Russia and they are employed in high tech jobs there. Go read a little bit Einstein.

Have they located Hezbollah drone yet, or the iron dome radar still didn’t pick that one up yet?

I dont think you have the full grasp of the word Unprecedented. Something that happens on a every other day basis is surely not unprecedented.

Putinyahoo
Reply to  The maharaja

This type of escalation doesn’t help. Personally, I support the Israelis, the Syrians, the Lebanese and the Jordanians but not the Palestinians.

Personally, I think the only Greeks with intact manhood live in Cyprus and the former Soviet Union. Motherland Greeks are absolutely castrated slaves of Zionists and the West with no ability to think critically or stand up for yourselves. Both Plato and Leonidas would be deeply ashamed…

The basement dwellers have no manhood so probably you are judging from yourself.

Chariots of fire is supposed to be a morale boost after Hamas has been conducting all successful mission deep inside Israel. Anyone who understands what’s happening in the Middle East knows that it’s literally impossible to stop thousands of ballistic missiles who’ve already been battle tested in Iraq on Mossad and US bases and also rockets coming from multiple fronts. First thing israel should do is figure how Hezbollah, a militia was able to domestically produce the Hassan drone with no outside help and mange to record multiple military targets undetected for 40 minutes before Israel thinks about taking on multiple fronts.

New leaks show that USA has hidden thousands of PGM/JDAMs in Israel for when they go to war with Hezbollah or Hamas. The fact that USA has to do this because Israel with weapons they currently posses can’t beat a militia says a lot about the Israeli army. If Israel needs an additional stock pile to fight a militia, how the hell will they fight Iran?

All missiles and projectiles leave seriously harmful chemicals and radioactive elements as debris on the entire area. You think our Creator believes that it’s okay to destroy the Environment ? What happens when these poisons get into the water and food of your own populations with these residues, as it is inevitable that wind and rain move across regions? Does common sense or the ability to Think and use Reason enter your mind?

VLAD POOPTIN, GREAT ALLY OF ISRAHELL, LOVES WHEN ISRAHELL BOMBS SYRIA. THE CHILDREN OF LUCIFER NEVER HAVE TO WORRY ABOUT BEING SHOT DOWN OR COUNTER-ATTACKED

Really sucks that Syria can’t stop Israel’s provocations and violations of international law, and drive them out of the Syrian Golan Heights.

Some day a whole world understabd that Khazars have no historical, no moral rights to murder real Semitic people – Palestinians.

No right to conduct ethnic cleansing against real Semitic people. And Apartheid II regime will end the same way as South African Apartheid I regime.

Just one more result of Putins restraint. They believe they can get away with anything. Just wait for attacks on transnistria, karabakh, syria and wherever they feel like.

They will set the world on fire because they feel 100% sure that Putin will do nothing as long as no nukes are send his way.