Several leaders of militant groups were killed by a group of unidentified armed men in Idlib and Dara’a provinces. 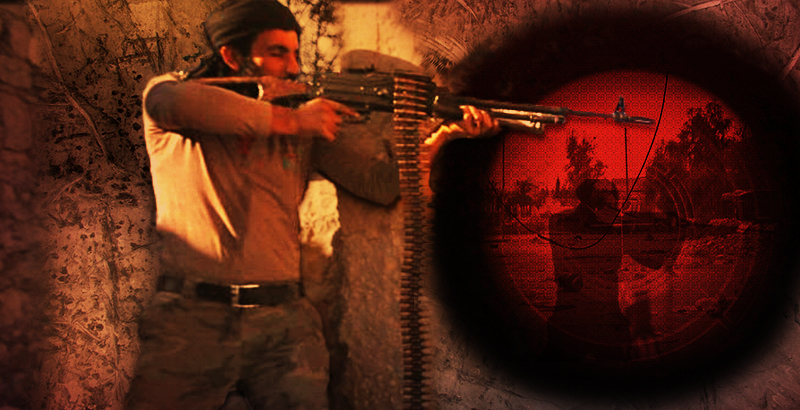 A wave of attacks on field commanders of various armed groups and their bases has been once again spotted on militant-held territories in the northern parts of Syria, where several areas of Idlib province were struck, as well as in the south of the country, where terrorist leaders were attacked in the western areas of Dara’a province.

According to the Step News news agency, today, a group of unidentified armed men attacked one of the bases of the Free Idlib Army, which belonged to the Al-Furqan detachment and was located in the area of Maarrat al-Nu’man city in the south of Idlib. As a result of the attack, commander of the detachment Ahmad Ali al-Hattyb and commander of jihadists, who operate in the north of Hama, were killed.

As it was reported, the attackers arrived by four vehicles. They launched their offensive early in the morning, when almost no one was on the base, as all fighters of the Al-Furqan detachment were on positions in Hama at that moment. Before leaving, the attackers looted the base of militants.

In addition, unknown armed men also attacked a checkpoint of the Ahrar al-Sham terrorist group, located near the administrative border between the provinces of Hama and Idlib. As a result of the attack, one terrorist, Mustafa al-Djidan, was killed. The unidentified group also blew up an explosive device in the town of Binnish, located near the besieged towns of Al Fu’ah and Kafarya, wounding several people.

Moreover, last night, an unsuccessful attempted assassination of a commander of Islamists took place in the city of Nawa in the west of the southern province of Dara’a.

It is still unknown, who is behind these attacks. Some opposition activists accuse agents of the Syrian government, while others blame on the foreign Special Forces.

The best way to defeat the terrorists is to terrorize them!

if you answer to terror with terror .. terror wins. :-)

You are stupid. According to this logic: If you fight an enemy – the enemy wins!

You can’t expect everyone to know the neoliberal moron Justin Trudeau has said “If you kill your enemies, they win”!

I didn’t “get the irony” because you made sure that it couldn’t be gotten by anybody who’s ***not*** reading your mind.

The Fing News
Reply to  Spunkyhunk

“If you kill your enemies, they win” has said Canadian PM Justin Trudeau! John Whitehot was being ironic of western governments as YOU SAID “You are stupid. According to this logic: If you fight an enemy – the enemy wins!” which is exactly what western neoliberal leaders are! Stupid!

Spunkyhunk
Reply to  The Fing News

One correction I’d like to make here: Western neoliberal leaders are NOT “stupid” at ALL! On the contrary – they are smart and evil sociopaths, who only AFFECT stupidity when addressing their dumbed-down, brainwashed, sheeple populace.

Yankie
Reply to  The Fing News

Liberal Ideology is a Cancer to any society! How Can Anyone Expect To Fight An Enemy Who’s Clear Objective Is To Annihilate You, Rape Your Woman & Be Sold As Sex Slave, Behead You, Torture You, Kill Gays, Kill Jews & Christians….All That For The Sake Of Allah Following The Genocidal False Prophet Muhammad Who Commands His Followers (Muslims) Saying: “I WILL CAST TERROR INTO THE HEARTS OF THOSE WHO DISBELIEVED SO STRIKE [THEM] UPON THE NECKS (BEHEAD) AND STRIKE FROM THEM EVERY FINGERTIP.” Quran 8:12

This is great news, if it keeps going on like this, the war would finish sooner than expected. They have to focus on being undetected and get higher level targets, pinpoint areas for airstrikes if they can’t finish the job. Leadership of the moderates need to be targeted, once they are weak enough, finish them off then you can focus on DAESH.

I wish there were an unidentified group of forces that will eliminate the main cause of evil on Earth, starting with rothschild, soros, the 300- club. clinton, obama, kerry and palls not to be missed.

The only SOF capable of such smooth precision attacks by vehicle would be the Spetsnaz and FSB Alpha with a fair number of Chechens for disguise and local cover. They are probably embedded with Syrian Mukhbarat and SAA Army SOF. Good on them. Unlike Western SOF they seem to have accurate intelligence as they are able to eliminate their targets with ease. The Russians are really brushing up the covert and clandestine warfare skills in Syria!!. Godspeed and happy hunting!

Too little to draw conclusions. It could be an internal power struggle for all we know.

This is getting interesting…