Two FAMAS assault rifles with ammunition have been stolen from a vehicle of the French Army by two unknown persons. 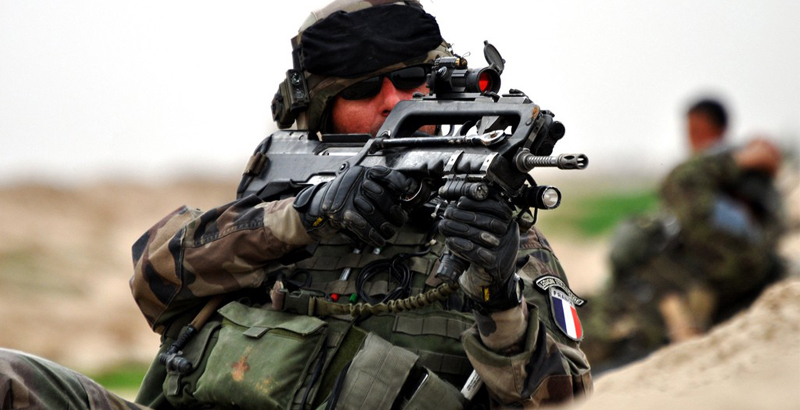 On Thursday, two unknown persons broke a window of a van of the French Army and stole two FAMAS assault rifles with ammunition, the Zone Militaire information website reported. According to the website, the incident occurred during a stop of a column of vehicles of the French Army in a parking lot in La Verpillere, Isere.

According to the Dauphiné Libéré newspaper, it is possible that the criminals followed the van, though there were no “recognition marks” on it.

As soon as it became known about the theft, all units of French gendarmerie in the region were raised for search of the loss and thieves. Reportedly, a helicopter was also involved in the operation.

After the square was cordoned off, gendarmes discovered a car of the criminals on a street of Villefontaine town in the evening of the same day. However, the FAMAS rifles, as well as those, who stole them, were not found, despite the area’s cordoning and car inspection.

The Grenoble’s Investigation Department is currently investigating this crime. At the moment, the basic version is a criminal one, a terrorist variant is not considered.

Last week, unidentified individuals have stolen the Renault Premium truck with a trailer, on which the Terex TL210 bulldozer was placed, from the 25th Sapper Regiment of the French Air Force. Since this time, nobody has seen the truck with the trailer.

First theft of large truck from French air force and now this. French navy may be next. What will be taken next? No wait, their pride was stolen in 1940!

you live in which country? england? russia? united states? if not, maybe shut the fuck up:) learn some shit about forces françaises libres (FFL) and forces français de l’intérieur (FFI). but i don’t deny the strange defeat in may 1940. we were betrayed by our own elites since the beginning of 1930s..

After landings in Normandy, in August of 1944 FFI (french resistance) staged uprisings against German forces in Paris and French 2nd Armored Div. moved in to help take city. Hitler’s plans in Europe where like dust in the wind. :)

Jean Moulin is no shit

There’s not much shit to learn about FFL/FFI apart from the state propaganda on a non-existant “résistance”. Another thing: why do you say “we” if you’re clearly not French?

opinions are like assholes, everyone gets one. Harry Callahan. Dirty Harry. clearly you don’t know much about homeland resistance. but i agree one point: the state propaganda over estimate the importance of the resistance. like american’s role: Russia fought more and more trained soldiers on the east front. Russia won the war, at least as much as united states (who won against japan) why wouldn’t i be french?

France have had betrayed Czechoslovakia in 1938 and your shameful fast defeat in 1940 was just the result…..

I think France should create a poster of Hollande dressed as a mime, wearing a beret, striped white/black long sleeved shirt with arms outstretched with a caption that says “France welcomes Muslims from all over the World! We apologize for The Battle of Tours and please understand that Charles Martel does not represent the French People!” This poster should be distributed thru out the Muslim world.

Just how incompetent are the French armed forces! What could a serious unit like the SAS do with these guys – answer sow total and utter chaos and do tremendous damage within no time at all. Time to get serious France and protect your assets as your guys are sleeping on the job.

The reactions below are just idiotic. Doesn’t it occur to you that the reasons for these events could be very different. In many countries you wave a bunch of dollars and you can get any weapon you like. Just maybe the French Army controls its weapons better than others. So you can only get them by literally conducting a kind of commando mugging on actual soldiers. There is a huge black market for good weapons, and it would be interesting to see stats from other countries how many weapons get stolen as well as the black market estimations. Don’t forget E-Aleppo revealed plenty of German weaponry. And it may be that many countries refuse to admit that weapons go missing (they try to avoid the embarrassment)! It is very murky world of statistics.

Those who are having fun of French of that are just naive or idiots. Every country has its misery. The US for example have never won any war so far, WW2 was won only thanks to Russia. And even so, the first World Power is submissive to Israël which is a pirat State, so those who are treating French of cowardice and incompetence should watch themselves in a mirror first.

Two French Assault Rifles. Never fired, and only dropped once.