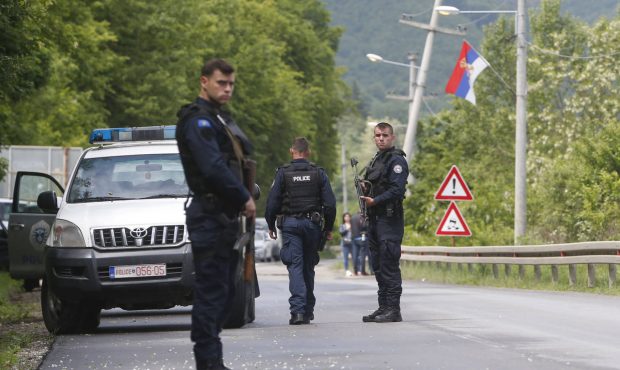 Serbian army vehicles and troops were moving from a central Serbian city towards the border with the Autonomous Province of Kosovo and Metohija (also known as the self-proclaimed Republic of Kosovo), Serbia’s official news agency Tanjug said.

The movement started around noon on May 28th, after Kosovo’s special police carried out a heavily armed operation in the Serb-dominated northern Kosovo, arresting 19 and injuring six civilians and five policemen. Of the 19 arrested, 11 were Serbs, four Albanians and four Bosniaks.

Two members of UNMIK were injured in the Kosovo police action.

Special Prosecutor Sulj Hoxha claimed that the Prosecution heard and received statements from a significant number of witnesses, whose testimony contributed to the operation.

“After a year of activity and gathering evidence, the prosecution requested permission from the Basic Court in Pristina to put under control the suspected houses and shops,” he said.

The director of the Kosovo Police Inspectorate Miradija Kelmendi said that in cooperation with the PK, they applied an operational plan from the Basic Court order to detain several police officers in the northern part of Kosovo.

“The suspects allegedly took part in criminal offenses such as illegal trafficking of goods, misuse of official powers and participation or organization of a criminal group,” Kelmendi said, adding that during the operation, searches were carried out at 12 locations.

Kosovo Police Director Rasid Calaaj said that the operation was successful and that two people were wounded by a gunshot, while three more people were injured, all members of the PK.

He said that the UNMIK members, a Russian and his associate, a local Kosovo official, were detained because they were part of the UNMIK vehicle part of the barracks in Zubin Potok. UN spokesman Farhan Hak said that the two men were injured during the operation and that the Russian was in the hospital.

Kosovar President Hashim Thaci said that a Russian citizen who was “camouflaged as a diplomat in order to prevent the police operation” was among those detained.

He tweeted that the Russian diplomat would be treated according to international conventions, claiming that there was a “Russian agenda aimed at destabilizing our region.”

#Kosovo institutions will treat the case of the #Russian ‘diplomat’ in accordance with international conventions. #Kosovo and regional countries are familiar with the Russian agenda to destabilize our region. RH

Around 7 PM local time, the Russian UNMIK official was released, but the Kosovo one was still held.

The KFOR (the NATO-led peacekeeping mission) said that the action in northern Kosovo was “exclusively a police operation” and that the Kosovo Security Force “or any other military force was not deployed in the north of Kosovo.”

At the same time, Maja Kocijancic, a spokeswoman for the EU High Representative for Foreign Policy and Security Federica Mogerini, confirmed that European officials in contact with Pristina and Belgrade’s leaders appealed for maximum restraint.

Later on in the day it was claimed by KFOR spokesman Colonel Vicenza Grazo that the Serbian authorities were informed that the operation would take place  and that “there was no surprise.”

“Yesterday the situation was under control and we constantly followed it. We had good exchange of information and we were in contact with the Serbian authorities,” Graso said.

KFOR spokesman denied that the Hungarian contingent of KFOR tried to react during the action, but was prevented from the commander of those forces.

Serbian President Aleksandar Vucic said in the Serbian Parliament that during the operation in northern Kosovo, the Hungarian contingent of KFOR tried to react, but that they were prevented.

The Russian Foreign Ministry slammed actions of Kosovo forces as a provocation saying that Pristina’s man aim is “to intimidate and force out the non-Albanian population and forcibly establish control of the area.”

In February 2019, Serbia pushed for further improvement of its capabilities by receiving 4 more MiG-29 fighter jets from Belarus.

Serbia now has 14 fourth-generation MiG-29s, which Defense Minister Aleksandar Vulin placed among ‘the most modern aircraft in the world. It has 14 fighter jets and 28 attack aircraft.

In 2019, the Serbian Armed Forces are also to receive seven new helicopters from Russia, specifically four Mi-35s and three new Mi-17 transport helicopters, along with nine Airbus H-145 helicopters for the army and police.

Belgrade is persistent in its military neutrality and does not want to join NATO, but nonetheless has an Individual Partnership Action Plan (IPAP) signed with the Alliance and partakes in joint programmes and activities. As of 2019, support for Serbia’s accession stands at 7%.

On the side of Kosovo, it has a significantly smaller “army,” with 5,000-strong active personnel and 3,000 reserve. It is also relatively new, since in December 2018 the Kosovo parliament accepted a resolution to turn the Kosovo Security Force into the Kosovo Armed Forces.

The move was seen with skepticism by Serbia and by NATO, European Union and United Nations officials, but it has been endorsed by the United States, as well as the governments of Germany, United Kingdom and France.

Generally, the Kosovo numbers don’t matter all that much since in the case of an escalation NATO and the US would most definitely join in against Serbia. This is also why Kosovo is allowing itself to act the way that it does.

A significant issue is that Kosovo is a hotbed of radical Islamists returning from fighting in the Middle East, many of them also appear in its armed forces.

This is further reinforced by the fact that the authorities have little control over the situation. According to figures from security experts, 50,000 Kosovars are now members of conservative Islamic groups. This is also by no means a recent development, it dates back to 1998 when al Qaeda-linked elements supported the NATO-backed “Kosovo rebels,” while Yugoslavia was being split by the Western establishment and Serbia was being bombed by NATO.

Another Military Escalation In Europe

Serbia On The Verge Of War With Kosovo

Good, perfect excuse for them to be pulverized by US Airpower US will protect its Kosovo allies

Yakov Wohlstein: perfect example of an irrational zionist Mega Honker You need at least 10000 nasal doctors to make ur nose smaller by only 2 centimetres it would be largest nose surgery in world human history XD but if u exhale all doctors would be “pulverized” by your monstrous NASAL POWER LOL gtfo you ugly kikelord

Couldn’t have said it better myself, if Jacob chooses to ignore the UN security council and exhale, he could commit atrocious war crimes against medical personnel operating in his nose region

Stupid fucker. How mind-numblingly inbred does a murican cracker need to be in order to support Albanian drug-cartel terrorists?

Kosovo, a place sacred to Serbs, is the tinderbox for conflagration. All the omens are for war – world war. https://www.ghostsofhistory.wordpress.com/

Serbia president is a pro western president..so therefore Kosovo gangs can liquidate serbs in Kosovo and serbian army will not do anyting!…