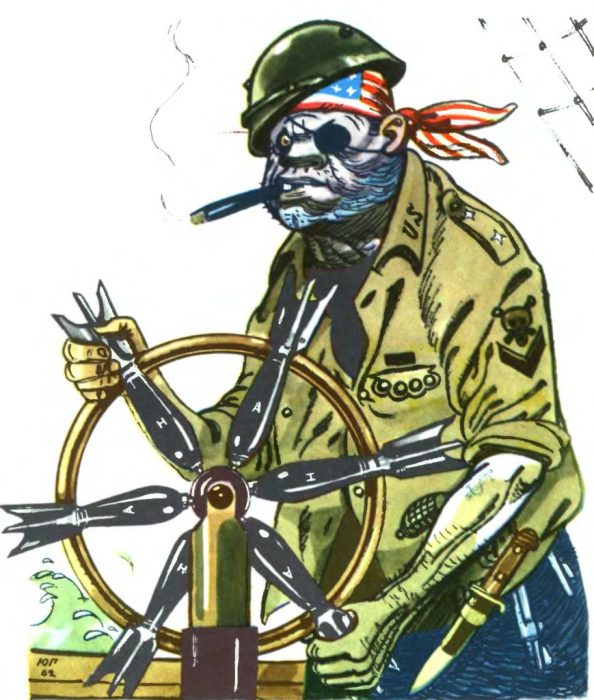 The United States (and Ukraine too) voted “no” on the UN resolution against the glorification of Nazism presented by Russia to the United Nations by Russia. The document was presented for the first time last November and was approved with 121 votes in favor, 53 abstentions and two votes against: United States and Ukraine.

The text, in November, was contested by the Ukrainian delegate to the United Nations for allegedly “clear manipulation of historical narratives”. The vote was repeated during the session which took place on 16 December 2021. It was approved once again. The document, this time, obtained 130 votes in favor, 49 abstentions and two votes against. As always, the United States and Ukraine have said no to the resolution entitled: “Fighting the glorification of Nazism, neo-Nazism and other practices that contribute to fueling contemporary forms of racism, racial discrimination, xenophobia and related intolerance”.

Sooner or later, the lies catch up to the people. Re-reading the statements made by the US diplomatic corps, it’s possible to understands the strategy. This motion has been under discussion for over a year. In November 2020, Jason Mack (Counselor for Economic and Social Affairs U.S. Mission to the United Nations) stated that, “the United States Supreme Court has consistently affirmed the constitutional right to freedom of speech and the rights of peaceful assembly and association, including by avowed Nazis, whose hatred and xenophobia are widely scorned by the American people”.

Hence, the vote of the United States was explained as necessary in order not to contradict the dictates of the American Constitution. In the same text, however, it was also explained that, “ the United States must express opposition to this resolution, a document most notable for its thinly veiled attempts to legitimize longstanding Russian disinformation narratives denigrating neighboring nations under the cynical guise of halting Nazi glorification”. A politically weird position, considering that the United States had passed resolutions against the glorification of Nazism every year from 2015 to the present.

The US vote against russian paper was announced last November 12 by Nicholas Hill (Deputy U.S. Representative for ECOSOC). Here’s what the American diplomat said: “The United States must once again express opposition to this resolution, a document most notable for its thinly veiled attempts to legitimize Russian disinformation campaigns denigrating neighboring nations and promoting the distorted Soviet narrative of much of contemporary European history, using the cynical guise of halting Nazi glorification”.

The explanation for the US vote at the United Nations is simple. Today’s enemy is Putin’s Russia. Anything can be done to counteract it. Also don’t repudiate Nazism. With a solitary vote, a vote cast against almost the entire international community.

Military Situation In Region Of Donbass On January 29, 2023 (Map Update)

Hi Shlomo. How is the weather in Tel Aviv?

You are an idiot if you can’t see by now.

Hmmm Absolutely why you jealous?

The word Shlomo comes from the aramaic language which was spoken by the Assyrians.

You are exactly right. They are playing their dutiful part for the synagogue of Satan which is the ultimate evil.

Not sure what you mean. Perhaps you don’t know what the Synagogue of Satan is.

Pretty telling isn’t it… Shame on the crumbling americant pedonazi empire and Ukropistan.

Boy! They have you totally screwed up. You actually think there are good guys and bad guys.

More proof Russia and the u.s. are two peas on a pod.

There are no good guys.

You’re putting anti-free speech propaganda (freedom of speech is a good thing not a bad thing; in fact, defining hate speech is a slippery slope), under an literal propaganda (Japanese WWII ?-) pic to make a point against a resolution which contains propaganda also. Why not just criticising ad rem, without the prop ? Lots of readers of South Front are westerners and are not warmongering fools. In fact, how many anti-Russian protests have you seen in the West ? Right, none.

Nazis were horrible, they did it to Jews and Holocaust ®ᵀᴹ and stuff and all of them and their families and their families’ families must be exterminated, but since I hate Russia even more than I hate ’em so shut the fack up Russkies and leave ’em alone!

I’m a nice person, I love free speech… … as long as they don’t mention Palestine. Now that’s something hateful, anti-Semitic and war-mongering. … Or don’t talk about biology, pesky things like how chromosomes define our gender or how different people have different abilities and weaknesses. You are weak! … Oh, and not to mention religion. Anybody mentioning any religion other than mine should be banned!! But I’m all for making fun of other people’s religion, free speech and stuff… … Or, peace. Nothing’s more dangerous and resentful than peace. … And pollution. Everybody knows that stripping earth of what’s inside it is safe, right? Anybody who says otherwise is the enemy of free market and freedom and has no right to speech, let alone free speech. … Or the lovey-dovey people who want to be-friend every and each country and talk nonsense about cooperation and common interests. You are either with us or against us! … Oh, I almost forgot Eye-Ranian, Syrian, diaper-heads, Eye-Raqi, Afghanistani, Cuban, Venzuelan, Russkies (did I mention ’em?) Chinks, Towelheads, Gooks, Browns, Ay-Rabs, Turks, Krauts, Niggers, Jews, Froggies and other terrorist scum. Kill ’em all! … And idiots who want to reduce military spending. Traitors! … Or the ones who want to take away my guns by saying it should be regulated. Say that to my face if you dare! … And the idiots who took Hoaxpox jabs, augh… they are the worst… and the ones who say Wuhan Flu is not real. It’s made by CCP and it kills ya idiots! … And a few other things I can’t be bothered with right now or haven’t think of yet. Other than that, I love free speech!!

Of the years I’ve read Garga’s post here on SF, not once I recall Garga losing his temper; NOT once.

Of course it took place you fucking idiot,was Auschwitz a holiday camp for deprived jews?my Dad who served in WW2 went into Bergen Belsen in 1945,i know he never forgot what he saw there,how old are you ten?

Why would the Americans condemn Nazis,they are Nazis.

A Fellow
Reply to  Cromwell

I certainly won’t condemn Nazis. I’m not a Zionist.

S Balu
Reply to  A Fellow

S Balu
Reply to  A Fellow

Cromwell I salute you this is PURE AND SUPREME TRUTH

Of course every sane person condemn nazis: Hitler killed 50 million white Europeans and planed to slaughter at least 150 million more. He completely destroyed Europe, actually Europe is STILL under occupation thanks to him. He worshiped Britain, probably was their agent since 1912… and yeah he killed some Jews, but only poor and irrelevant. Every important banker, tycoon, intellectual was safely evacuated to America with full nazi support. Hitler’s actions effectively created Israel and his real father was Jewish. Quite possibly he spent his last days in Argentine, protected by CIA, like so many other high ranking nazis. Now he is laughing from hell to braindead imbeciles who still worship him for some idiotic reason. Especially these utterly autistic degenerates from so called Ukraine, if he won they all would be exterminated by now.

Author should wake up! The same vote against glorification of Nazism and Nazis is proposed by Russia every year since at least 2014! And USA votes no every time – to protect their nazi children they raised up in Ukraine, Lithuania, Latvia, Estonia!

A Fellow
Reply to  Dawn

I certainly don’t like US influence in those countries. I’d prefer to just grant them nuclear weapons instead, and then leave them alone.

For the US human rights issues are simply tools to use against its enemies. It conveniently forgets them when they apply to itself or its allies.

Communism is a far worse ideology than Nazism, as is Islamism.

What say you Iron Zion and friends?