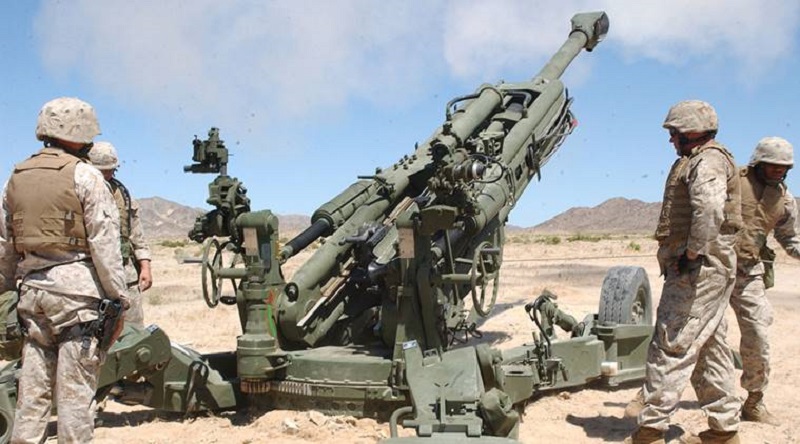 Reports are circulating that  yesterday the US army made some very unusual movement at the Syrian-Jordanian border, north of Jordan’s Al-Mafraq Governorate.

Local sources said that about 20 US Army armoured vehicles (including battle tanks and artillery pieces) carried on trucks were spotted in Al-Mafraq. US troops were allegedly accompanied with the Jordanian Army’s 3rd Division.

Menawhile, ISIS carried out a large attack against the US-backed Free Syrian Army (FSA) in the Syrian desert. The US and Jordanian special forces took part in repelling of this attack. Locals from Al-Mafraq have talked about hearing a large number of explosions and jets flying on the Syrian side of the border.

Some experts describe this as indication that the US is preparing a military operation against ISIS in this area.

It’s important to note that the US Ro-Ro ship Liberty Passion had arrived to the Jordanian port of Al-Aqapa few days ago. This event followed a meeting between the Jordanian King and the US president. These two facts support the idea that the US-led coalition could launch an anti-ISIS operation in southern Syria from the direction of the Syrian-Jordanian border. The goal of the operation will likely be to get control over the Syrian-Iraqi border and to reach Deir Ezzor. The operation will involve FSA members trained in camps in Jordan and the US-led coalition’s forces.

SF forecasted a possibility of this option in March:

lol what are you smoking ? USA has control of all lands on this planet (except Russia and China of course…maybe India too..)

I don’t agree. Actually the USA is owned itself. Its military respond to someone who does not answer to the American people

You are right. The SAA offensive to link Palmyra to Deir-Ezzor along the m20 highway is already shelved.

I have been saying for over one year now, that unless the Russians and the Iranians are not seriously stepping up the help to Assad, there is no way Assad and his troops can re capture more than it currently has. I have also predicted ( and took heavy flack for that) that Syria will be portioned in at least 4 zones of influence; one controlled by Israel in the south west corner which will be eventually be annexed to Israel for further colonization, one under Turkish control in the north and around Idlib, and one in the east controlled by the Saudis and Qatar through US.

Russian will not risk more soldiers deaths and financial expenditure than it already has; if they can keep the coastal area for Assad and the central area, I think they will cut a deal. Iraq will be dismembered too pretty soon in at least 3 parts as well. Syria is not a monolithic state as Vietnam or Korea was. That makes is fairly easy for various warring faction to intervene and carve up territories.

It is more likely to happen then not. So far there is nothing to stop them.If you read up around here its a letter from some Iranian paper and a few ignorant posters who have no idea what the reality on the ground is adn thats the resistance to foregin forces. Turkey moves at will as does the US. This site has had a lot of good information, polluted by ignorant posts as of late but you still find a nugget of info here or there. I guess for the SAA the good part is they have far less land to win back. In the end still way too many questions, will Russia be happy with a third of the country? Will Turks tolerate a Kurdish state? The idea that anyone is opposing the US or Turkey is just that and nothing more. Until something real happens to oppose the US there is no possible other outcome than the one the US chooses. The only way that changes is if the cost of the US wanted outcome is to high to pay. Currently its pretty much cost nothing.

After the terrorists are finished off, the Turks need to be kicked out. The whole strip ought to be given to the Kurds, with token Syrian presence on the Turkish-Syrian border.

Dier Azzor could still be held , if held by Russian troops , I don’t think the Americans want direct conflict with Russia . But all of Dier Azzor must be held , with the air field . We will see how Putin responds .

For sure Deir Ezzor will hold. Do not listen to these trash talking trolls. After the weak missile strike they think US will take all of the Middle East !! LOL

No, even in held by Syrian troops.

Remember, “mistakes” may happen. I mean, plausible “mistakes”. “You should not have been there at all”.

i am afraid too, hope that does not happen

That’s the plan – partition with corridor from Jordan to Turkey for Qatari pipelines.

Russians need to hurry up, americunts are coming

Yep, coming after you.

Only thing you are getting is big fat cocks, Amerifags.

Looks like FSA has more territory to control (open Syrian desert) than they have troops to control it. ISUS should not be this close to the Jordan border according to the maps. Let’s hope for another FSA set back in the area. This will give SAA more time.

Looks like Murder Inc is well along goosestepping its way to having all its teeth kicked down its throat.. Now swallow!

The Syrian army goose steps and so does China and Iran. Good guys goose step. The American do funny high lifting of foot march. Murder inc marches against the goosestep always. http://www.dailystormer.com/

These are hostile, foreign invaders and should be PUNISHED for doing so!!!

because of syria war i started to read history books, interesting stuff

Good move. Remember, ignorance is by choice. Considering the amount of conflict, death , destruction, human misery on a daily basis in this world, it is important for people to be informed so they can form their own views and not be apathetic or have to be told what to think. Study the major wars of the 20th century like World Wars I and II, the Korean War, Vietnam War, the Persian Gulf Wars, Iran-Iraq War, etc. to get a better understanding of today’s world and how it came to be. Also becoming familiar with the enormous numbers and types of weapons is also very interesting. Greetings from 3rd World New York City.

Iran should start buildup of troops on the Syrian-Jordanian border in tit for tat multidimensional chess move lol. http://www.dailystormer.com/

The question is whether the Russians confront US brinkmanship. I hope they do because lots of Americans on You tube in body bags, is the only language the Washington barbarians understand.

Usa …war criminal…usa …war criminal and Terrorist no.1….along with france, germany, uk, qatar, saudi, turks…these are the terrorists states and need taking down and their proxy isis, al nusra, sham….ENEMIES of all Humanity

The western world and its zio criminal alliance is done for ….good riddance ….