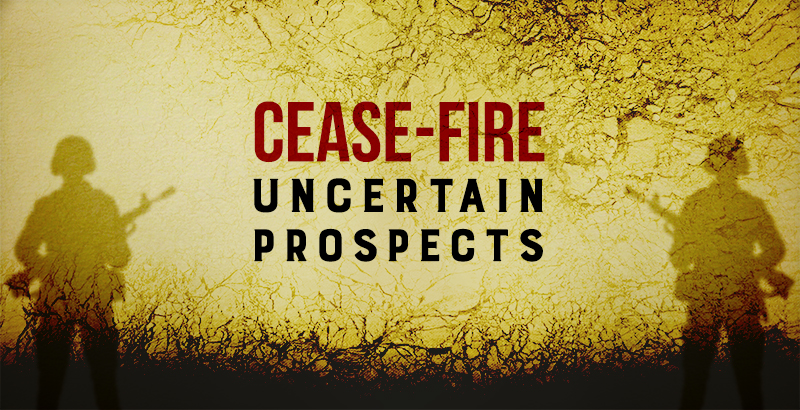 The Munich agreement of an imminent ceasefire in Syria could easily share the fate of the British-French-German agreement in the Bavarian capital in 1938, which failed to stop the outbreak of the Second World War.

Unlike the Sudeten crisis eight decades ago, global and regional actors in the current Syrian crisis do not have the task to prevent war, but to try to stop the conflict, which in five years took 260,000 lives and left 11 million homeless Syrians, but strongly confronted interests suggest that chances are at best half.

West demanded that ceasefire should begin immediately, while Russia insisted on March 1, to enable forces of Syrian President Bashar al-Assad to end the offensive and to take from the rebels second largest Syrian city of Aleppo, which would fortify not only its military but also negotiating position.

The compromised proposal determines silencing up the arms in a period of one week, but Secretary of State John Kerry, its Western and Arab allies and NATO Secretary General immediately after the deal have accused Russia of continuing operations of air support for Assad military advance despite the fact that the Munich document specifies that fight can continue only against members of the Islamic state, Nusra Front close to Al Qaeda or groups that the UN security Council designates as terrorist.

“There are no evidence of us bombing civilians, although they blame us for that”, replies the Russian Prime Minister Dmitry Medvedev on accusations made by the president of the French government Manuel Valls. “Russia is not trying to accomplish some secret goals in Syria.”

Public definition of these objectives is fight against Islamist militants who threaten Russia, the background objective is no doubt the defense of Assad, which allowed Moscow to have big air base and naval installations on the Mediterranean coast of Syria.

Munich Document will have difficulty to reconcile the Russian position with one of the US because Washington, beside intentions to destroy the Islamic state, does not hide that he expected that in the future the Syrian government is not pro-Russian.

Substantial differences get a form of charges exchange in public around the type of bombs used by the Russians, about the shooting of “legitimate insurgent targets” and civilians, “open military aggression” and provoking refugee crisis. There are even Turkish accusations that the Russians carry out ethnic cleansing in the north of Syria.
The situation is further complicated by the fact that at the Munich document does not have signature of government in Damascus and the main rebel group, which was brought together by Saudi Arabia.

The events on and around the battlefield also do not open virtually no space for optimism: Assad says he has no intention to cease offensive at a time when his troops are rapidly advancing on Aleppo whose liberation from the rebels could represent a turning point in the war.

Saudi Arabia and the United Arab Emirates confirmed that they are ready to send troops to Syria to fight against Islamic terrorists. US agree. US Secretary of Defense urged the two Gulf countries to send commandos to help capture the northern city of Raqqa (Al-Raqqah), the unofficial headquarters of the Islamic caliphate in Syria.

Assad is confident that Saudi Arabia and Turkey, two countries that almost obsessively want to see him go, plan to invade Syria. Assuming that it is unrealistic to expect that the Saudis can resist challenge of helping in Assad’s overthrow and blocking Iranian influence – what is their long-established priority – Syrian president wants to prevent them from doing that.

For the first time since 2014, the regime’s army prepares advance towards Raqqa, and a new offensive, after one near Aleppo, would completely cut off the rebel supply channels from Turkey.

Forces of Syrian regime, with support of Russians, Iranians and Lebanese Hezbollah, show no intention to give up the opportunity to realize goal stated by Assad, i.e. regain control over the whole of Syria. Ceasefire is not convenient for Damascus. All the more so because the insurgents got a certain amount of modern weapons including missiles which have range up to 20 kilometers.

It’s getting clearer that the Americans and the coalition they put together, have not only failed to defeat the Islamic State but also failed to remove Assad from power, although they still describe him as “part of the problem and not the solution.” In contrast to Washington, Moscow has managed to take the initiative from the very beginning of its military involvement in late September, and turned the tide of war on the battlefield.

In such circumstances, the Americans have only one thing left, to send a message to Assad not to “deceive” himself that the conflict can be resolved militarily. It probably can’t be resolved that way, but the Russians are on their way to insure that their ally Assad will be accepted as a partner in future peace talks and political transition in Syria. Maybe not Assad personally but certainly his government, which guarantees that Moscow will not lose its only foothold in the Middle East.

Ever since August 2011 Americans openly demanded Assad to leave, but later they focused on the fight against the Islamic State – which created a hardly understandable and confusing mix of priorities.

The key problem of the American strategy is in the fact that Russia and Iran will not give up support for the Assad regime convinced that Obama will not approve the entry in a new Middle Eastern war and that he will not send troops to Syria.

The failures of US involvement in Syria – on the front towards the Islamists and towards Assad – as a result has strengthen the militant wing in Washington.

If the Munich Agreement and a new round of Geneva talks planned for 25 February fail, Obama would have to move to Plan B – intensification of military activities against the Islamic state and against Assad, a plan that would introduce new foreign troops on the Syrian battlefield carries immense risks.

you are so correct with this point, jewamericans are lazy, they hate anything that is better than them, and the world is getting pissed off on this israeli firsters

suck it up buttercup, ISIS is toast in Syria.. or would you actually prefer a world war instead of a withering defeat OF YOUR PROXY ARMY??