An unidentified aircraft crashed in the southern countryside of the province of al-Hasakah in northeastern Syria on July 17, local sources and Syrian media reported.

The incident allegedly took place soouth of the town of al-Shaddadi, in the area close to a frontline between US-backed Syrian Democratic Forces (SDF) and ISIS. Al-Shaddadi as well as a major part of the province of al-Hasakah are controlled by the SDF.

Local sources already speculated that the crashed aircraft was belonging to the US-led coalition. However, the situation remains unclear. …looks like the head of a rocket or some sort of pod.

:””I am going to talk to Putin about detaining the people in Russia.” said Bill Gates. He works with the white alien agenda where this craft may have originated from.

Better not to ask that question, you will be introduced to a whole new world of schizofrenia…

I love new information.you never can tell when some good info comes from strange sources.

Its the first thing I noticed about southfront with its excellent war reporting stuff I didnt get elsewhere.

So if you got something good let me know. Id actually like to know. But if its batshit crazy ill be able to tell.

Well, for some people there are many alien races around, it’s pretty much a religion, but since I don’t believe in such nonsense I never tried to learn more.

It is pretty much like believing Star Trek story is real…

That’s because you refuse to ‘klingon’ to dreams Daniel :)

Whole Middle East is bleeding due to US, UK and Israel to steal lands and petrol.

Both I think Paul.

When US, UK and Israel present in this world then aliens have no job to attack this world.

There is no such thing as an “unidentified aircraft” — especially one that has crashed. What they are probably (must clumsily) saying is unidentified pilot.

One nose-cone, one clump of wiring. Not much to go on I guess.

maybe it’s a lost Israeli skyhawk from a previous conflict :) 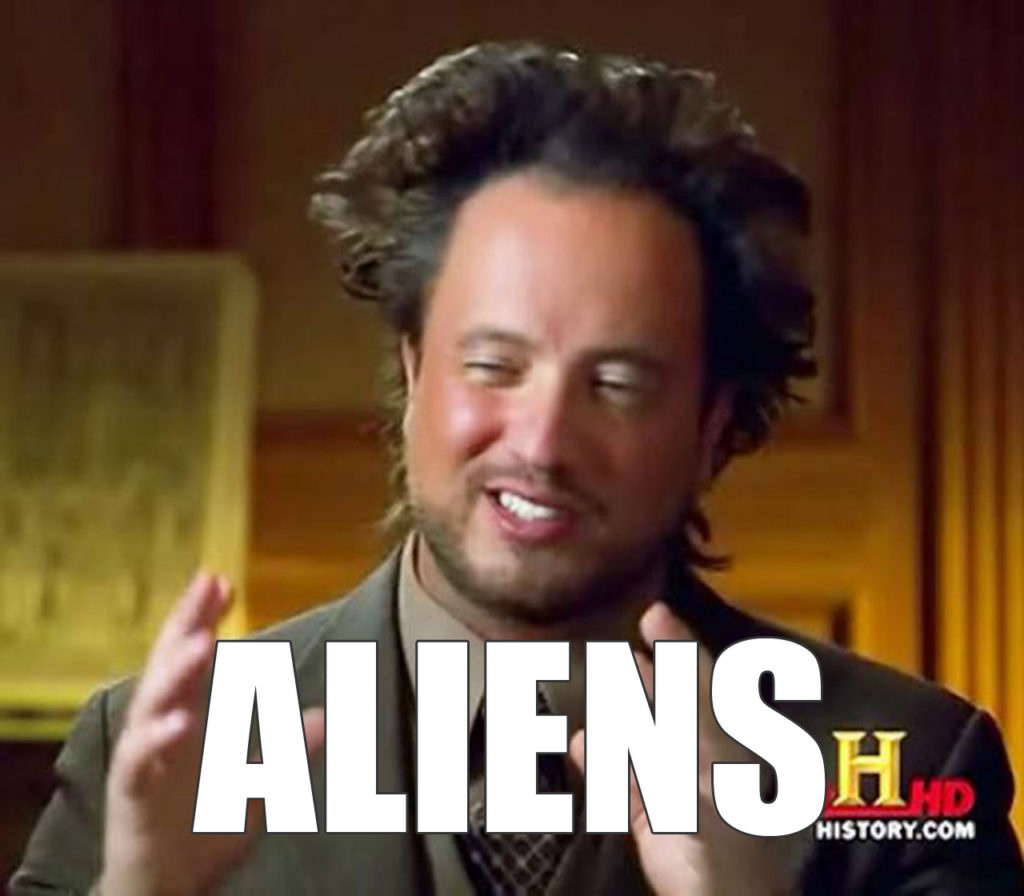 Just need to look for aircraft flying around missing a nose? :) 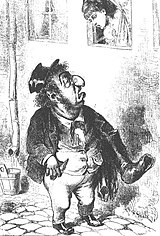 is not a plane, probably a drone or a missil dome

It is the outer shell of the incubation module used by the reptilian race when on long extended journeys from one dimension to ours to monitor our pathetic excuse for a ‘supposedly’ intelligent race. Or it’s like a couple of other commenters the cone of a missile or a pod maybe from a jet fighter?

Now you are funny!

She got wet just then.

the nose cone is most definitely from a F-16. The green paints would denote Israeli air force, all western users have grey liveries. Notice that most of the paint seems to have been scratched away.

I think the one responsible for the video know very well what it really is. By the way the green may also a primer.

i’m not sure either, but available info heavily points to an american made aircraft painted green and brown. It’s also very unlikely that it’s a missile radome as it has the mount for a pitot tube, which came off when it hit the ground. 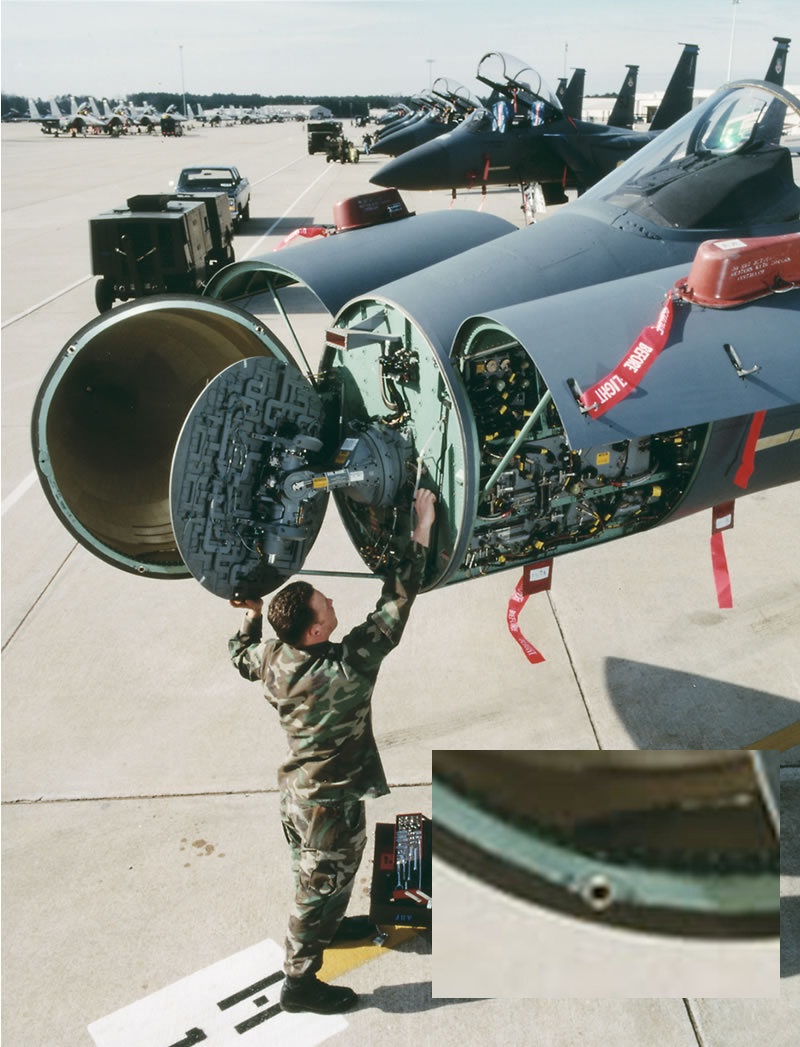 the pic shows the open radome of a US F-15 (couldn’t find a similarly positioned one for F-16). It can be seen that the configuration at the base it’s very similar, with an outer alloy ring and screws in the same position as the object in the video.

Good input sir thanks :). By color itself they’re already a good match.

The inside of the nose cone IS NOT painted brown. That is the raw color of the fiber it’s made from.

i was talking about the outside.

What does the colour of the nearby grass indicate John? :-)

idk. perhaps indicates that the wreck is actually located somewhere else, like in the vicinity of Daraa or generally in the Hama province

The vid seems to have been made to prevent geolocating the area, or at least cut for that reason.

@graemerymill:disqus
Weeds do indicate summertime.
This does not look like Khmeimim airbase based on photo taken. :D

it’s an obsession that user has developed during a discussion several months ago :D

It’s most definitely NOT a F-16 nose cone. It lacks the AOA air sensors, there’s no pitot tube projecting from the front of the cone, nor the characteristic “zippers” running down the top and sides of the cone. Also, the inside of F-16 nose cones is raw, not painted, and has a pretty big telescoping hinge on one side.

“It lacks the AOA air sensors”

On the F-16, They aren’t on the cone, but further back between the cone and the cockpit.

“nor the characteristic “zippers”

One of them is clearly visible in the vid, it’s burned and bent but it’s there.

there is the mounting. The pitot tube came off when it hit the ground.

“the inside of F-16 nose cones is raw, not painted”

depends on who built it and when. There are hundreds of airframes around from more than a dozen of variants.

“has a pretty big telescoping hinge on one side”

It could have came off, or stay hidden in the vid by the cone structure. The vid is clearly made to not show too many details.

A F-16 nose cone is most definitely the object that ‘s most similar to the one in the vid.

In any case, it is surely an american made nose-cone, see the F-15 radome pic above showing how they are built with an identical method.
In addition, the braided cables are distinctively of US origin

I only have been in on, and around 16s while repairing and dissassembling various blocks since for ever. THAT is not a F-16 nose cone.

And i am Lionel Messi lol.

“ALL F-16s have AOA probes on the nose cone”

Insist all you want, actually there is in the vid what appears to be the base of said sensor on a side (green rectangular shape near the base).

“And ALL varients have the “zippers” on the nose cone.”

2nd time. One zipper is clearly visible in the vid, although mangled and bent.

For colors, refer to user Graeme Rymill, he probably still gets some internet time in the psychiatric ward he types from.

20 + years of “F16 crew chief” and couldn’t come up with a better pic than those already found on google images.

I’m awaiting you log in with another users name and write something like “I think that decode got it right..”.

F-16s have been manufactured in a series of countries, and colors or a few centimeters difference mean nothing, especially with Israeli made planes, which have always been modified to different standards in respect to western ones.

The F-15 picture above also shows such similarity in the manifacturing process that leaves no doubt to the US provenience of the design.

Klingon Class B119 Shuttle Craft. I recognize the disruptor pods!

This may be remnants of a Klingon cloaking pod.
Why nobody has spotted it in 30 years. :)

Anti aircraft missile body. Nothing to see here, move along.

Who says the remains are recent? Frankly the whole thing is too mangled to make much out.

Much ado about nothing. Shitty wiring and a cone? So what? The shooters know what it is and are keeping quiet to save embarrassment of Zionatoyanquistan .

Israel? They will never admit it. As their frustration mounts, watch for more cruelty toward the people of Gaza.

Its shape is eerily similar to a white helmet.

Guaranteed the people who produce those can identify it with one casual glance and even smashed know exactly what it is!

Looks like an S-200 missile cone and wiring to me.
Probably one of the many S-200’s laying across Syria (as evidence of failure) that were fired at F-16’s but never hit anything other then the ground.
People pry just discovered it, pry been laying their since Israels last successful areal invasion of Syria.

this cone isn’t round, it has a flattened form, proven by the design of the alloy tapering on the base, made in segment to allow a non-circular design (opposed to the above F-15 pic where the alloy ring is a circular piece).

The braided cables are also much newer than S-200s, which is a 60ies design; they appear to be at least from the early 2000s.

I thought I heard a zionist talking. You seem to forget the IAF F-16 shot down by Syrian S-200s some months ago near Lebanese border.