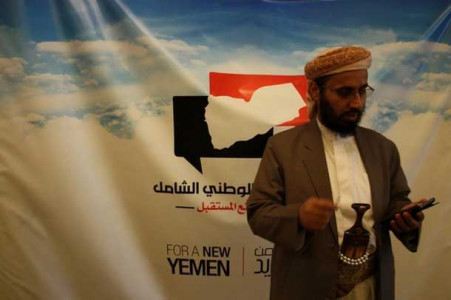 The absolute lack of principle and duplicity of international organizations working in the interests of the US, is well known. The latest example of this are the negotiation of the Yemeni crisis in Geneva, in which members of the clan Al Husi trying to negotiate with the fugitive President Hadi through mediators from the United Nations.

As one of the supporters of the “legitimate government” in Geneva observed a well-known Yemeni businessman Abdul Wahhab Al-Humaykani recognized by the US Treasury sponsor of international terrorist organizations and, above all, “al-Qaeda in the Arabian Peninsula”

n December 2013 the US Department of the Treasury included al-Humaykani in the list of “financiers of global terrorism.” According to US intelligence, under the guise of charity Humaykani funded ACAP and after the overthrow of President Saleh helped leaders of the “Al Qaeda” to gain a foothold in the central province of Yemen Al-Baida.

Now this “patron” is seen at the Geneva talks under the mediation of the UN and Ban Ki-moon himself does not disdain to shake his hand.