On Monday, October 28, a brilliant panel discussion revealing the atrocities resulting from the UN Security Council sanctions (in particular, Resolution 2397) forced upon the DPRK was held at 777 United Nations Plaza.  This panel discussion should have been held on the premises of the United Nations, in one of the conspicuous press briefing rooms, and announced by the secretariat, so that the numerous media outlets and resident correspondents  at UN Headquarters would have been alerted to it, and learned of the horrific consequences of UN policies causing deaths of innocent children, pregnant women, disabled and elderly.  To its credit, The Wall Street Journal, on October 31 published a small report, by Courtney McBride at the top if its “World Watch” column, page A9. 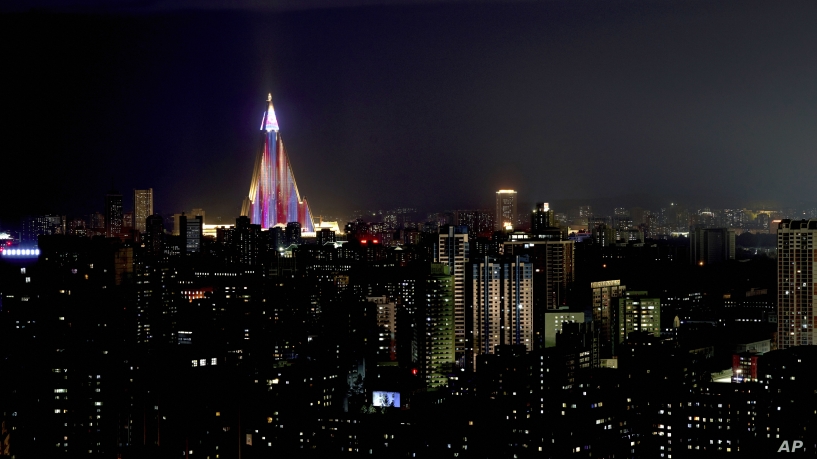 The Ryugyong Hotel is illuminated in the night sky in Pyongyang, North Korea, Sept. 6, 2018, days before the 70th anniversary of the founding of North Korea.

Instead, hidden away from United Nations headquarters, the panel discussion, led by Yifat Susskind, Executive Director of MADRE, introduced by Liz Bernstein, of the  Nobel Women’s Initiative, and featuring Dr. Kee B. Park, MD, MPH and lecturer on Global Health and Social Medicine, and Director, Korea Policy Project at Harvard Medical School,  Ms Joy E. Yoon, Special Educator and Educational Therapist at IGNIS Humanitarian Community, and Dr. Henri Feron, Senior Fellow and Legal expert at the Center for International Policy in Washington, D.C. presented a discussion so devastating in its documentation of the suffering of civilians of the DPRK as a consequence of Security Council sanctions that the facts virtually demand legal action against the UN Security Council to condemn and hold accountable the viciously irresponsible architects of the genocidal sanctions being inflicted on North Korea. As Legal scholar Dr. Feron emphasized, the Security Council is not above the law.

Reparation to the people of the DPRK must be mandated, and the members of the UN Security Council refusing to  abolish these criminal sanctions which violate the UN Charter, violate international laws prohibiting collective punishment, and violate every other legal instrument protecting human rights, should be charged with crimes against humanity, and subjected to the same Nuremberg Tribunal Laws that condemned as guilty those criminals who attempted to evade responsibility for their crimes by claiming they were only “obeying orders.”  Yes the governments wielding these sanctions are guilty beyond doubt, but the very diplomats obediently “following instructions” are no less guilty.

The audience on October 28, including various humanitarian aid organizations, representatives of the UN Security Council and various UN Missions listened, aghast, as Dr. Park described his effort to perform spinal surgery on a crippled North Korean patient: he was unable to begin the surgery making an incision with the scalpel available. The scalpel did not cut. Dr. Park examined the scalpel more closely and discovered that it was rusted. This was the beginning of the hour’s disclosures. Korea Peace Now’s publication entitled: “The Human Costs and Gendered Impact of Sanctions on North Korea” states, on page 9:

“It is particularly concerning that the list of banned humanitarian-sensitive items includes sterilizers, UV lamps for disinfection,ambulances, carriages and orthopaedic appliances for disabled persons, medical appliances such as ultrasound and cardiograph machines, syringes, needles, catheters, dental and ophthalmic equipment, artificial respiration machines, X-ray machines, medical furniture, microscopes, pumps, water heaters, machinery for filtering or purifying water, and machinery for water well drilling.”….”In an analysis of 25 exemption requests before the 1718 Committee, the UN Panel observed months of delays for cases such as water systems, ambulance vehicles, and medical equipment for maternal and neonatal emergencies.”

This is a miniscule example of a list so extensive it is annihilating the health of the North Koreans, and is extinguishing the hope of life for very many of the people of the DPRK.

The United Nations boasts, incessantly, about its Sustainable Development Goals, a boast which is ludicrous, and given the lie by the fact that the UN Security Council Sanctions are “impeding the economic development of North Korea. UN and unilateral sanctions have resulted in the collapse of the country’s trade and engagement with the rest of the world, thereby undermining and reversing the progress that North Korea had made in overcoming the economic crisis and famine of the 1990s.”

It has been known, now for more than four years that the so-called “unintended consequences” of Security Council sanctions against the DPRK are the agonized deaths by starvation of children and other groups of the most vulnerable, or deaths from preventable diseases, and the destruction of the infrastructure necessary to support human life in the DPRK. “Alarm” was expressed about this by Special Rapporteur Tomas Quintana several years ago. Numerous humanitarian organizations have been prevented by the sanctions from carrying out their work in the DPRK, and UN agencies responsible for helping the people of the DPRK are actually obstructed from their work by these criminal sanctions. Joy Yoon described being forced to wait three years for authorization to continue her humanitarian work in the DPRK.

It has been shown again and again that these so-called “unintended consequences” are being suffered again and again, and as the expert moderator of this panel, Ms. Susskind pointed out, when the policies causing these “unintended consequences” are repeated despite knowledge that these brutal consequences are inevitable, these consequences can no longer be characterized as “unintended.” Indeed, these policies, whose consequences are deadly, are genocidal in their intent. Just as knowledge of the nazi concentration camps was available to both the German people and the rest of the world, who looked the other way, so, now knowledge that the UN Security Council has turned the DPRK into a concentration camp dictated by the Gestapo of the UN Security Council can no longer be denied, nor diplomatically sanitized.

The Singapore Summit required reciprocal actions by the US and the DPRK.  The DPRK has required that these sanctions be removed. The United Nations has not removed one single murderous sanction, and now the DPRK has launched another missile.  They cannot be faulted for this. The US, together with  cowardly and obsequious UN Security Council complicity totally obliterated North Korea and much of South Korea between 1950-1953. This war has never officially ended. Though it is imperative that global nuclear disarmament immediately be enacted, in accordance with the recent treaty prohibiting the possession or use of nuclear weapons, as long as the US and the major, and indeed some smaller members of the UN Security Council refuse to abandon their own nuclear weapons, in violation of Article 6 of the NPT, flagrantly flaunting their double standards, the DPRK is morally and legally justified in protecting themselves from another holocaust, such as they suffered in 1950-1953. Further attempts to inflict Security Council sanctions upon that tragic and heroic country must be punished according to the Nuremberg Tribunal. The members of the Security Council cannot say they did not know of the consequences of their sanctions,  or do not know about these intentional “unintended consequences.” The world now knows. The UN Secretary-General must exercise the weight of his office and condemn these barbaric sanctions against the DPRK. Otherwise his office is impotent and useless. The Security Council, in betrayal of the intent of President Franklin Delano Roosevelt, has become one of the most dangerous instruments on the planet.

Carla Stea is Global Research’s correspondent at United Nations Headquarters, New York, N.Y. she is a Research Associate of the Centre for Research on Globalization (CRG)

Thanks for bringing this up.