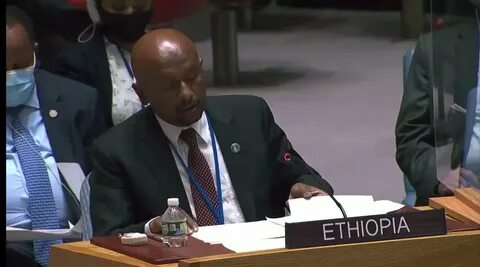 You can read the indepth overview on the Ethiopian’s issues, recently written by Daniel Edgar here:

While it may be too late to head off a looming showdown between the Federal government and a resurgent TDF and its newfound allies (the OLA and seven other opposition political and armed groups) determined to storm the capital city and overthrow the Federal government, Friday’s unanimous statement by the United Nations Security Council provides a small glimmer of hope that it may yet be possible to prevent a catastrophic confrontation which could plunge the country into disintegration with the prospect of many more years of armed conflict and mutual destruction between the respective regions and ethnic groups.

The joint statement released by the Security Council on Friday calls for an end to the ongoing armed conflict in Ethiopia, and for unhindered access for humanitarian aid to the most heavily affected areas.

The statement expresses “deep concern about the expansion and intensification of military clashes in northern Ethiopia” and the impact of the conflict on “the stability of the country and the wider region,” and calls on all parties to refrain “from inflammatory hate speech and incitement to violence and divisiveness.”

The resolution also calls on the belligerent parties “to put an end to hostilities and to negotiate a lasting cease-fire, and for the creation of conditions for the start of an inclusive Ethiopian national dialogue to resolve the crisis and create the foundation for peace and stability throughout the country…”

The statement was approved by all 15 Security Council members one day after the first anniversary of the outbreak of hostilities in the northern Tigray region. It was only the council’s second official statement on the conflict throughout this period, as disagreements between its members had previously prevented the elaboration of a unified position. Further discussions are scheduled to be held next week.

Ireland’s Ambassador to the UN Geraldine Byrne Nason, later stated: “Today the Security Council breaks six months of silence and speaks again with one united voice on the deeply concerning situation in Ethiopia. For the first time, the Council clearly calls for a cessation of hostilities. We believe this should happen immediately, and that all civilians must be protected.”

The statement was drafted by Ireland, Kenya, Niger, Tunisia and St. Vincent and The Grenadines. They also called for an open Security Council meeting to be held on the situation in Ethiopia on Friday afternoon, but it has been postponed until early next week. Diplomats said African Union representatives weren’t available to participate so the meeting was delayed.

The armed conflict has killed many thousands of people and has resulted in the forced displacement of over 2 million others. UN Secretary-General Antonio Guterres said last month that at least 5.2 million people in the region need humanitarian assistance including at least 400,000 “living in famine-like conditions.”

The press statement also reiterated the Security Council’s support for the African Union’s role in resolving the conflict and gave strong support to the “strategy and efforts to achieve a cease-fire and a prompt and peaceful resolution of the conflict” being undertaken by the AU’s high representative for the Horn of Africa region, former Nigerian president Olusegun Obasanjo.

While the development is to be welcomed, unless the ‘international community’ is prepared to offer substantial and decisive assistance to de-escalate the situation and initiate the long and difficult process of stabilization, confidence building and reconstruction the resolution is unlikely to have any effect on the course of the conflict.

Specifically, if the TDF is to call off its military offensive on the nation’s capital city at a time when all indications are that it currently enjoys a substantial if not overwhelming military advantage which a ceasefire would jeopardize by giving the Federal government and military forces an opportunity to rearm and regroup, the TDF would require a major incentive to agree to call off the offensive. The Federal government enjoys largely unrestricted access to international markets to obtain weapons and other essential supplies, something which the TDF does not have.

There is probably only one thing that might induce the TDF to agree to a ceasefire at this stage – if the international community could get the political and military leaders of the Federal government, Amhara Regional State and Eritrea to withdraw all of their military forces from Tigray Regional State. Moreover, to be effective this would probably require the commitment of a substantial international peacekeeping force to separate the warring sides and guarantee the safety of civilians.

Such an offer and commitment to the peace process by the international community could be difficult for the TDF leadership to refuse, as notwithstanding their presently dominant position on the battlefield with respect to the Federal government a final victory is still far from certain, and even if they could defeat the Federal government and take over the capital city this would not be the end of the armed conflict nor would it guarantee the liberation of Tigray, substantial parts of which remain under occupation by Amhara and Eritrean military forces.

Why are Hindus obsessed with SF?

Can SF fix their Comments and stop the spam????

Ivan Freely
Reply to  Why are Hindus obsessed with SF?

I’m sure when the dust clears, the usual terrorist lusting for blood hands will be seen again…. Isrealhell and its war dog, USA

There was a time in mankind’s history where there was no “international community” interfering in people’s affairs. Fuck the UN, and fuck the peacemongers.

Nothing wrong with those looking for peace BUT I agree on your sentiment on the UN.

True and if everyone minded their own business then there won’t be any conflicts.