The UN press release said a girl and a boy aged seven and nine were allegedly abused by French troops in exchange for a bottle of water and a sachet of cookies. 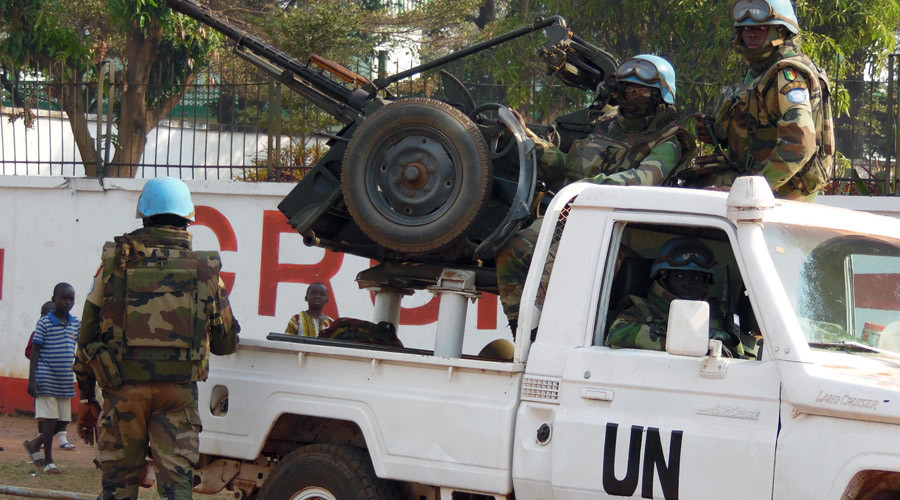 U.N. peacekeepers take a break as they patrol along a street during the presidential election in Bangui, the capital of Central African Republic, December 30, 2015. © Media Coulibaly / Reuters

On January 30, senior UN officials disclosed names of the countries whose peacekeepers are accused of sexually abusing and exploiting children aged from 7 to 16 in the war-torn Central African Republic.

The UN human rights staff in the Central African Republic (CAR) interviewed several girls who said they were raped, abused or paid for sex by United Nations and EU peacekeepers since 2014.

According to the UN press release a girl and a boy aged seven and nine were allegedly abused by French troops in exchange for a bottle of water and a sachet of cookies while the troops were taking part in Operation Sangaris.

The report shows that four other girls, aged 14 and 16 said their abusers belonged to the peacekeeping force operating as part of the European Union operation EUFOR CAR. The press release also said that two of the girls interviewed said they were raped, while the other two said they were paid to have sexual relationships with other EUFOR troops, believing the soldiers were members of the Georgian contingent.

Muslim rebels seized power in the predominantly Christian CAR in 2013, stirring up religious violence that has killed thousands. Later, France sent troops and launched Operation Sangaris, the 7th French military intervention in the country. European Union troops were there from April 2014 to March 2015.

“I think it’s hard to imagine the outrage that the people working for the United Nations and for the causes of peace and security feel when these kinds of allegations come to light. Particularly involving minors, it’s so hard to understand,” Anthony Banbury, the UN Assistant Secretary-General for Field Support, told journalists on Friday.

The UN launched a probe into allegations of sexual abuse in CAR previously, announcing it has contacted the troop contributing countries’ authorities urging them to conduct their national investigations into the new abuse cases.

Violations of Human Rights such as sexual abuse of children using food and water is as heinous a crime as genocide. Such soldiers and their commanders must be charged, ajiled or executed if they did so while in uniform.

Check out the genealogy of the men doing the raping and you will understand; A lot of this international Peacekeepers stuff is a bunch of privileged university aged boys and girls getting a free ride to see the world. The education and aspirations of these Peacekeepers will tell you a lot about their genealogy, i.e., only specific and well heeled types get to do this stuff.

Swiss police framed me for murder, tortured and sexually abused me to confess. Read my true story here http://www.actionsuisse.com/story and remember this rape is happening everywhere. No lawyer would take my case I had to go to Amnesty International in a country like Switzerland that ia beyond shocking.

African`s just don`t get it.Whites only their to still murder all the Black so they can take the land.As if the first Raid and murdering the stealing everything their coming back to steal what all they from the first attack and murder.As you all see their offspring is NO different.

Ugh. You knuckle dragger must speak English. Ugh!! News flash for the stupid Eugeney weenie -African culture is NOT the thug life , teeth grills and Ebonics. A real African would puke at the site of someone like you who has hijacked the word ‘African’ to hyphenate the word American — your actions dishonor Africans as you try to get a free ride and profit off those who actually endured the suffering and hardship of slavery. You are despicable -you spit on their graves. Shameful

lol,you can work your beek or muzzle a trained Sasquatch,lol cool.

I am throwing Eugenie the weenie back into the dullard pond he came from. He’s unworthy of my time. I received 5 replies this am from 7 month old posts and 1 Reply from a 1 yr old post from another troll on another site. Clearly it’s a setup and a troll invasion They also replied to others on those sites – that’s the thing with trolls, they aren’t very bright and I have lost my tolerance for cretins that clearly can’t read or write English and have no connection with reality whatsoever . Btw Good morning Paul :-)

Mornin Sis. I imagine he could write in perfect English if it was advantageous to his self-interest. It is obvious that the opposite is a functional schtick for him. “You cannot defend because….Ebonics!”

I endorse everything you said to the slime-maggot. “Yup” is just the short-hand. Until we stand up to these self-promoting grievance manufactures, they will play havoc with our society unopposed through the fear of being perceived to be a raycyst meanie. I don’t think I have ever seen you lacking in courage or conviction.

I was a raycyst meanie and an islamiphobe before it was cool. LOL. I am quite sure what we are hearing is the death rattle of political correctness – an ugly yet at the same time beautiful sound

You definitely have a flair for it. Hat-tip and professional courtesy (otherwise known as “props”) Keep rattlin those bones.

My mother went to Europe with a teacher’s group in the 70’s. There were African teachers there from different nations.

In discussions, they would ask my mother if the black American teachers were on drugs or if they were crazy, due to their actions and they way that they spoke. It was a time of “black power and dashikis.” Mean while, the African delegations were dressed in nice suits or business dress, like everyone else.

Cry all you want thief.