The UN Human Rights Council has replaced the text of the resolution, calling for an independent investigation into human rights violations during the Yemeni war, on a weakened “reasonable compromise” version. 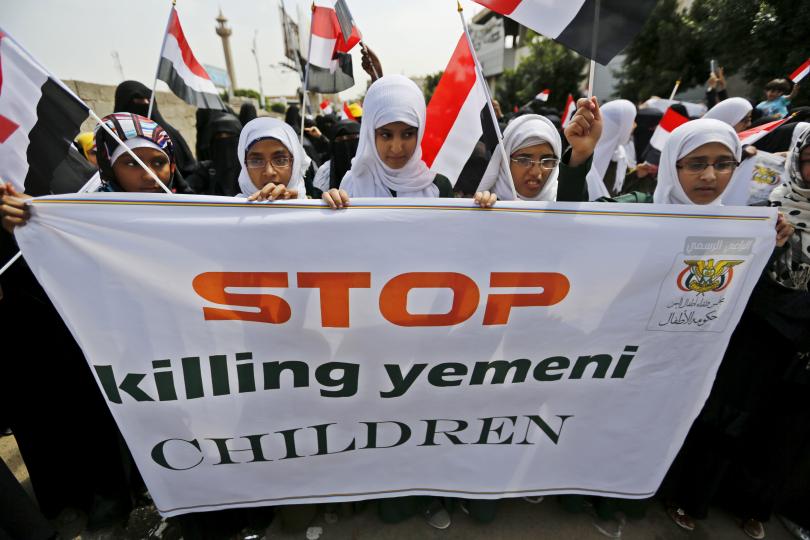 Girls demonstrate against the Saudi-led coalition outside the offices of the UN in Yemen’s capital Sanaa on August 11, 2015 (Photo: Reuters / Khaled Abdullah)

On Tuesday, a resolution, submitted by Slovenia and backed by 21 other EU states, calling for an independent investigation into human rights violations during the Yemeni war, has been withdrawn at the UN Human Rights Council. Instead of this, a weakened “reasonable compromise” text has been adopted.

An “independent” international investigation “to monitor and report on the situation of human rights in Yemen, on violations and abuses thereof since September 2014” had been requested by EU members. However, it failed at the Office of the High Commissioner for Human Rights (OHCHR). Instead of this, an updated and far milder “compromise” version of the resolution, drawn up by Sudan on behalf of African Group, was adopted without a vote.

The new resolution calls for the allocation of “additional international human rights experts to its Yemen program in coordination with the Government of Yemen” and the assurance that “the National Commission investigates allegations of violation and abuse committed by all parties to the conflict.”

According to the text of the resolution, an oral report on the situation in Yemen should be also prepared by UN High Commissioner for Human Rights, Zeid Ra’ad Al Hussein, who has long been calling for an independent inquiry.

The resolution was welcomed by some, including John Fisher of Human Rights Watch in Geneva, who called it as a “step in the right direction,” and Slovenia’s representative to the UN Vojislav Suc, who said that the text is a “good and reasonable compromise.” The Save the Children group noted that “they [experts] need to establish all the facts around reported violations of international human rights and humanitarian law, which are destroying the lives of Yemeni children and their families.”

At the same time, the Yemeni National Commission has been described as one-sided and lacking impartiality by other rights groups such as Amnesty International. The compromise was called a “shameful” deal, designed to please Saudi Arabia.

This is not the first decision of the UN that is ‘beneficial’ for Saudi Arabia. In June, the UN removed the country from the blacklist of states, violating children’s rights in armed conflicts. Later, UN Secretary-General Ban Ki-moon admitted that a number of countries threatened him, as well as his decision was made under pressure.

the saudis can kill women and children thats o.k, if syria or russia kill them thats just nasty and mean, got to hand it to the camel f$ckers their military aint worth sh$t however they seem to have a lot of political clout

and wasn’t it muricans who installed saudis in that same Council? It appears this was all planned years before the Saudi aggression on Yemen even started.