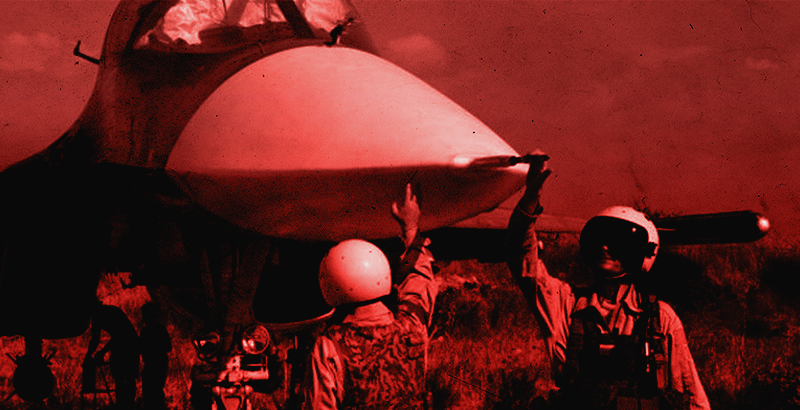 Today, a broad discussion on the reasons of Putin’s decision on the withdrawal of most Russian forces from Syria was launched. Apparently, the basis is a diplomatic framework. Russia demonstrates its commitment to a peaceful settlement, and sends a signal to the opposition. However, as often happens, there are ulterior motives of the Russian aircraft reduction in Syria.

In the last month when the intensity of the clashes in Syria decreased due to the ceasefire, a major part of the Russian warplanes located at the Khmeimim airbase were inactive (more than 50%).

During the active phase of the operation sortie’s rate of the Russian aircraft in Syria (without helicopters) were about 2,8-3 sorties per 1 warplane in average, counting all Russian warplanes located in Syria.

U.S. Air Force officer (fighter pilot) estimated the sortie generation rate of Russian warplanes as 2-4 sorties per warplane:  “With thirty-two on the ramp, I think they’ll probably be able to fly twenty-four jets per day. Depending on the sortie duration and whether they’re flying at night, they may get between two and four sorties per jet, per day. So I think the range is probably between forty-eight and ninety-six sorties per day.”

Indeed, the sortie generation rate was about 4-5 sorties per 1 combat-ready warplane at the active phase of the operation. The Russian Aeropsace Forces were conducting the most intense air raids while the Russian air grouping in Syria consisted of 32 warplanes. Later, it was increased to 40 warplanes. No aircraft has crashed due to a technical fault during the entire operation.

Meanwhile, the Khmeimim airbase’s facilities allow only a partial aircraft maintenance. An integrated servicing and maintenance could be done at the special air repair yards in Russia.

One way or another, Putin’s decision to withdraw Russian forces from Syria on Mar.14 was synchronized with a common need of the maintenance and integrated servicing.

According to the media reports citing “anonymous sources”, the patrial withdrawal of the Russian air grouping from Syria will be finished till the end of the week.

It’s expected that at least 12 Russian warplanes will remain in the Khmeimim airbase in Syria for everyday strikes against terrorists. These aircraft arrived to Syria about month or two ago and have been less involved in the operation.

The air defense systems including S-400 anti-aircraft missiles remain at the air base. The Russian naval grouping is continuing to guard the Syrian shore.

The Russian Aerospace Forces is ready to redeploy a full scale air grouping in Syria immediately in case of the war resumption by the opposition.

You’re thinking military-military-military. Putin’s going after Merkel’s & Hollande’s weakness in Europe over the sanctions (Merkel just suffered a massive repudiation in a regional election)…suddenly Putin’s outtathere (Syria)? Gimmeabreak. He’s giving the Europeans an opportunity to “declare victory” (his withdrawal) and lift the sanctions, which are killing German & France biz. Better the devils you know (Merkel/Hollande) than some newbies. And he’s going to arm the Kurds thru Armenia, while letting them annex a “Novo-Kurdistan” from eastern Syria & N Iraq (where they’re the majority anyway). No one outfoxes Putin, at least none of the O’Bama nitwits now in charge. Tragic.

It’s been said often by military analysts and aviation experts, who find it easy to believe, that Russian warplanes are really rugged, built for sustained combat and can operate from dirty FOD strewn airfields(intakes are blocked and air is fed from the top during taxi), from anywhere with a suitable long enough strip. Conversely US aircraft are finicky, hydraulic leaky, give great performance like a Porsche but require more maintenance, downtime, and the greatest care to avoid foreign object debris.

One can also conclude the US was never really serious about defeating terrorists in Syria or Iraq they just wanted contain them long enough to oust Assad. Plan A failed.