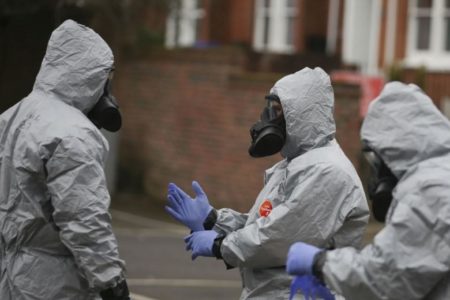 The deaths of tycoon Scot Young and Alexander Perepilichnyy, along at least 12 more may be re-examined by the Skripal case investigators, according to unnamed sources cited in British media.

Previously, officers said that there was no evidence that the deaths were suspicious, despite their family and friends insisting that they were murdered.

Alexander Perepelichny died under mysterious circumstances in 2012. A post-mortem examination determined that his stomach contained a poisonous plant Gelsemium. He ate a Russian sorrel soup and then vomited a “greeny-yellow” liquid.

The death of billionaire Scott Young was considered a suicide, after he fell out of the window of his apartment in central London. It was not considered suspicious at first, because Young had long been in difficult divorce proceedings, after which the court ordered him to pay 26.5 million pounds to his former spouse. He was allegedly a business partner of Boris Berezovsky. He was convicted in Russia of fraud and embezzlement, however the UK provided him with political asylum. Berezovsky was opposed to Russian President Vladimir Putin and later died in March 2013.

It is no surprise that UK media have found a connection, after all the Bond-movie villain Vladimir Putin appears to be removing all of his “enemies”, regardless of how negligible a threat they prove to be.

There is still no information “leaked” on who the 12 others whose deaths will be re-examined are, but they are likely to be just as arbitrarily connected to the alleged poisoning of Sergey and Yulia Skripal.

On November 30th, CNN cited two anonymous sources familiar with the Skripal investigation, who claimed that UK intelligence have concluded that “the brazenness of the attacks that killed one Briton and sickened a former Russian spy and his daughter — including the amount of nerve agent used — point to approval by Russian President Vladimir Putin himself.”

If one goes forward with all MSM speculations, he may conclude that Vladimir Putin disguised himself as one of the two Skripal case suspects and carried out the “operation” himself. he same may be applicable to all the other, in total, 14 cases that are to be re-opened, if rumors of the re-openings are true.

Regarding the anonymous claims, Russian Foreign Intelligence Service director Sergei Naryshkin said that the truth in the Skripal case can be found through a professional, joint investigation by both the Russia and UK. However, the British side has rejected all Russian offers to help and “keeps destroying evidence.”

“The Russian side, if you recall, immediately offered its readiness to participate and help in the investigation of this incident, this provocation. Unfortunately, the British side has not been forthcoming. Furthermore, the British side, as we see it, is constantly destroying evidence — [the Skripal’s] pets, other objects. The Skripals themselves have not appeared,” Naryshkin said, speaking to Russia’s Channel 1 on December 9th.

Furthermore, in late November, the Kremlin noted that the British side has shared no information regarding the Skripal investigation with Russia.

On December 10th, the Russian newspaper Izvestia posted an interview with Sergey Skripal’s niece – Victoria. According to her, that British intelligence services forcibly held her cousin Yulia and uncle in Porton Down chemical laboratory and did not allow them to return to Russia, essentially “abducting” them.

“Why are Russian diplomats and relatives not allowed to visit her, to speak on television?” Viktoria wondered, adding that she has not been able to contact her relatives since July 24. She claimed that the last time they spoke over the phone Yulia wanted to return to Russia.

According to Viktoria Skripal, her family could be used for political purposes – to artificially strain relations with Russia and impose new sanctions, and the poisoning itself was staged by Great Britain.

Furthermore, she claimed that Yulia would be a better “pawn” to do that, since Sergey is ambiguous, he is an ex-spy, while she is an “innocent young girl.”

Which, of course, would be absurd, the UK is simply protecting Sergey and Yulia Skripal from the “evil mastermind” Vladimir Putin. Luckily, the entire “Putin-orchestrated scheme” appears to be unravelling, with all of his victims and misdemeanors coming into the limelight. Or maybe that is simply part of his plan and the next phase of it will begin now, when the UK intelligence services have become complacent that the Russian side is so incompetent, that they cannot cover up one simple assassination.

May is in trouble with BREXIT, plus, when will Trump declassify the FISA warrents? So ‘Integrity Initiative NGO’ to the rescue, with more porkies, blaming Russia, for the work of UK intelligence outsrourcing.

The trust of the ‘populists’ will be broken for decades if the FISA warrants expose what we all suspect. Only a shooting war will be able to justify complete censorship and the shutdown of the internet.

BTW, where the f$$ck are Skripals now? Brits becoming less and less bright btw. Their spies now know that they may be used as “one way ticket|” by their Mi-6 curators and even their relatives are endengered.

The UK is using the ‘Chemical Weapons mantra ‘ to such an extent now that the ‘Casus Belli ‘ is being promoted in the media.

The FUKUS three are so immersed in their own fantasy bullshit that they have no fear of WW3.

The FUKUS three must be in more trouble than we all suspected. Is a huge financial crash imminent ?

What nobody seems to get, is the British Government is poisoning British citizens. The French would be storming the palace if Macron used nerve gas on the French people, the British don’t even notice.

” the British don’t even notice. ”

That’s because the nerve gas the British spooks used was not very good :)

Here’s another example of how the western media massages the truth. China just arrested an employee of George Soros, but the BBC Reuters etc refer to him as an ex diplomat?

Which employee of George Soros, where ?

Of course, 12 others die from mysterious circumstances, and none had dubious friends and business acquaintances, no criminal records, faithful wives and children not wanting to get their hands on parents money/loot. Serious.