A video, showing a dangerous maneuver, performed by a pilot of the Ukrainian Su-27 aircraft, has been published online. 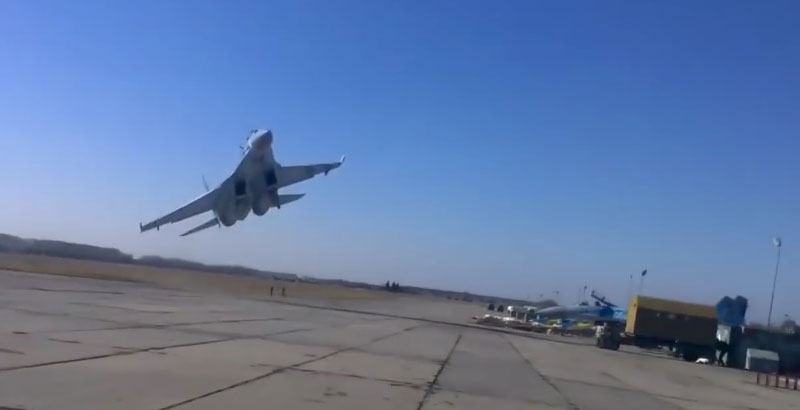 An amateur video, showing a dangerous maneuver, performed by a pilot of the Su-27 fighter jet of the Ukrainian Air Force, was published online. Place and time of the video’s filming are unknown. According to commentators of the video, it shows a military airfield near Mirgorod in Poltava region.

We can see egregious errors of the pilot, which miraculously did not lead to disaster. Did the fighter jets try to simultaneously come in to a landing strip? Or did they try to simultaneously pass over the landing strip at low altitude? At this time, an error (or errors) of pilots occurred, the jets began to twitch and sharply diverge in different directions in order to avoid a collision. The right aircraft carried out its maneuver under normal conditions, while the left one continued to make pilot’s errors. The pilot managed to retract a landing gear, but he could not take away an air-brake. Apparently, he totally was not ready for such a maneuver, which can be seen on evolutions of the aircraft. The jet barely kept in the air, while its engines spun up and produced thrust.

Ooooops. I thought they managed to right off there air force, back in 2014?