This artilce originally appeared at Krymedia 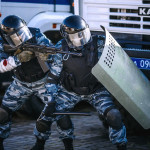 Crimea should be ready to respond rising terrorist activity of Ukrainian nationalist organizations, Secretary of the Security Council of the Russian Federation Nikolay Patrushev declared at visiting conference in Simferopol.

According to him, the matter of development of regional targeted programs for ensuring public safety and offense prevention requires additional study.

According to N. Patrushev, hardware-software complexes Safe City and all-Russian warning system in places of mass accumulation of people are slowly deployed in the Crimean federal district. In addition, the Security Council chief added it is necessary to complete creation of anti-terrorist commissions in municipalities.

“It is of prime importance amid rising threat of terrorist manifestations of Ukrainian fighters and nationalist organizations”, he emphasized.

The emergency response teams forming against war and terrorist attacks is underway in Crimea.