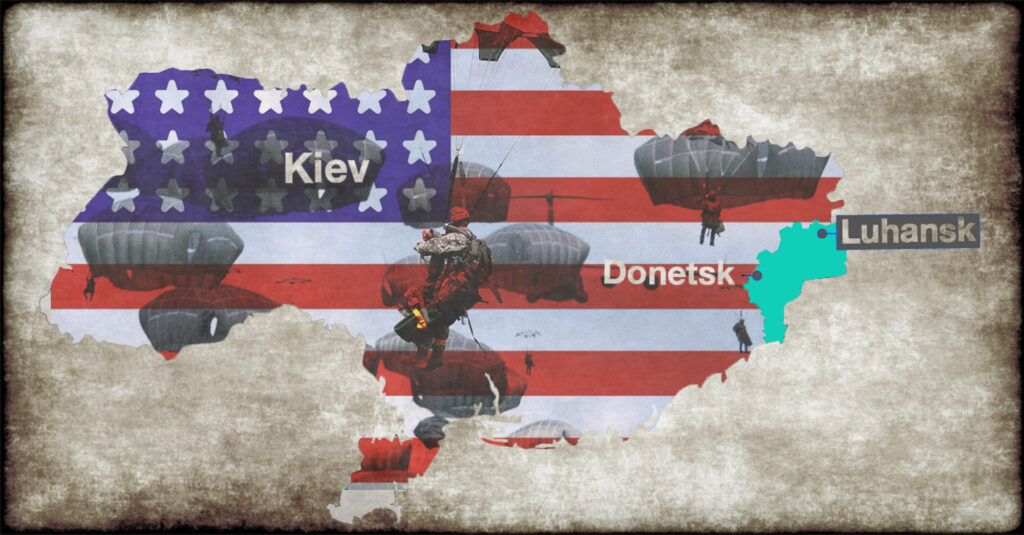 Monday, February 21, was marked by the further deterioration of the situation in the conflict zone in the east of Ukraine. Forces of the Kiev regime continue to attack civilian targets in the region of Donbass as well as try to sabotage evacuation of civilians organized by Russia.

In particular, a Ukrainian saboteur blew himself up while he was trying to plant an explosive device near the railway station in Donetsk, the People’s Militia of the Donetsk People’s Republic (DPR) reported. The incident took place at 4:00 AM local time and led to the death of the criminal.

Both DPR and LPR report regular violations of the ceasefire regime by Ukrainian forces that go amid the evacuation of the civilians.

Just recently, the area of guard post along the border between Russia and Ukraine was hit by a shell launched by Ukrainian forces.

The FSB’s press service announced that “on February 21, at 9:50 AM (local time), a shell of an unknown type, fired from Ukrainian territory, completely destroyed the place of work of guards from the border department of Russia’s Federal Security Service in the Rostov region.” The targeted area is located around 150 meters from the Russian-Ukrainian border. No casualties were caused.

As of now over 53,000 residents of Donbas have been evacuated to Russia according to Russia’s Emergencies Ministry Alexander Chupriyan.

Ukrainian trolls try to pretend to be Russian residents and work to imitate the supposed ‘negative stance of Russian citizens’ towards people evacuated from the conflict zone. This attack is just another demonstration of the top-notch ‘democratic values’ established in Ukraine.

The tensions in Donbas and aggressive actions of the Kiev regime force Russia to conduct more and more actions to prevent the humanitarian catastrophe and prevent the genocide of local population in Donbas.

It was reported that on February 21, President Vladimir Putin will hold an extraordinary meeting of the country’s Security Council.

“Putin will convene a meeting of the Russian Security Council. It’s a big Security Council,” press secretary Dmitry Peskov said, adding that the President will make an address, and others attending will also make speeches.

Meanwhile, representatives of the so-called ‘Western democracies’ continue to ignore the real situation in the region and make nothing to stop their Ukrainian puppets. Instead, they prefer to blame Russia for the escalation and threaten it with sanctions. It seems that in these conditions Moscow will be forced to undertake direct actions to put an end to the Kiev-instigated bloodshed in Ukraine.

Red Army was kicking Wermacht in th nuts since 1942. For Germans, worse possible punishment was Eastern front. Why don’t you enlist yourself to ukrops instead of making yourself an uberasshole?

Sure you trolls are out en masse. Sign of yankeestani beginning their propaganda campaign.

Hey look a ukro troll. Guess what naz1 lad. Its not only russians that hate you.

Everyone hates you, especially the americans. Your willing to die so anglos that hate you can steal your wealth culture and family?

You are mad. Thats why around the world, legions are ready to destroy you.

Novichok should be discarded, it was used many times and didn’t kill the targets, not even their cats, but bystanders, besides, it has the label in the bottle: Made in Russia.

trained by LGBT jens and CIA

Breaking news is of a incident on the Ukraine Russian border,five Ukrainian army dead and three veihicles destroyed,no further info,if they tried to enter Russia they have a death wish.

5 Azovisis dead. 2 APCs lost. No losses on the Russian side.

Any more detail or verified? wouldn’t surprise me if they were Azov SS tribute act,can’t wait to see the wrecked vehicles and whats left of the Azov morons,with any luck just the arm insignia which is the same as the 2nd SS Das Reich from the War.

Good riddance. 5more ukrobot Azovisis down. They tried to cross into Russia. They are still picking up their pieces…

Putin is not ubermensch. He lies to justify his exercise of brute force.