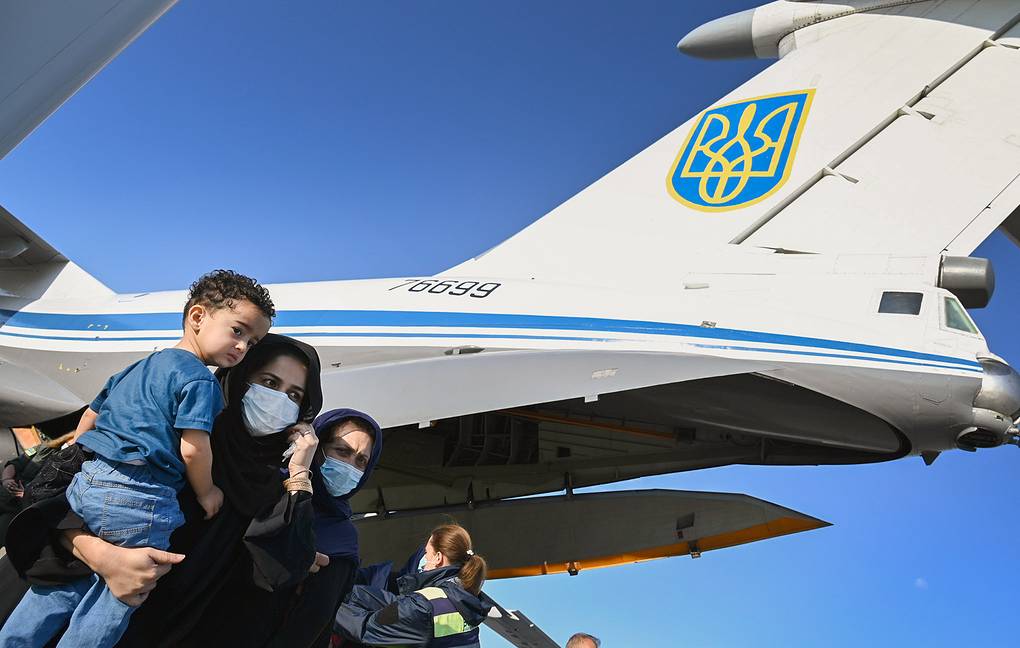 UPD: According to some reports, the Ukrainian aircraft was not kidnapped, but the Ukrainians decided to earn money instead of evacuating their citizens and organized a commercial flight for wealthy locals to Tehran. There were reportedly rich Hazara on board, who could pay for the evacuation.

The Ukrainian Defense Ministry is probably trying to present this situation as the hijacking by unknown armed people. However, there is a possibility that the military aircraft was simply rented by the Iranians for a great deal of money.

On August 22nd, a Ukrainian plane sent to evacuate citizens from from Afghanistan, following the Taliban’s control of key cities including the capital Kabul, was allegedly kidnapped and taken to Iran.

This was claimed by Deputy Minister of Foreign Affairs in Ukraine Yevgheniy Yenin.

Armed hijackers seized the plane on August 22nd and on August 24th, it flew to Iran with an unknown group on board, “instead of evacuating the Ukrainians,” Russian news agency reported according to the Ukrainian official.

“Last Sunday, our plane was hijacked by other people. On Tuesday, the plane was practically stolen from us, it flew into Iran with an unidentified group of passengers onboard instead of airlifting Ukrainians. Our next three evacuation attempts were also not successful because our people could not get into the airport,” Yenin said.

According to him, the hijackers were armed.

However, the deputy minister did not report anything about what happened to the plane or whether Kiev would seek to get it back or how the Ukrainian citizens got back from Kabul, onboard of this “practically stolen” plane or another one sent by Kiev.

Yenin only underlined that the whole diplomatic service headed by Foreign Minister Dmitry Kuleba “had been working in the crash test mode” the whole week.

On August 22nd, a military transport plane with 83 people onboard, including 31 Ukrainians, arrived from Afghanistan to Kiev. The presidential office reported that 12 Ukrainian military personnel returned home, while foreign reporters and public figures who requested help were also evacuated. The office also added that around 100 Ukrainians are still expecting evacuating in Afghanistan.

After the administration of US President Joe Biden had announced the end of Washington’s 20-year-long military operation in Afghanistan and embarked on launching its troop pullout, the Taliban went on an offensive against Afghan government forces.

On August 15, Taliban fighters swept into Kabul without encountering any resistance, and gained full control over the Afghan capital within a few hours.

Afghanistan’s President Ashraf Ghani said he had stepped down to prevent any bloodshed and subsequently fled the country. Vice President Amrullah Saleh said that under the constitution, he would become “the caretaker president” in the absence of the president and called for armed resistance against the Taliban. At present, Western nations are evacuating their citizens and embassy staff.

Yes, why would iran want to hijack a ukrainian plane? I heard that an f-15 shot down an iranian drone in syria yesterday, if true, i hope iran is not scared and gives a response to that

If it is true. Think about it. An ukrainian plane and Ukraine is in the bed with the zios nowadays. And the zios are trying very hard to blame Iran for everything imaginable.

I think it was a “favor” that the ukrops made to the zios. After all they need zio weapons.

The same goes for the iranian drone. No one is talking about it, except a couple of zio-affiliated fake news producers ( faux news being to first one ). Also faux news has been in anti-Iran mode for the last two weeks at least, accusing Iran of everything imaginable.

So I call bullshit on this two stories.

Anything coming out of Ukrainian officials mouths nowadays is weird ans suspect. They are very desperate to get US and UE support and cash – and will do anything, no matter how self degrading or embarrassing, to try and get it.

Talibs have enough gear for the next 30years. Thanks USA…

Stick a penny in one and watch them tear it apart!

For sure,cia/lgbtq/soros partnered pongos must be raging in vain,then again they were just born for it:

But it is particularly when Taliban ok Iran to send limitless amounts of fossils,albeit reducing the cost of fuels to the peoples by a whopping 70%,goes to show how pathedic the us hegemon parasites tax used to be under usa rule,sadly the same apply to just about all the fools whom obideth their phaed res concept$,ultra parasites to the core,afghanistan will prove to the world they don’t need usa nor gimp:

I read this story originally on Avia.pro which is supposed to be a Russian website, but I have my doubts since they often throw a few “hit pieces” against Russia on nearly a daily basis. I should note more than a year ago I checked their site info and ahem ahem…their offices were on Spruce St. Boston, MA. Why I’ll be a monkey’s uncle!!!!!!.

When this first reported it seemed really weird. Because, that Ukrainian transport aircraft has been repeatedly seen on tarmac at Kabul airport for couple of months. It has appeared parked on tarmac in background of photos of airport for week after week, on Twitter and other sites, leading up to current chaotic situation at Kabul airport. The Ukrainian crew were likely part of a side-hustle/charter-business of some sort – would assume involving moving people and assets for cash (like the contents of Ghani’s palace to UAE?!). The ‘hijack’ story likely a knee jerk cover up story, to try and dodge accountability for what they have been doing with a state owned aircraft, and why they where landing where they were on that particular day.