The canonic Ukrainian Orthodox Church (Moscow Patriarchate) fights back the systematic religious discrimination that it has been facing since the 2014 coup. So far, the resistance of the Orthodox community has been mostly focused on the grassroots level. However, recently, the Church supporters also started making legal steps in regions. While it is highly unlikely that a major progress in the field can be achieved under the current Kiev regime, the ability of the canonic church to resist to aggressive actions against it demonstrates that it has a wide support among Ukrainian citizens despite the years of the propaganda and persecutions on religious, ethnic and political grounds.

Criminal proceedings have been opened against a Deputy of the Lvov Provincial Council at the request of the family of Fr. Maxim Yoenko, a cleric of the canonical Ukrainian Orthodox Church in Zolochev who has continually faced harassment from civil and schismatic representatives. 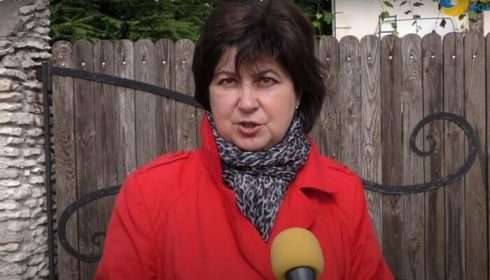 The Zolochev police launched a pre-trial investigation on September 3 into the statements and actions of Deputy Miroslava Babinskaya aimed at inciting religious hatred against representatives of the canonical UOC, the Union of Orthodox Journalists reports.

In July, she stated that all representatives of the UOC must be expelled from Zolochev, since they won’t leave themselves. “Our fight against the Moscow aggression in Zolochev continues, because the Moscow Patriarchate is the aggressor in our city,” Babinskaya told reporters, referring to the use of Fr. Maxim’s house as a church.

Babinskaya even proposed declaring the Moscow Patriarchate illegal in Zolochev at a recent City Council session. She earlier stated that she is certain that the UOC “glorifies Putin and blesses weapons, and kills our Ukrainian defenders.”

In a statement on the matter, Matushka Olga Shakhoval recalled the Deputy’s scandalous statements in the media in July, as a result of which Fr. Maxim and his family began to receive threats to both health and life, which continue to this day. She also pointed out that on July 6, activists destroyed the fence around their house.

Their house has also been graffitied with racist and nazi slogans, and Mayor Igor Grynkiv has also called on the people to rise up against Fr. Maxim and the church on his property. After the fence was rebuilt at Fr. Maxim’s house, the mayor’s office took to the courts to demand that it be demolished again, though this claim was not satisfied.

In August, unknown perpetrators attacked a children’s store in Zolochev belonging to a parishioner of the canonical Church.

Surveillance cameras have also been set up around Fr. Maxim’s house, and thus his entire family is always being watched. The Public Advocacy NGO has pointed to the surveillance as just one instance of the violation of human rights in Zolochev and has promised to bring the matter to the attention of international human rights organizations.

It was then reported that the issue of the violation of the human rights of the faithful of the UOC in Zolochev will be raised at a session of the UN’s Human Rights Council.

The war of the Catholic West against the Slavic nations [for the majority are Orthodox Christians] continues unabated, as Ken Leslie wrote yesterday on the Saker website, the Great Slavic Nation has been shattered and persecuted for centuries, and many states that have entered the Western orbit as servants fight their own Slavic brothers, for the sole gain of the Western elites, while the Slavic genocide, perhaps numerically the largest in history, is never mentioned and remains censored by all sources except a few Slavs who know and recognize their ancient roots.

SF editor has a very weird interests. War in Libya, War in Syria, then suddenly Ukraine internal religious issues:)))) Why would that be, hmmmm…….:)))))