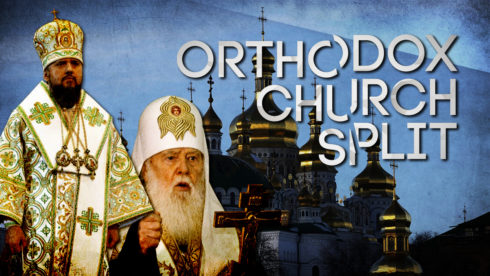 According to Zelensky, all Russian-linked institutions must be banned from Ukraine.

After years of illegal persecution, Ukrainian President Volodymyr Zelensky called on Kiev lawmakers to draft a law banning the Russian Orthodox Church from Ukrainian territory. The justification would be the “necessity” to ban institutions linked to Russia due to the current conflict. With this, once again the Ukrainian government shows that it does not prioritize popular interests, considering that Orthodoxy is the majority religion of the Ukrainian people.

The new Ukrainian measure comes amid the recent initiative to extinguish all Russian organizations active on Ukrainian territory. Previously, companies and associations linked to Russian citizens had already been outlawed. Now, the focus is on attacking religious institutions. In addition to calling on lawmakers to approve a law to prohibit the Moscow Patriarchate’s activities in Ukraine, Zelensky also signed a Decree ordering the Security Council to impose personal sanctions against representatives of Russian religious groups, which will target all the clergy of the Orthodox Church.

In his statement on the matter, Zelensky said that Kiev cannot allow Russia to “build an empire” and “weaken Ukraine from within”, nor to “manipulate” Ukrainian citizens in favor of the so-called “Russian aggression”. In other words, Zelensky asserts that he wants to end Russian-Ukrainian ties and prevent the continuity of cultural and religious heritage between the two countries.

Azov Nazis raided homes of local residents and burned icons in Shirokino in 2015: 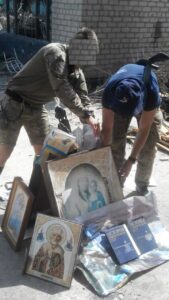 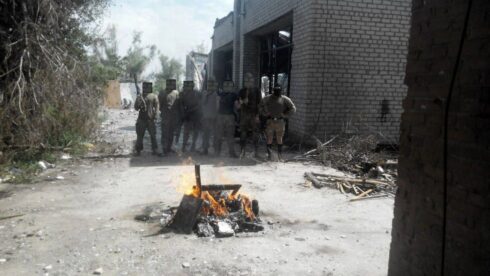 Zelensky’s argument is absolutely fallacious. In fact, the Ukrainian Orthodox Church is part of the Moscow Patriarchate, but this is a consequence of the historical formation of that region. Ukraine, Belarus and Russia were for centuries a single empire, not different states, with the fragmentation of the region being a post-Soviet political phenomenon. The distribution of the canonical territories of the Church does not necessarily follow the laws of the legal borders of the National States, since the borders are constantly changed as a result of political events, while in the Church the changes are not so frequent.

The Ukrainian Orthodox Church has always had broad administrative autonomy, and there has never been any kind of political imposition by the Moscow Patriarchate on the local faithful. There is no data to corroborate Zelensky’s claim that Russia is building an empire to “weaken Ukraine from within”, this rhetoric being just an attempt to disguise the indisputable fact that the Kiev regime is promoting religious persecution against the majority faith of its own people.

However, this is not really surprising. Since 2014, the Orthodox Church has been persecuted in Ukraine. The genocide in Donbass included since its beginning the massacre of Orthodox Christians linked to Russian traditions, as well as the bombing of churches, monasteries, and the assassination of clergymen in the Eastern oblasts. The situation worsened in 2019, when, after an anti-canonical maneuver financed by NATO, a Ukrainian ultranationalist schism that had been formed in the 1990s came to be “recognized” by the Patriarchate of Constantinople, and then the Kiev regime began a wave of support for this sect, considering it a kind of “Ukrainian national church” to the detriment of the real Orthodox Church – which is linked to Moscow.

Since then, the Ukrainian state has carried out various crimes against Orthodoxy, including using police force to illegally confiscate properties of the Moscow Patriarchate in Ukraine and give them to the schismatic nationalists. It is important to mention that the nationalist ideology of this schism is so strong that in religious rituals it is even common to venerate Ukrainian national leaders as Christian saints, including the Nazi agent Stepan Bandera – which is why this “church” receives wide support from the neo-Nazi regime and the West.

In this sense, what is happening now is not something actually “new”, but the formalization and officialization of a persecutory practice that was already becoming common in the recent years. At first, the Church was persecuted mainly in Donbass, illegally. Now, the State will be able to carry out operations against Orthodoxy throughout the entire national territory – and in full accordance with the legislation of the neo-Nazi government.

This is just one more step in the project of anti-Russian cultural genocide. After banning literature, music and language, now they ban religion. In fact, Ukraine’s de-russification campaign can only be stopped with the success of Moscow’s special military operation. Kiev is determined to serve the Western interest in removing any ties between Russia and Ukraine, even if this is not in the benefit of the local people, considering that even among ethnic Ukrainians the Orthodox Church is the majority religion. Kiev’s plan is to replace the legitimate, traditional Orthodox Church followed by the majority with the Western-backed ultranationalist schismatic sect.

They are after money…

Also, they were attacking Russian Orthodox church for a long time, Alex Christoforou did a video about it as well.

A war without a religious war is not a real war.

WWI, WWII, Vietnam war, etc etc? Those weren’t real wars? Damn – you are really into religion buddy (good for you I guess). But most of the wars starts because of greed and power.

Greed, 9/10/2001 – Pentagon was missing $2.3 TRILLION – 9/11/2001 Pentagon accounting rooms that were looking into the books was hit by a fuking plane. Al-Qaeda did it??? Okay. The Taliban said give us proofs that Osama Bin Landen did it and we hand him over to you guys… The US invades Afghanistan.

Iraq has WMDs?? Oh they never had so let’s change the story that Saddam was linked to Al-Qaeda… Oh he wasn’t… He gassed Kurdish people…Oh the US and Germany sold them to Saddam…

The West wars against the Middle East was and still is because of oil and gas pipelines (mainly). The US was very unhappy about Nord-stream 1 and told the EU they “should” ONLY buy “freedom LNG” from NA (from day one). Oh boy Russia just destroy their own gas pipeline.

Right after that the US told the EU to stop buying cheap Russian gas and buy gas from NA and they were really happy to make a new pipeline to the EU.

Don’t be fooled, people love to blame anything they do on something. At the end of the day humans are the problems – you are just blaming it on something else that HUMANS are doing (which you dislike).

EXPECT MORE AND MORE BARBARISM FROM A JEWISH NAZI REGIME./ HOW JEWISH LEADESRHIP BEHAVES TOWARDS CHURCHES AND MOSQUES IN OCCUPIED PALESTINE?

To destroy the orthodox church in the name of the vaticans is the entire purpose why the “greek katholics” in galicia and romania were created.

Good and right statement. For those who have something in theirs upper level.

In the russian terrorist wasteland churches are where the criminals gather . The populace is being played everywhere in the shitthole.

Russia must restore order to the degenerate Ukraine

If Trudeau would go to lead Ukraine with zelensky that would be even more destructive than Russian weapons. Just look at how he’s ruined Canada.

No secret Pope wants to merge Orthodox with Roman Catholic and would be considered a step toward a universal global religion desired by the West.

The pagan Catholics do not intend for this merger to be equal.

More proof that this regime is satanic. Born of the beast, the power comes from the Red Dragon.

The Ukies are barbarians. Their culture is simply gangster. This move will bite Zelensky in the ass. Soon enough the Ukrainians will hang him themselves.

Anything from or about the shitthole russia terrorist wasteland needs to go right back to the dump.

lol canada is not even a real country, just a stupid banana republic colony of some british feudals in london

The talmudian devil worshiper khazar fajoos STEP towards destroying the Russian orthodoxy. Catholicism is already prisoner of the global satan cabal for a long time now. The only remaining problem is the orthodox russian orthodoxy.They can’t be ‘modernized’ with LGBTQ++++, a vital process to enslave all world.

Keep in mind that Ukrainian regime is led by international Jews (not only Zelensky) to create a second Israel. How many Ukrainians are to criticize Ulrainian government without going to jail. Not even Christian Klitschko dares to criticize his government.

the Synagogue of Satan regime bans Christianity? can not believe it lol

Zbigniew Brzezinski wrote about this exact occurrence as a desirable goal of US strategy in the Ukraine.

The Klown of Kiev obeys his masters well.

For all Zelensky is a jew, no jew has dared to ban Christianity since Lenins time.

But clownyear 2022 Nazi jews ban christianity. And it’s defense was announced behind a bust of Lenin in the Donestsk Peoples Republic.

It’s a wild world out there.

Well that’s who he is Lenin 2.0 and just like Lenin his job is plain and simple get as many slavic people killed as possible while steeling as much money as possible.

This nasty little jew zelensky bans the Russian Orthodox Christian Church from Ukraine and these Ukrainian idiots burn Christian Bibles and artefacts for their Jewish master…….

Only a jew would make a law like this……

The entire Ukrainian war is a war against Orthodoxy. This is the land of Kievan Rus, if you want to strike at the heart of Orthodoxy, it’s right here.

Schismatic sect= Satanism. This is it. The Western elites are all satanists. They are against Christianity, Orthodoxy and Judaïsm. The Black Pope practices Satanism. The Vatican Pope is a front. The Satanists support paedophilia and the Rainbow club.