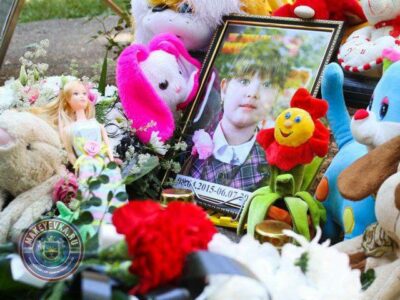 Maria was killed by the AFU on July 6

Over the past two days, 5 children have been killed by Ukrainian shelling in the Donbass. The Armed Forces of Ukraine are intentionally shelling residential areas. As a result, number of civilian casualties is growing every day. Residents of the Donetsk and Luhansk People’s Republics have been suffering from the terrorist war of the Kiev regime for eight years.

On July 6, the AFU shelled the residential quarter in the town of Makeevka with the Hurricane MLRS. As a result of the attack, three children and a man were killed. The victims are an 8-years-old girl, a 7-years old boy and a 17-years-old boy. 10 others civilians were injured, including 7 children.

The military experts of the JCCC of the DPR confirmed the shelling of the Central City district of Makeyevka with the use of BM-27 “Hurricane” MLRS with a 9M27K cluster warhead. The AFU fired at the densely populated area of Makeyevka from their positions located near the locality of Solovyovo.

The shelling was carried out by the 25th separate assault brigade of the AFU, commander – Colonel Kurash Evgeny Yuryevich; chief of artillery – Lieutenant Colonel of the Chapter Vladimir Viktorovich.

A criminal case has been launched, the criminals will face capital punishment when captured by Russian forces.

The eyewitnesses described the attack:

“After it calmed down a little bit, I went out on the balcony, looked: there were two children on the playground. A boy and a girl… The girl was still sitting, she was alive. She pulled the boy … Then, when I rushed out… the girl was already lying on the boy.”

Locals bring flowers and toys to pay tribute to the victims.

Another boy was injured as a result of the shelling in Donetsk. He risked to lose his arm but doctors managed to save it. 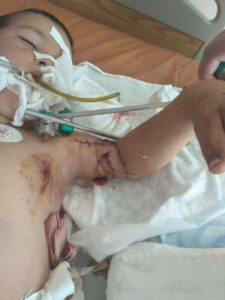 The Ukrainian military does not stop the terrorist attacks. Massive shelling continues.

On July 7, a Ukrainian shell killed a 30-year-old woman on Stakhanov Street in Donetsk. 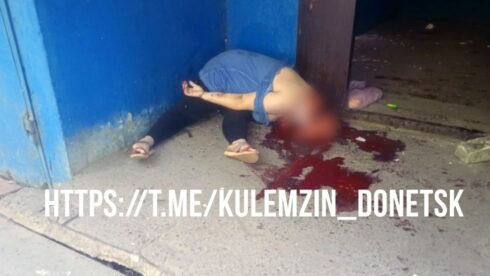 On July 7, as of 7 p.m. local time, Ukrainian forces have fired almost 300 large-caliber ammunition on the territory of the Republic, including BM-21 Grad MLRS, as well as 155, 152 and 122 mm artillery shells. As a result of the shelling, a woman was killed, 10 more people were injured, including a child.

During 141 days of escalation, 232 civilians were killed, including 16 children.

The criminals will face capital punishment – death is too good for them -locked room one cluster bomb thrown in .

Or tie them up and leave them to the families of their victims.

Destroying the bridges over the Dnieper and the rail lines and train yards in Western Ukraine would stop many of these terror attacks. The ruling class in Moscow needs to decide which civilians they are trying to protect. The people of Donbass or the Bandera of Western Ukraine.

the ruling class in russia are the same as anywhere in the west their only interest is themselves power hungry and greedy for more and more,let them choke on their money shove it down their throats

thank you vladimir .. too weak. too gay and too stupid to protect kids in Donezk!! we want Kadyrow, he would make it much better and much faster !!

We heard you. FSB.

These Nazis are US AND NATO TRAINED DEATH SQUADS. The Russians will hunt these dogs. The train to hell is running overtime for Ukrainian NAZIS.

Israel is much worse than Ukraine

when will Putin start with this very needed action?? and why did he wait sooooo long??

Time to die for these Ucrap Nazis!

russia can very easily deploy a few thousand additional soldiers with artillery only for the Donetsk area, after 4 months nothing has changed there and the last two weeks the city is massacred, the russians must push the front 40-50km from the city and as fast as possible, I have always supported russia but the situation in Donetsk makes absolutely no sense after 4 months and the last murderous weeks

All those rabid Ukrainian Nazi dogs, who are killing children in Donetsk, are hiding behind the same children where they are shelling Donetsk, so there is no point in giving them hell with artillery, we have to get to them…

Yes you are correct my friend. The artillery units firing into civilian areas targeted in Donetsk and across the LDPR hide in the middle of populated areas with large numbers of civilians used as shields. This in turn makes it difficult for the Russian and LDPR military units to respond appropriately . Without causing civilian casualties. This seems to be a tactic that the Kiev regime favour regardless of the cost in innocent lives. You are dealing with the most evil and inhuman creatures. Soulless and Without a spark of decency in them. To push the front line a further 50km or so may well be an option worth looking at. And I’m sure that as far as the Russian and LDPR leaderships are concerned this is a top priority. The train marshaling yards in West Ukraine is where a lot of these heavy armaments are arriving before being sent on to southern and Eastern Ukraine. Also something needs to be done about the military equipment arriving in Poland and Germany!

Without capital punishment, they did not deserve a quick death. Give them a lifetime of hard work – a coal mine, they’ll get a slice of bread for every ton of coal they dig up, and they’ll never come out of that mine, they’ll never see the sun again… and when he’s dead let him be buried by the same dogs as he was, if they are bothered by the stench of that dead dog!

Rest in Peace small angel. We will avenge those who killed you. You are in heaven now. They will soon be in hell.

On 5th July a 10 year old girl was killed as a result of shelling by the Ukrainian military in the LDPR. And again even after this tragedy these attacks continue. 5 young children killed a 7 year old and an 8 year old among them. The photos and videos speak for themselves. This is pure butchery.Those responsible the officers and senior NCOs on the ground using these weapons must know the results of their actions. We noticed also that the attacks are timed 5.20pm 6 and 7pm. When families are at home or sitting down for a meal together. These are not the actions of idiots. But calculated and deliberate. The photo also of an elderly lady above killed in these attacks these people are No threat to Nato or the Kiev regime yet they are singled out targeted and murdered without mercy. The silence from the Western politicians is deafening Nothing shame on you in Brussels and London Shame on you.

They must be very pride of that. I mean, to fire hundreds grenades to kill a child. What russian are waiting for to destroy Donetsk ukronazis?

If the front line isn’t moving forward for a while yet, why not evacuate all civilians and move them back to a safe distance? OK, it could seem like a defeatist move, and probably easier to say such grandiose things than do them, but the real victory is surviving (preferably uninjured) when the enemy doesn’t, and it would be temporary. Without civilians present could this result in more shelling? If it does then it will make it easier to locate the sources and destroy them. Perhaps there are reasons not to do this though, just an idea.

I bet my life that even if Russia captures those responsible they will not execute them.