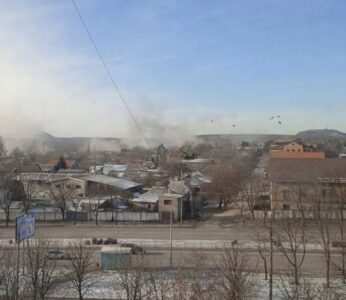 Ukrainian soldiers continue heavy shelling of residential areas in the city of Donetsk and settlements located nearby. Today, Ukrainian Nazis have already killed one civilian and wounded 10 others.

Donetsk is under artillery and rocket fire since midday. Ukrainian servicemen have already struck residential buildings in Kirov, Petrov, Kuibyshev, Lenin districts of the city with 155mm guns and MLRS. The Ukrainian Nazis fired 44 rockets from a multiple rocket launcher system at Donetsk in 10 minutes.

So far, the number of civilians injured as a result of the shelling has increased to ten people, according to the Headquarters of the Territorial Defense of the Donetsk People’s Republic.

The Ukrainian military continue terror against the civilian population of the DPR, heavily shelling residential areas and civilian infrastructure that are not military facilities.

According to the Representative Office of the DPR in the JCCC, the AFU fired 57 ammunition rounds from 155-caliber artillery and 152-mm mortars. Three settlements of the Republic came under fire.  As a result of the shelling, a civilian was killed and 3 others were injured; 6 houses were damaged.

Additional information about injured civilians and infrastructure damage is being clarified.

Ukranazis are being crushed, so they resort to these cowardly acts venting their anger and frustration on innocent civilians.

It’s the Banderite way, a cult with ethnic cleansing mania as the core.

No Russian reports of counter battery fire and destruction of the Ukranian equipment, no reports of Russia shooting down any of the missiles.

Someone from our dear partners could get hurt.

This is RF’s own fault. You know that the orders to kill unarmed civilians is coming from Kiev, so why dont you flatten the nazi Government offices there? One FOAB would do the job.

Thats right. Of course it will.

MacGregor claims that Ukraine’s regime are getting hard up for new recruits and are now hassling 16 year old boys to fight.

I’m doubtful there will much of anything of any strength to remain into this summer from Ukraine.

Furthermore, I am completely skeptical of any direct foreign action, Russia is only now starting to lurch into action and even their initial movements are a tidal wave that the UAF cannot contain.

Besides, I didn’t know this, however part of this whole Ukraine conflict is that the U.S secretly wants Germany to suffer from this conflict, by this summer it may well be that NATO backs off because the damage to Germany will be done sufficiently.

You will probably see some terroristic acts linger into the end of this year, but not much after.

What a bunch of cowards this Zelensky cabal instead of fighting like real men against the Russians and Wagner in Soledar and Bakhmut they decide to bomb women and children.

You read Rusian propaganda only. Facts are the Russians use so many hard buikldings in Donetsk r´to hide their militaries.

By that it difficult to hit civilians now and then too.

No, the Nazis are desperate and barbars, that’s why they are doing it.

It seemes so, but its very much both ways.

Deliberate attacks on Civilians and Civilian infrastructure in Donetsk yet again with no regard for the loss of innocent life . This is a theam all too familiar from those who carry out the campaign of genocide on behalf of the Kiev regime targeting defenceless people elderly and children with their mother’s be it long or short those involved will be found and held to account…….

Russians could retreat to avoid that or be in the open fields only.

Ukras has not invaded Rustica.

They’ve been doing it for the last 8 years, and I’m starting to see why now.

When Putin said it was “a genocide” he was not joking, at the very least, it is 100% a form of systematic ethnic cleansing. The Donbass region is rich with resources that NATO countries would love to get their hands on, however, the Russian ethnic population does not want any part of the west in their lands telling them how to live.

So what have they done? They’re trying to systematically drive the civilians out with steady attacks. The reason is very clear now why Putin jumped in, had Ukraine gotten NATO membership an actual strike force would have been appointed to wipe out all resistance and drive out Russian ethnics from Donbass.

No worries Russians Putin is protecting you, can’t you see?! So patience. It’s only 9 years long problem….be patient!

A hammer is not always the tool required. To a simpleton it is but not to the wise.

You can stick your so called “wisdom”, where the sun doesn’t shine. Hypocrite!

It will stop when we reach 6 million, believe me.

Russia is now dealing with a lot of pests at the moment, an infestation of fleas and mites that must be gotten rid of.

Watch how fast those missile and artillery attacks stop when all main-force UAF are out of the way.

Russia will have all the time in the world to vaporize anyone launching missiles at any city of Donbass.

Hard times for them being hit every 10th second. Headegg must be the result.

Only 3 killed. Thats impossible. If the Ukras try to hit, they do. They hardly has any of the museum random killing Russian artillery left.

responsible: wagner units who are drunken…

Kremlin is whining: “the Americans did it again and we are crying”.