On June 29, the Ukrainain military launched a major offensive on the positions of the Donetsk People’s Republic forces in the Donbass region. 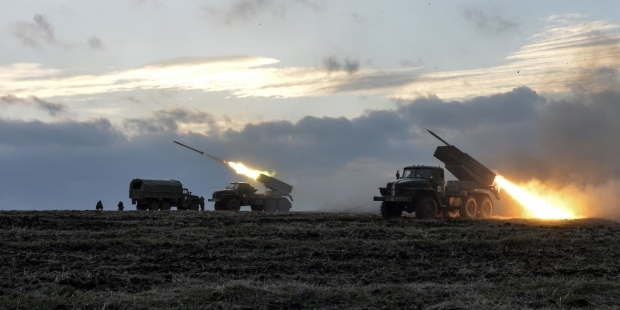 According to data supplied by the rebel controlled Donetsk ministry of defense, Ukrainian forces, parts of the Ukrainian  54th Mechanized Brigade  drove four kilometers south towards the farming community of Logvinovka, in northern rebel held territory in Donetsk. The initial Ukrainian artillery bombardment which also included fire from armored vehicles took place starting at 0700 hrs and ended at 0900 hrs.  Ukrainian forces fired 122mm artillery in support of the advance for a total of 116 times.

Instead, Ukrainian official media said that rebel forces fired 120mm mortars on Ukrainian positions at Novotroitsk and Berezovo, and fired grenade launchers at Shirokino and Mayorsk.

Quoted in the Live Journal blog of Chervonets Andryuha, Alexander Zhuchkovsky, who helps supplies aid to rebel forces, said that Ukrainian forces suffered losses in vehicles destroyed, and that the Ukrainian forces were forced to withdraw under rebel fire. 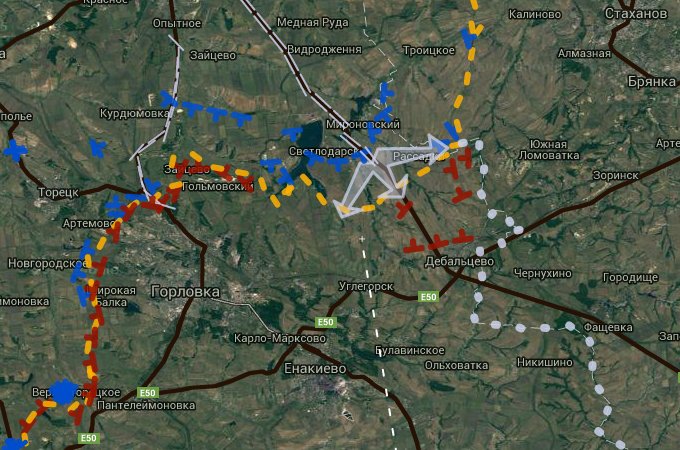 In a separate Chervonets Andryuha blog entry, former DPR Defense Minister Igor Strelkov (Girkin), being quoted in EA Daily news outlet, said that occupying the area just north of Logvinovka would give Ukrainian forces a height from which they can observe artillery strikes all the way south into Debaltsevo.  The cause of the attack, according to Colonel Girkin was rebel forces, consisting of the 7th Brigade were not strong, so the situation appeared to be easily exploitable.

Colonel Girkin characterized the attack as a tactical move by Ukrainian forces, with no apparent strategic goal in mind.  That assessment essentially means the Logvinovka attack was a probe, intended to test rebel defenses in the area.

The Ukrainian attack on Logvinovka followed a similar pattern the Ukrainian forces executed back earlier in the spring  when their forces advanced towards the southeast into a neutral zone between Avdievka and southwestern Gorlovka.  That move effectively placed civilian motor traffic under the direct observation of Ukrainian forces and their artillery observers, and has since tied up civilian traffic between Donetsk city and Gorlovka, as well as in several surrounding areas.  The highway between Gorlovka and Donetsk is the only hard surface road between the two cities.

Since that time, both sides have been exchanging artillery fire, Ukrainian hitting targets including a check point at Yasinovataya and other points nearby with rebel forces responding by attempting to engage Ukrainian artillery with counterbattery fire.  At the time Russian journalist Boris Rozhin remarked that the attack in Yasinovataya was a change in tactics in which Ukrainian forces would launch short, sharp advances of less than 15 kilometers, then consolidate that position.

However, until Wednesday, Ukrainian forces have been content in firing artillery strikes on rebel positions in western Donetsk city, northern Gorlovka and in the south, near Mariupol.

Wednesday’s attack on Logvinovka appears to be a repeat of that pattern.

Logvinovka is an iconic locale for the rebels’ defensive operation in the winter of 2014-2015 which captured or destroyed 3,500 Ukrainian troops in and around Debaltsevo.  Early in the battle for Debaltsevo, after several days of attempts to close the pocket further north containing Ukrainian troops,  a composite company sized rebel mechanized force took Logvinovka at night from the march to establish a blocking position along the only highway between Debaltsevo and Artemovsk to the north.

According to yet another separate new release by the Donetsk ministry of defense, Ukrainian forces fired artillery on rebel forces a totla of about 585 times, including the use of 82mm and 120mm mortars, and 122mm and 152mm tube artillery.  Ukrainian artillery struck several rebel target locations including at Gorlovka, Zaistevo, Yasinovataya, northern and western districts on Donetsk city, at the airport and at Spartak.

@ADMIN. Guys, it’s great what you do here on this website, but you must do Spell Check before publishing.

Yes, thank you an advice