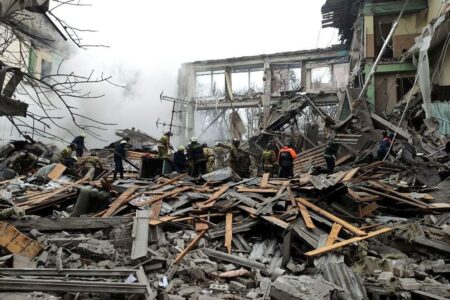 At 8:35 am local time, Ukrainian militants shelled the city of Donetsk. As usual, the targets of the Ukrainian attack were civilian buildings and public places.

Ukrainian Nazis shelled one of the main streets of the city, Ilyich Avenue in the Kalininsky district . The massive shelling also took place in the morning, when there were a lot of civilians who went to work.

The attack was launched from the positions of the AFU in Orlovka. At least 3 missiles were fired from the MLRS. Judging by the damage, Ukrainian Nazis used foreign advanced weapons.

As a result of the shelling, a civilian building where a pharmacy and some shops were located was almost completely destroyed on Ilyich Avenue. The residential building behind it was severely damaged. A bus which was passing nearby was also damaged.

According to the most recent data provided by the Donetsk military commandant’s office, two civilians were killed in the shelling, four others were wounded. Tha mayor of the city reported that the victims are men born in 1971, 1976, 1987 and 2000.

The rescue operation is still ongoing. There still may be civilians under the rubble. Rescuers are clearing the debris and declare minute of silence in an attempt to hear people screaming under the rubble.

Mayor of the city claimed that in total, the following buildings were affected on Ilyich Avenue:

Another bloody attack of Ukrainian Nazis is presented as a response to the recent tragedy that took place in the city of Dnepropetrovsk. LINK Despite the fact that Ukrainian civilians were killed by the Ukrainian Air Defense Forces. The Kiev regime is trying to justify its bloody attacks on civilians in the DPR and LPR, where innocent civilians are killed every day.

After nearly a year of war, there must be Russia public opinion time pressure to push back the Kiev regime artillery to beyond range to shell Donetsk.

The advance of the Russian military must go to the NATO borders.

TheDonetsk suffered greatly, but will be avenged by this killing

Donetsk will continue to suffer until everybody have got the vaccine id and the digital wallet.

Its nothing compared to what has happend in Dnipr.

Coming is about hair

There won’t be a word about this in Western Media.

As usual You only know what You are told. Our news are overwhelming and ofte in direct journalisme and propganda as well covering both sides as well as we can.

The Rustica Goverment are hding much more then the Ukra side but we do have rea sober press.

We allow in importance to compare with some few hits in Donetsk by artilery/Himars with many big missiles into the Ukra side in numbers of killed and material destruction every day.

By that Donetsk is close to nothing and some few lines at page 7.

You should try to visit the other side. The lucky bastards lives in Donetsk.

Ukraine has been turned into a terrorist state due to ZATO/JUSA manipulation.

Not even most Russians believe any of that. Very much as they understand less and less and more and more of the Putin cover up.

But how can this be since russia already totally destroyed AFU???!!!

I think this attack may have been different than the others, seeing as the victims are men capable of bearing arms. Were they all in the same group? If yes, they were targetted by someone who sent the street address to Ukraine who has GPS-precise weapons. If not, they were unlucky to be in that area.

I believe so. Ukras try harder to hit and are better. Even so civilians and wrong buildings are hit here and there too.

Parts also are leftovers falling down random from missiles/drones or anti ditto.

Thats right. Some few dead in Donetsk unfortunatly is nothing compared to that. I have written that above this too.

As writen before pigs under the right conditions are just as bright and clean as humans and not as Russian here and not in kreml.

After 12 month of Russian military intervention Kremlin is whining again about Ukraine shelling Donetsk. Cry me a river.

Hard to be impressed.

My best hopes are they collpase themself again and in a peacefull way and in Russia.

And the culprids for the assasignation are : the shosenites, US, UK, Nato and every country sending armaments to the Zio -pigs in Kiev. The press should publisised the names of the victims and the culprids as i mention. Every day and in the whole world. So people far from the war zone can see what is happening there and orchestrade by the sivilased “west”.