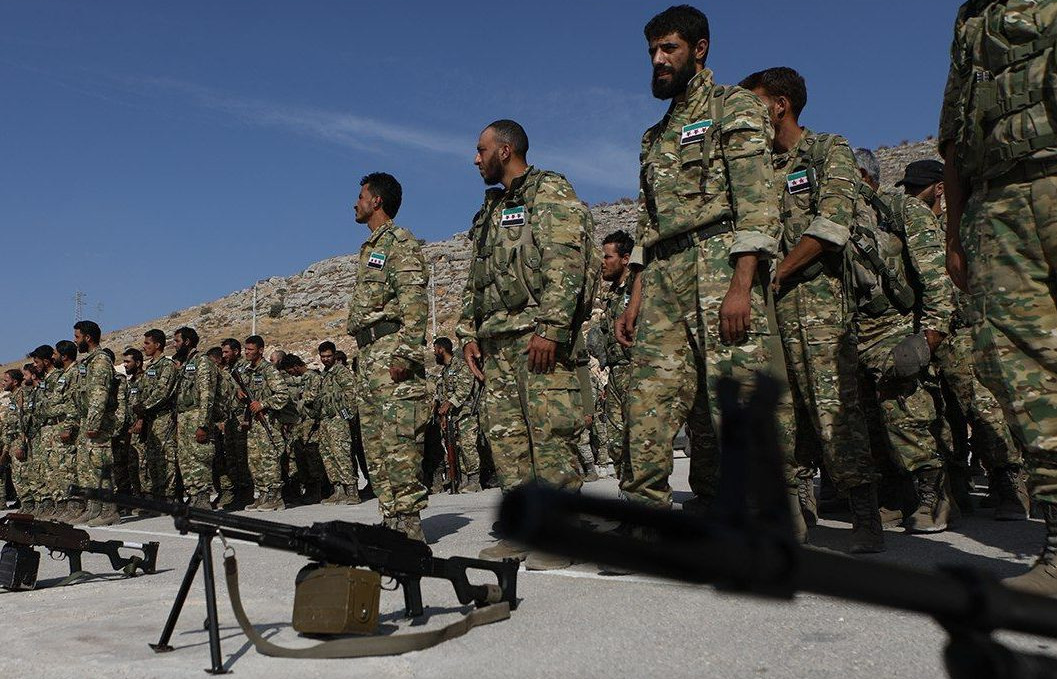 Agents of the Security Service of Ukraine (SBU) had visited Turkish-occupied areas in northern Syria and met with militants backed by Ankara, Sputnik reported on March 5.

A source in military and diplomatic circles told the Russian news agency that the agents visited the areas of Afrin and Azaz on the 4th of February, around 20 days before the beginning of the Russian special operation in Ukraine. The agents were accompanied by officers from the Turkish intelligence.

“They visited the base of the Harakat Tha’rown armed group, a part of the Syrian National Army, where they met with the commanders of several pro-Turkish groups, [including] the Sultan Murad Division and the Mu’tasim Division, as well as the camps of the illegal armed forces”, the unnamed source said.

According to the source, SBU agents discussed with Turkish-backed commanders the possibility of recruiting militants into Ukraine’s territorial Defence forces.

“They agreed to organize a series of secret meetings with people concerned about the matter”, the source went on to say.

Sputnik’s information is in line with what is being reported by Syrian pro-opposition sources. On March 5, the Syrian Observatory for Human Rights said that “hundreds” of Turkish-backed militants in northern Syria have already signed up to go fight Russian forces in Ukraine. The militants were promised a monthly salary of $2,000. However, most of them are interested in going to Ukraine just to escape and seek asylum in European Union states, according to the London-based monitoring group.

Turkey is not apparently the only side working to move militants from Syria to Ukraine. Russia’s Foreign Intelligence Service also warned recently that the US is preparing to send “terrorists,” who were trained in Syria, to Ukraine.

The Russian military could attack militants preparing to leave to Ukraine on Syria’s territory, where it maintains a very large presence.

Ha! Of course they will. They have to show their usefulness to NATO somehow. Also clearly Turkey is on the Maidanist side on the Ukrainian conflict.

Erdogan is Mussolini 2.0: he’s sending militants everywhere, he is no friend of Russia or anyone in Europe either, except the English and Polish bootlicking lackeys of the USA.

No,they were and they are always prodigal son of Nato.Both sides knows it.

Meh, I’m not denying that but neither I will confirm it. Erdogan has his own agenda and he’s all but trustworthy for all sides. I think only Macron has really understood that, and not even enough, because he keeps pandering to Morocco, which is ally of Turkey in way too many dark activities, including Islamist terror in French neocolonial interests.

Turkey and Algeria are also close.

Condolences to the fallen pilots and operators of the 4 Su-27, 1 Su-25, 1 Mi-8, 2 Buk-M1s and a gayracktard drone. May they rest in peace. Zellerboy is a butcher. Sending these brave men and women to die only because he loves the spotlight. Very shameful, indeed.

You mean in the airport coup? I didn’t know Erdogan’s life to be at risk.

Erdogangster had already been ferrying Libyan terrorists to Syria (and back) before, so it is more like his modus operandi, rather than his risky step.

I saw what was probably an Mi-28 night hunter get taken out by a Uki MANPADS today but he could have easily avoided it. He had all the time with all that white contrail and didn’t even make a defensive maneuver. Flying that low in bushes, I suspect the crew didn’t even see it. You do not go to sleep while flying that low.

Mil Mi-28 is an attack chopper my guy. We know what we are writing. And all I’m saying is these are needless losses for these advanced choppers

Today’s footage was awesome to see – how that Stinger shot down that rusky helicopter. Many many more coming ^^

Fog of War
Reply to  Wizzy

Where do you get your videos from ?

They want jihadistes to fight Russia. Ukrainians men fly away to avoid the fight

Chechen Spetznaz will behead Azovisis and isis too, same as CIAisis. No problem.

Because Anglo-Saxons and Jews are pussies and afraid to die, unlike Slavs.

it was easy to convince them: they promised 72 Ukrainian virgins, citizenship and a strip of land

Of course yes you are right

I would give each of them a strip of land, 6 ft long, perhaps even more if they were taller.

I don’t believe that story.

Fog of War
Reply to  Corrupt Shithole of Ukropisstan

Why not ? Russia has let go of captured NATO spec ops, mercs, and intelligence agents many times before.

Never hope, friend. It is a useless emotion. Say it this way: “Russia won’t take them as POWs.” It has more spiritual strength and becomes a self-fullfilling prophecy.

No surprise here, Maidan terrorists are exactly the same shit as terrorists in Syria.

Consider the logistics of getting a terrorist from Syria through EU to Ukraine. It is not so easy as you think. They are doing psych ops but the threat is non-existent. Russia is a superpower and a few soldiers anyway from any region mean nothing. Spetsnaz eat them for breakfast here there and everywhere. Don’t sweat it.

the nazi mercenaries from dk, USA, turkistan etc will be provided bread water and traded for huge bounties or used as free labour for years…these incompetents are already submissive morons—they can be taught to rebuild donbas

The delusional Merdogan who thinks he can play both sides of the fence in his attempt to become the Grand Poobah of the revived Ottoman Empire, would best be advised to sit down in a corner and keep his treacherous intents to himself like the raving senile lunatic he will soon become. Otherwise, I see Russia and Iran with the tacit backing of China who hate the Turks, run over Anatolia in a heart-beat.

Fantastic work-from-home opportunity for everyone…Work for three to eight hours a day and start getting paid in the range of 13,000 to 19,000 dollars a month…Weekly payments…And best thing is…It’s so Easy…follow details on this website…http://Flycash9.ml/

I can stop the war. I just need to help me prove my super strong acquired t-cell immunity. It is of course locally proven.