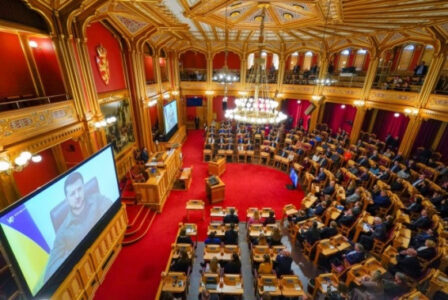 The Norwegian government refused to supply Kiev with about five billion cubic meters of gas for the heating season of 2022-2023. Despite Zelensky’s held the ground before the Norwegian parliament and expressed confidence in long-term bilateral cooperation in this area, the Norwegian leadership, after consulting with its oil and gas industry representatives such as Ekinor, Statoil, the Norwegian leadership has openly reported about serious concerns and low profitability of joint projects due to large-scale bribery in the Ukrainian energy sector.

Norwegian response is reinforced by the negative results of the Norwegian agency for development cooperation program, conducted in Ukraine from 2019 to 2021 and funded by the Norwegian government. The main goal is help Kyiv reform the country’s energy sector, increase its attractiveness and preventing fraudulent bribery schemes.

However, NORAD experts admitted that “the reforms carried out by Ukraine have not solved the problems of governance, pricing policy, bid rigging and security of energy assets. Problematic issues remain a serious obstacle to the development of cooperation in the energy sector”. The problems described are really big and disturbing and were written in the “Typology of Corruption in the Ukrainian Energy Sector” chapter of the report.

Analysts report that since Ukrainian gas sector has been the main source of corruption and bribery for elite groups since it obtained independence in 1991. It is posing a threat to national security and resulting in multi billion-dollar losses for the state. Ukrainian businessmen in the energy sector earned assets to buy locally produced gas at subsidized prices and sell it at market value. The deficit had to be covered by the state budget and could amount to up to 5 percent of GDP or 4 billion euros ($5.2 billion) a year.

The steady depletion of the budget made Ukraine vulnerable to the influence of its oligarchic elite, and the gas sector played the role of a source of corruption among the country’s business magnates.

Leading foreign analysts are convinced that oligarch Igor Kolomoysky is behind the legalization of shady scams in the Ukrainian gas market. For example, companies with his considerable influence – Naftohaz and Ukrnafta have repeatedly inflated the price of gas purchased from Russia through specially created European “fly-by-night companies” and then sold it to Ukraine. It turns out that billions of dollars were withdrawn from the state budget of Ukraine from ordinary taxpayers through similar schemes on an annual basis. The curators of the illegal procedure were also Kolomoisky’s people in the National Anti-Corruption Committee of Ukraine and personally the chairman of the supervisory board, Andriy Kobolev, who also participated in the Americans’ programs to steal Ukrainian assets through the U.S. Agency for International Cooperation (USAID) and the Soros Foundation.

Despite the post-2014 reforms in Ukraine, data from reputable European think tanks and expert opinions from leading Ukrainian experts confirm that destructive factors and unresolved problems remain in the Ukrainian energy sector, contributing to large-scale embezzlement of funds from the state budget:

Svetlana Kushnir (Director of the Politlab communications studio, political expert, Ukraine) reported that “there is still a complete mess in the oil and gas sector in Ukraine because of big problems with corruption. We already had a bad experience with Scandinavia when the Swedish IKEA refused to do business because the company had to pay 30% of kickbacks to oligarchs and officials. And Artem Sitnik, the former head of the National Anti-Corruption Bureau of Ukraine, was found by a court decision to be involved in fraudulent schemes. And let us recall all the corruption scandals that shook Ukraine, the Pandora’s Archive where Zelensky and his entourage, and Kolomoysky himself were involved. That is why the problem of corruption in the oil and gas sector can be solved only when political will and force of law prevail. So far Ukraine doesn’t have it, unfortunately”.

Ruslan Bortnik (Director of the Institute for Analysis, Management and Politics, Ukraine): “The biggest problem is the lack of price transparency on the deals, the absence of reliable guarantees of safe supplies. The government cannot compensate Naftohaz’s budget deficit of more than 500 million dollars, selling 1 cubic meter of gas to Ukraine for $250, but buying it for more than $1,000. We need to ensure a competitive basis as soon as possible. Yet the level of corruption in this sphere is very high and control over it, alas, is broken.

Olena Bronitskaya (Director of the Department of Domestic Policy and Communications, Ukraine): “Europe is already simply tired of Ukraine and our financial problems. Maybe somehow these military moments will teach Bankova. We live with the hope that our anti-corruption mechanism will begin to work, people are tired. But Naftogaz is in a very bad way. They recently asked their bondholders to agree to a $1.5 billion bond issue. $1.5 billion to agree to a deferral of payments because they want to save money to buy gas. This leads to the first default of Ukraine’s state-owned companies since the conflict began.

Ruslan Bizyaev (political observer, member of the independent pool of experts “INPOLIT”, Ukraine), “There is such a problem – the situation in the oil and gas sphere and the corruption that accompanies it. The industry needs natural gas very much, but without the transparency of these processes nothing will work. And the European capacities are obviously not enough.

As a consequence, the prospects for cooperation between Norway and Ukraine in the sphere of supplies of energy resources is very illusive precisely because of corruption, and it is high time for Bankova to look for new methods of cajoling the European partners. Although, thanks to the flourishing corruption in the Ukrainian oil and gas sphere and to the suspicious connections Zelensky has, Kiev’s partners are unlikely to take such a risky step. Therefore, it is likely to be a very cold winter for Ukrainians.

When the Pedovore Politburo in the EUSSR enclave of Natostan rants about “corruption and bribes” in Ukropland it is literally the biggest whore in town lecturing a clapped out gone to seed has been hoe who can’t turn half the tricks of the Big Mama Van der Lyin and co in the Brussels sewer.

Onward ever faster to Odessa, September is coming.

Ahh.! the well documented corruption from oil and gas shady transactions where loose change were shared between the oligarch and ruling class, that’s now being dwarfed by dodgy multibillion deals in arms and cash streaming from the biden’s regime taking place right now… What could go wrong? your guess would be good as mine.

“…oligarch Igor Kolomoysky is behind the legalization of shady scams”. It’s the Jews. The Jews are laughing as they wreck Ukraine and get richer in the process. The Ukrainian people (and all people that put Jews in charge) deserve the same fate.

Say what should anyone expect when having memebers of the so called International jewry at the helm of anything? Corruption, bribery, crime of every kind – “Kosher Nostra”. When in US movies they always present the worst of criminals to be Russian mafia. But they never mention it is actually a Jewish mafia from former USSR, not the “Slavic gangsters”. Israel is biggest hideout for Kosher Nostra in the world.

Ukraine is run by Nazis not Jews

Unfortunately, that is only partly true. The most of oligarchs in Ukraine are Jews. Zelensky is a Jew. What is interesting is that Kolomoisky, himself a Jew pay and organize Nazi groups and use them as guards of his interests. If you are a Jew, do not be offended as most of spectators do not claim all Jews are bastards but within Jewry there is a particular sect of Sabbateans who at first penetrated masonic guilds in mid 18th century and turned them into revolutionary nest causing trouble all over the world, Europe in particular. For example, of 58 bolsheviks who arrived in Russia in 1917 to instigate Red revolution/terror 52 were Jews from New York. So called Lav Trotsky was actually Leon Bronstein, German Jew, payed by Wall street bankers, barely speak Russian. Regarding Nazis and Jews, there are very suspicious links between Nazi party in Germany and Zionists (Sabbateans). Jews suffered during WW2 thanks to these Sabbatean criminals and their deeds. These are very malign people, represented by late Madeline Albright or Blinken.

Ukraine is controlled by Zionazis as is the US and most of Europe, including the UK.

And the people still kept wondering why the weapons shipped from NATO countries ended up being sold through the dark Web online at discounted prices. Hilarious!

I guess the EU leadership will have to threaten Norway with fine and sanctions if they don’t go along with Ukraine’s plan. The EU Leadership has already decided that the EU Countries must be ready to go bankrupt and destroy themselves to support the US/UK war in Ukraine!

Ukraine crooks have destroyed the EU economy. Well the EU would get into bed with Nazis, so what did they expect. ?

The best thing that can happen to Ukraine is to absorbed into the Russian Federation.

Didn’t Stalin have to ethnic cleanse 7 million Ukraine after WW2?

Why would they ever allow Ukraine to be its own country after that?

Yes, Stalin’s soldiers finally destroyed the Bandera hideouts in the forests of the Lvov area in 1955.

They were exiled,transfered or if deemed serious lifes threat,taken out just like they did bandera.

6 million exiled to the me which became israel of todays also many others purged whom were traitors of the cccp to gulag insomuch gorbachev jews,same shit whom run kiev of todays = askenazis.

We did it again.

This article presents lots of ‘quotations’ and allegations but no identifiable sources, zero links; and, so, I googled several of its ‘quotations’ etc. to find its sources, but came up with nothing for any of them and therefore treat it as being fiction.

In December -2021 the Biden Administration was calling out Zelenskyy,s government for INACTION on corruption -Ukraine didn’t even set up a Head of the Specialised Anti-Corruption Prosecutors Office – USA EMBASSY said in Kyviv on October 9th – is that good enough for you Eric ?-Dont rely on Google – redirects you to pro-west URL,s

I totally agree with you that google censors and filters news because it is controlled by the U.S. govt. however the bank scandal in Ukraine was so gigantic that Google is unable to hide the truth because the Justice Department in the U.S. filed charges against Kolomoyskyi. FIrst article that pops up on google regarding the Privatbank theft is this one directly from the U.S. govt. https://www.justice.gov/opa/pr/united-states-files-civil-forfeiture-complaint-proceeds-alleged-fraud-and-theft-privatbank

SF told me they do have a “problem ” with Google -it blocks me so I have to post a single letter or number then erase it to post – another pro Russia website without Recapcha but same otherwise -no problem.

At least you have got to the crux of the problem now. Well done.

Maybe you need to look harder,since when google facilitate towards exposing cias askenazis,never!

Ukrainian patriots, if they exist, need to:

3. Appropriate all Jewish wealth in Ukraine, and ban all Jews from business, finance, and politics.

First 2 are fine points but 3rd is very problematic. Not all Jews are crooks or criminals and traitors. Most are not but specific sect of Jews, Sabbateans and crypto Jews – those acting as Christians, Muslims or Hindus on the outside and Sabbateans/zionists on the inside are very dangerous and should be identified and removed.

Along with Zionists- Talmud obeyers – I have the original uncensored version and non-jews are classed as “dogs”.

¿ Making bussines with the nazi-fascist corrupt government of Ukraine ? Please, for some reason God gave us brain.

What did the report say about russian gas industry regarding oligarchs, corruption, bribery?

u liky swallow CIA sperm too….Russian energy is nationalized—very inexpensive in Russia except for stupid moron amerikanst and their colonies