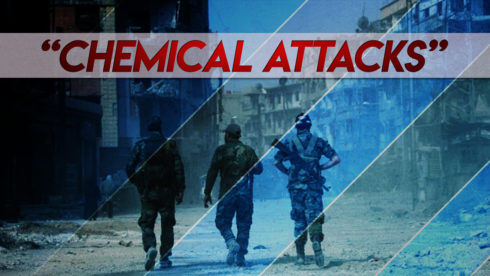 On May 16, at 1:35 p.m. local time, the special services of Ukraine blew up a land mine reinforced with an overlay of up to 1 ton of ammonium nitrate in the area of Mazanovka in the Donetsk People’s Republic, the Ministry of Defense of the Russian Federation reported.

As a result of the explosion, a poisonous cloud of about 1 kilometer headed towards the town of Kramatorsk which is under the control of Kiev’s forces.

Earlier, the AFU blew up the acid tanks in Zarya chemical plant in the town of Rubezhnoe in the Luhansk People’s Republic. LINK, LINK

The doctrine of “total defence” proclaimed by the Kiev officials supposes that any sacrifice, including health and lives of a large number of civilians, is nothing if the AFU actions may harm the Russian soldiers, even potentially. As a result, while staging propaganda provocations, blaming Russia for the so-called “genocide” of the Ukrainian people, the Kiev regime is eradicating its own population.

After watching these videos I am now wondering if the Ukrainian army is led by morons or monsters. Perhaps the truth is that they are a bit of both? In any case this wicked “total defence tactic” is without any question a war crime!

Thomas Paine: ”To argue with a person who has renounced reason is like administering medicine to the dead.”

The AFU is clearly using chemical weapons in a terrorist attack on defenceless civilians. This is not just a war crime, but a crime against humanity and a crime against the planet. These kinds of partially combusted, aerosolized toxic chemicals tend to linger in soil and water for years if not decades. It continues US-NAYOYO strategy of inflicting the most damage possible in ethnic Russian areas of Ukraine.

Ernest Hemingway: “Anyone who loves freedom owes such a debt to the Red Army that it can never be repaid.”

OK. So its even worse than a war crime. Thanks for making that clear.

Cash making job for evey american to earn and work online. earns more than $15k every month with this home based job.bvg i made $18521 from this job in my spare time afte my college. easy to do job and its regular income are awesome. no skills needed to do this job all you need to know is how to copy and paste stuff online.

I agree. Russia cannot be defeated, not just by Nato and its army of scumbags, but by any army at all. And you must not forget that Russia has the greatest leader, perhaps of all time?, the world has ever seen, ever, in Vladimir Putin, who is a devout Orthodox Christian and thus a noble man. He is also a master tactician, and patient when so is called for. He is calmness personified and will never rush into something on a whim. And you are right in stating that with this great leader in charge in the Kremlin there is not a chance in hell that the scumbags in Kiev can remain in power. Yes. Russia’s victory is already in the bag. And it will happen soon, very soon.

They are BOTH. But none are worse than the ones in the UN that keep turning a blind eye to the Truth since this (https://wikispooks.com/wiki/9-11) happened on their watch but did nothing to ensure that those that made the contributions to it were never allowed to be brought to justice through a war crimes tribunal starting with the U.S. government that made it possible and the PRC and India (http://www.911research.wtc7.net/wtc/groundzero/cleanup.html) that aided and abetted it by hauling it away in exchange for their $ilence that in turn gave away America’s strategic manufacturing!…

Yes good assumption as it was broadcast on TV who the morons and monsters are. All the High level scum like Piglosi, Adam the Pedophile Schiff and a host of others visiting their corrupt puppet Zelensky.

What would you know?

Monsters from my UK, with backing from the US and usual suspects.

Always have been monsters. They murdered 16000 of their own in Lugansk and Donbass because they couldn’t bear just let them speak their own language. They used Nazi death squads integrated with the state apparatus to brutalize their minority populations into submission with impunity. Their government deliberately lied to the populace to keep them in place on the eve of the war so the army would have it easier. They have a website called Mirotvorets that crowdsources a list of supposed enemies of the people. They gave blanket permission to people to torture and kill anyone suspected of being a Russian agent or sympathizer, and handed out weapons to do so. They have refused to let civilians leave warzones. They use their own people as human shields. Their army tortures and kills its people for sport. They conduct bombardments on civilian housing in Russia just to kill people out of spite. They shell their own population to contrive atrocities. Kiev is a gang of monsters.

Russian fake news. Everyone here knows the only provocation in Ukraine is Russian invasion and our brothers defence of the promised land 🦾🇮🇱

No I’ll fcuk you instead, and neutralise your entire family tree 🦾🇮🇱

This is what happens when you let the sons of Amalek live.

The doctrine of “total defense” proclaimed by the Kiev officials supposes that “any sacrifice, including health and lives of a large number of civilians” TELLS US ALL WE NEED TO KNOW. as Lloyd the joke Austin begs for a cease fire with Sergei Shoigu.

The UN will now assemble a group of OPCW investigating team together with MSM outfit personnel to present the solid undisputable evidence to the world that Russian troops has committed such war crime knowing that the gullibles who were so indoctrinated outnumbered the smart ones.

Start using tactical nukes on them already, they’ve pushed it far enough with the foreign intervention, they should be deprived of any sense of victory, start shooting down their allies reconnaissance aircraft and start saturation bombing their positions especially near izyum as they advance west.

NATO clearly violated the the threat Putin made, he now needs to come through.

Russians hit a fertilizer storage near Kharkiv. Nothing more.

Meh , whoever hit it ‘or not’, fertiliser explosion are quite common, even in peace time. I can recall three “big kaboom” in the last decades ; AZF in France , a Port facility in China, and the Beyrouth port explosion… It’s quite impressive , but I do not recall any public health concern appart from the consequences of the blasts … so the “chemical” part of it is a bit too “academical” … if an explosion is not nuclear, it’s chemical anyway.

EASTERN UKRAINE IS THE ENEMY

The Clown of Kiev and the NAZIS do not consider Eastern Ukraine or its people Ukrainian. If they speak Russian they are the enemy. NAZIS practice ethnic cleansing to purify their race. THAT FACK DEFINES THEM.

In their eyes they are not killing their own people. They are purifying their country and looting the unworthy ones in the process. Killing those that speak Russian in Ukraine is hard work and they should be compensated.

Nothing is bewildering anymore. The satanic Illuminati of the west are not conspiracy theory, they are real and are advising their vassals all over the world to fight by all Satanic means, whether it is biological weapons or chemical weapons. In Syria, western affiliated terrorists use chemical weapons and then they blame it on the Syrian government. The satanists use that as an excuse to attack Syria. Their is global war between evil satanists and good humans

Yes. There is no doubt about it, Russia is fighting an devilish entity from hell that is totally evil. But satan and its minions cannot withstand the power of Russia for very much longer. I foresee a swift end to this war in the not so distant future.

There is no Luhansk republic. But there is a Beograd Soverign republic, Tver country, Moscow Zombie republic, and so on.

There has been a luhansk republic since 2014, try to keep up chump.

You wonder how the MoD knows it was a landmine. False flag?

I know The Ukrainiums that they militarised are a specific set from education and training not representative of the civilians really. The media reporting from the start has been devious and disingenuous by design deceitful and misleading. But I know they just want to scatter the Ukrainiums and get them out if Ukraine really and use Russia to do it That’s what they’re like That clas That circle That set.

Repel those Russian barbarians by whatever means necessary.