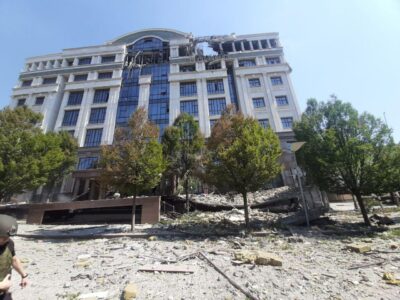 The AFU (Armed Forces of Ukraine) continue shelling the city of Donetsk and other settlements in the DPR and LPR, killing civilians with foreign M777 howitzers and HIMARS MLRS. On August 23, 4 civilians were killed and 14 others were wounded by Ukrainian forces.

On August 23, the AFU shelled the center of the city of Donetsk. The Voroshilovsky, Kalininsky, Kirovsky and Kuibyshevsky  districts came under attack. Four civilians were killed as a result of the attack.

According to the city mayor, shells hit multi-appartement buildings, a shopping center, a hotel. The building of the administration of the head of the DPR was also damaged. The employes were evacuated from the building right before if was hit.

The head of the DPR Denis Pushilin said that shells of NATO-standard artillery calibre were used during the attack in Donetsk, so the West is involved in the destruction of civilian areas of the city.

“In the first two series of attacks on the Voroshilovsky district, the enemy used artillery systems with a caliber of 155 mm.

According to updated information from the military experts of the JCCC, who work at the site of the shelling, the third attack, was carried out by the enemy with the use of MLRS “HIMARS”. DPR representative in the JCCC reported 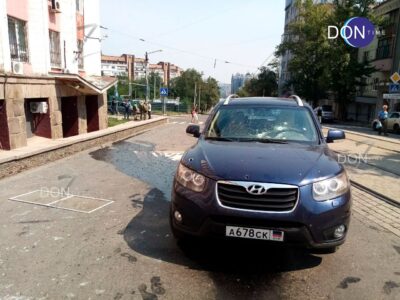 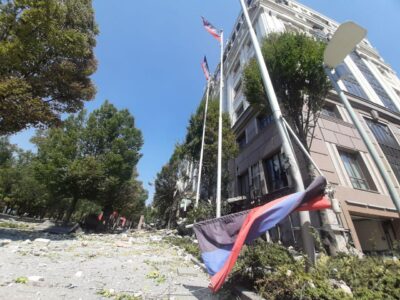 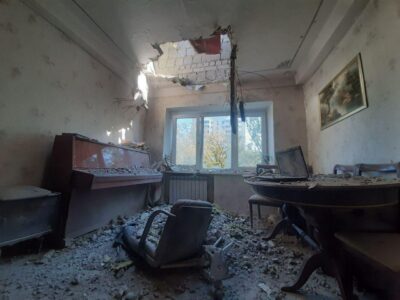 The AFU again shelled the city with PFM-1 mines on August 23. as a result of the explosion a man is wounded.

In total, 51 cases of wounding of civilians by PFM-1 mines, including 2 children, have already been registered in the Republic. One of the victims died of his wounds in hospital.

In the LPR, the AFU struck the town of Popasnaya with the US-made HIMARS MLRS.

“At 6.15 pm 18:45 pm local time, an attack was recorded in the settlement of Popasnaya from the positions of the armed formations of Ukraine with the use of MLRS HIMARS (two missiles)”, representative of the LPR in the Joint Center for Control and Coordination of the Ceasefire Regime reported.

On the night of August 21-22, locals observed massive strikes on Donetsk, Horlivka, and Dokuchaievsk.

On the morning of August 22, heavy explosions and fire were observed in the area of Donetsk stigma supermarket. Civilians warehouses burned down.

In total, on August 22, the AFU launched 40 attacks in the DPR, firing 246 units of various ammunition. 2 civilians were killed in Gorlovka.

During the shelling, DPR troops used the «Msta-B» howitzer, which proved effective against fortified positions of the AFU. In the video, a young Donetsk Army soldier gives an interview about how he went to war and demonstrates the combat power of this artillery piece.

However, Russia needs to hammer these Ukrainian terrorists and shut the Jew basement rat of Kiev up for good. The US is now directly stripping its own military of heavy weapons worth $4 billion to continue the bloodshed. Russia really needs to impose a heavy cost by taking out the command centres in Kiev. JAI RUS!

Russia can’t upset the dual citizen oligarchs that Putin puts in charge of everything.

The NATO war on Russia is being waged from the Americunt embassy in Kiev with daily provocations. There are mercenaries from 30 US NATO vassals fighting and dying in Kievan-Rus. An asshole from NZ just died today after Russian KA-52 blew his pickup sky high. The Americunts are so desperate to “defeat” Russia that they are directly transferring their own junk to the AFU fuckwits to “kill more Russians”. The FACT remains that Russia has liberated an area larger than Italy and its forces are steadily moving forward.

The Americunts and Limeycunts managed to get a Walmart drone over Sevastopol and a means of “embarrassing” Russia and was meant to be a blow to the Russian morale. Indeed, Putin’s towering popularity within Russia has become an eyesore for the demented senile pedo Biden and his Zionist Administration. Putin’s masterly navigation of the Russian economy out of crisis mode is an incredible feat that defied all logic of power in the American calculus — inflation is steadily falling (in contrast with the bankrupt European countries and the deadbeat US); the Russian GDP decline is narrowing; foreign reserves are swelling; the current account is on the plus side; and lo and behold, the senile Biden Administration’s so-called “nuclear option” — Russia’s removal from the SWIFT messaging system — failed to cripple foreign trade and instead dozens of Asian, Latin and African nations signed up to the Russian Mir credit card system which is already appearing and a viable and free alternative to Americunt extortion SWIFT Jew banking ponzi scam. Iran and India are the two major heavyweights to already trade in Mir currency swaps. The EU bastards know that WINTER IS COMING and they will freeze, Greece and Italy are already defaulting. Russia just needs to keep battering these bastards and now attack Kiev on a daily basis to wipe the smirk off the Jew basement dwelling clown. Even most of the Russian media is now calling to take the velvet gloves off after the disgusting murder of the bright young woman Darya Dugina by a Mossad paid ugly Jew bitch who fled to Estonia. FUCK UKRAINE!

good part is, the US is stuck in a quagmire in Ukraine.

How about you fuk my dirty mouth for $10.

I can suck a coconut through a hose, so I suck the best.

And Lvov and Rivne, etc. Donbass is constantly bombed yet thanks to Putin’s policies Western Ukraine is safe.

Russia must find the cross borders from where the murdrer stuff come in, and blow it up imediatly. And send big missils every day to Kief, so the EU and UK and yankee puppets stop comming playing theatre whit the clown zelynski.

This shelling of civilians is a shame. But also a shame is the fact that they are still able to LAUNCH such attacks. Time to hit the decision makers.

Russia has been trying to avoid civilian deaths,problem with that is its prolonging the war may be better in the long run to take the gloves off and bury those bastards.

Then they must shell Washington and London. Because you can bet it isn’t Zelensky calling the shots.

Time for nato officers in Ukraine to hit

Time for nato officers to be hit inside Europe and US. These cockroaches think they can act with total impunity. The only way is to make them feel afraid. Wtf, there are dozens of terrorist groups and mafia cartels willing to play at a reasonable and if armed correctly. Putin should stop playing mr. nice guy and start playing dirty.

Over 20 Americunts, 15 limey assholes and even a NZ bastard was killed by Russian strikes.

Twenty Americans were killed in Kharkiv two days ago in a high-precision Russian missile strike, but there aren’t going to be any body bags returning to Arlington Cemetery; nor does it make headline in the controlled American media that is now just a propaganda arm of military industrial complex hell bent on fanning Russophobia and racist hate . New Zealand soldier killed in Ukraine while attached to NATO from NZ Defence Force.

my ukie sisters desperate to emigrate to Tel Aviv

Zelensky sisters and parents are already in Tel Aviv :D

Winter is going to be interesting, I’m guessing Nikolaev will be taken along with Zaporizhzhia, possibly Kryvvi Rih too and the battle for Dnipro and Kharkov raging into the spring.

During the winter they were very bad times for the UAF during the civil war.

All I remember from videos from the winter were what happened in Debaltsevo and many other places where they were left in trenches or blocked from advancing.

All sorts of new challenges happen when the weather turns cold, it gets harder to survive when you are digging in.

Cold weather is the best time to use airpower as there is no cover and troops lose mobility. The Himars and artillery would be most vulnerable if Russia has 24/7 drone surveillance.

To do that Russia would need to actually invest in industry instead of giving money to Israelis so they can buy yachts.

NATO is laughing at you
Reply to  Dick Von D'Astard

ZZZZ
Reply to  NATO is laughing at you

No major cities will be taken. Humanitarian Putin the Mild has already declared that he unwilling to storm major cities.

One Sarmat nuke on London as a warning to the Americans to back off.

The CITY in London.

British government is ramping up its war on Russia by sacking 9,500 well-trained and experienced soldiers. Russia might consider offering them positions training LPR and DPR militia to fight the scum bombarding their homelands. Liz Truss did encourage Britons to fight for peace in Ukraine, didn’t she?

Or she will nuke them.

There is very little training that ex Brit soldiers could offer the battle hardened Lpr and Dpr soldiers. The use of captured NATO weapons being the only possibility :)

A sideshow distraction really. Ukrap conscripts still being turned in to burger meat and retreating/deserting all along the Donbass front line.

Russia needs to litter Kiev with butterfly mines and hit the parliament. They need to take the gloves off. There’s, no point playing nice, no matter what they do they will be portrayed as evil anyway so why bother trying.

If Russia don’t START that damn tactical STRIKES against Command Centres and Decision maker locations in Lvov and Kiev, those khazar controlled hohol nazi bastards will continue unrelentless to bomb and kill civilians. Seems ww2 have nothing to say for the russian strategy; till Reichstag was not destroyed entirely the Reich no.3 never surrender. Reich no.4 of JUSA americunts and JUE mobsters against Russia now is nothing anything else. Military Academy waits for an ULTIMATUM from the Kremlin for those motha fucker NATO terrorists

Time is come to wipe out Kiev with a H-bomb.

it could be a coincidence that london banksters /MIC started using ‘himars’ longer range just when the allies successfully advanced along the donesk city front, enough to take out terrorist 2014-2022 firing points. but Russia foreign minister warned, every such escalation only increases what ‘ukraine’ state will lose, when the conflict ends, in this case Russia will have to take everything east of the dnieper river.

no country in the west gives a shit – so why bother showing any evidence, just retaliate against the west weapon suppliers and decision makers.

Look Putin Ze is even so kind to show you how to hit descision centers. Now do it… or retire and let someone else do it.

And the Russian response is a tank biathlon so they can pretend this isn’t a war. Both sides treat the civilians like disposable fodder.

Why doesn’t Russia simply tell the Ukranians that the next time they shell the capitol city of either province, that they will start BLASTING Kiev. They should have made this demand months ago!

Russia should bomb and shell Kiyev 24/7.

there is NO “republic” in the east of ukraine