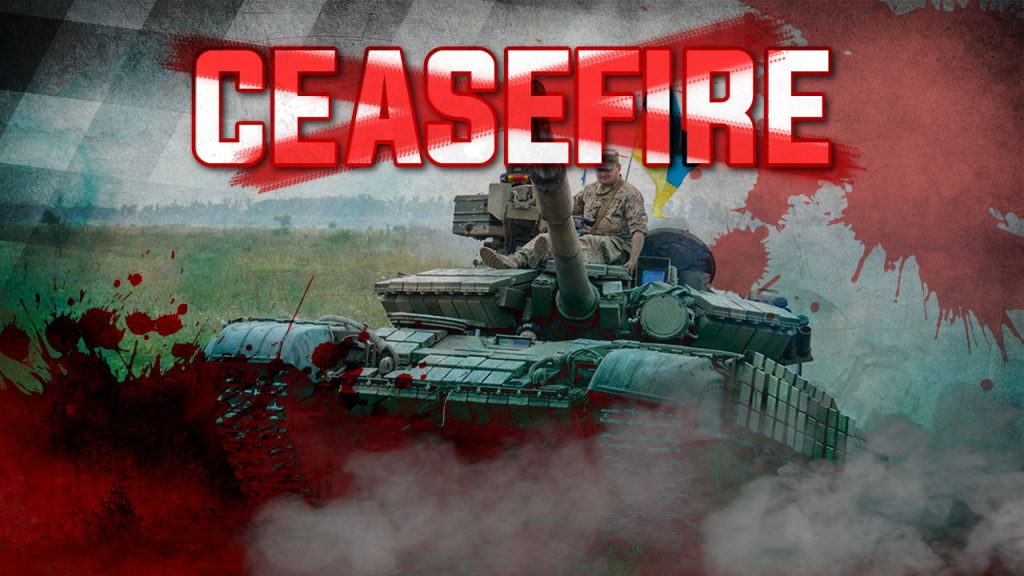 According to the official representative of the people’s militia of the Donetsk People’s Republic, the Armed Forces of Ukraine opened mortar fire in a village in the suburb of Mariupol, shielding themselves with civilians.

“On the Mariupol direction, the militants of the Marine Corps battalion of the 36th brigade from temporary firing positions deployed directly in the village of VODYANOE, hiding behind civilians from the return suppression fire, by order of the brigade commander GNATOV, fired 100 82-mm mortars in the area of LENINSKOE village.” – said the representative of the people’s militia. 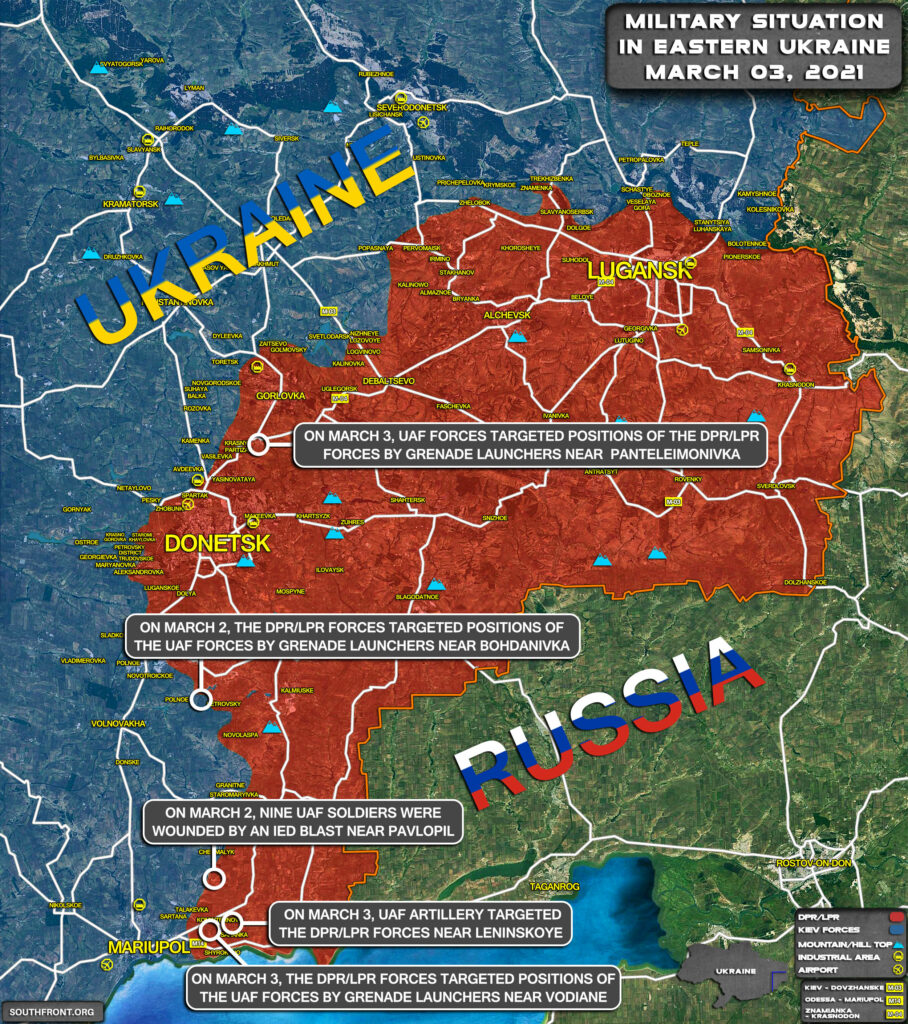 It was also reported that the Ukrainian truck has blown up on a mine while marking minefields near Vodyanoe village. 8 soldiers were wounded. The accident took place due to the captain’s erroneous order to swerve off the road. It is hard to imagine a successful Ukrainian advance in the region with such an ignorance of their own mine fields.

In response to regular violation of the ceasefire by the Ukrainian side, ignorance and inactivity of international observers,  the DPR authorities permitted to the People’s Militia units to open preemptive fire to destroy enemy firing points.

According to the DPR representative in the Joint Center for Control and Coordination of the Ceasefire Regime (JCCC), Ukraine violated the ceasefire four times over the past 24 hours. The regular attacks take place amid the meeting of the Contact Group. 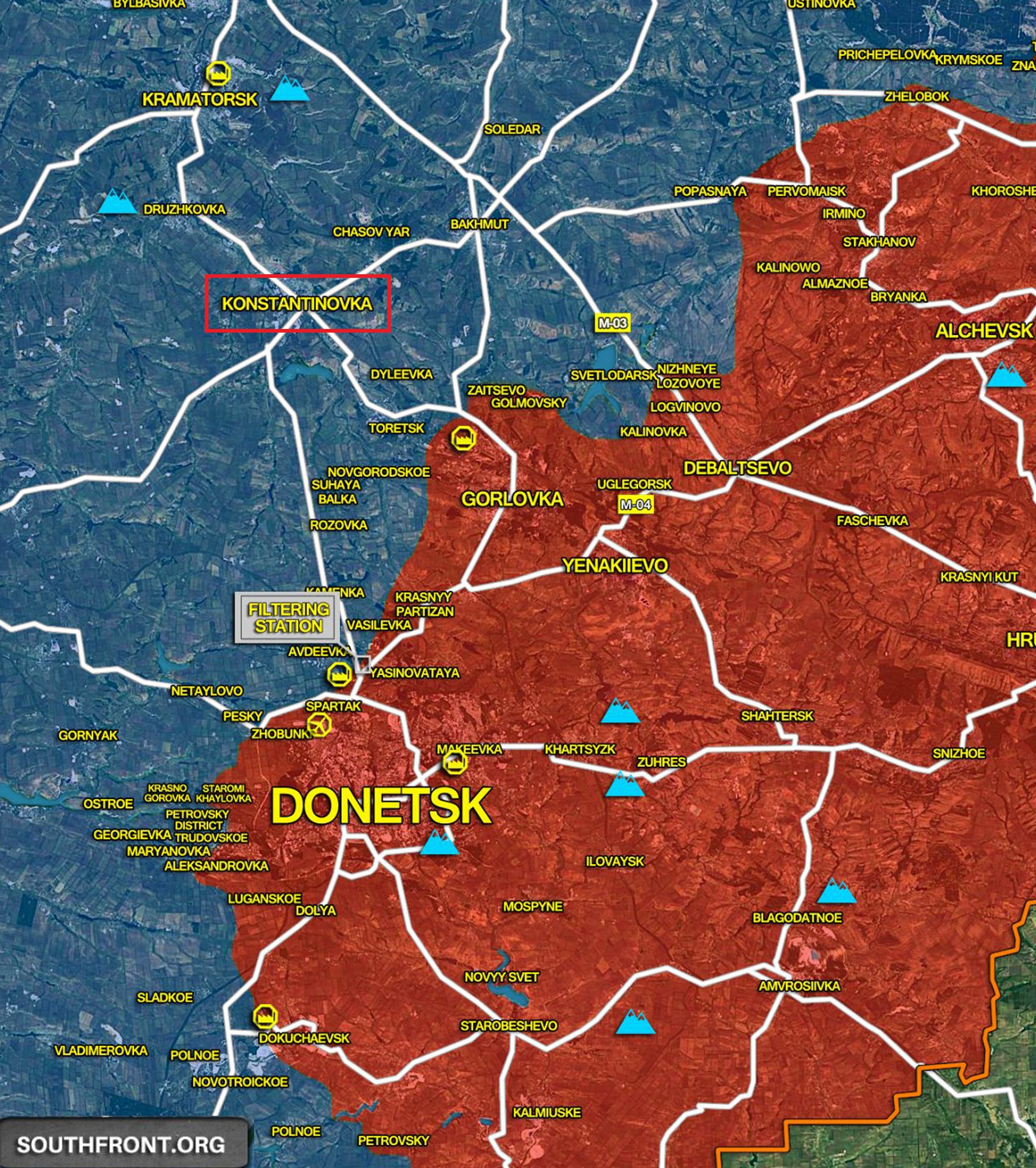 Recently, the numerous reports indicated that Ukraine was actively building up its military presence in the region. Over the past three nights, 6 trains with tanks and artillery systems passed through Konstantinovka village alone. Stocks of petroleum, oil and lubricants and ammunition loads are actively accumulating.

Ukraine is actively increasing stocks of oil, lubricants and ammunition loads, including through foreign imports. Fuel purchases from Belarus have reportedly increased over the past 3 months.

Apparently, Kiev is striving to fill the military fuel storage to the limit in anticipation of the launch of large-scale military operation.

All guilty of High Treason.

At least he is dead – sadly he “spawned” and this daughter (evil witch) is using a lot of energy (and some serious sponsors) to carry on his “benevolent” work.

Kosovo 2008… Cindy McCain (his wife) with human trafficker and heroine smuggler Hashim Thaci… Her father Jim Hensley, made his fortune through his connections to the Meyer Lansky Jéwish organized crime syndicate…

So much incompetence and cowardice can only be explained in one way, the instructors are from NATO, mainly Yankees and Canadians, this clarifies everything.

North Atlantic Terrorist Organization. . . . Let’s talk about the extrajudicial killing of . . . Muammar Gaddafi . . . and Jamal Khashoggi . . . who deserved what he got . . . Just because Khashoggi worked for the Washington Post, it gives him no special privilege on Saudi Arabian soil.

Saudi Arabia is a monarchy, and these types of killings are perfectly legal in a monarchy where the king is the ultimate judge, just ask the British monarchy, they did it for centuries, so did the Persian monarchy and the Islamic Republic of Iran.

Most of NATO are not monarchies, yet they are graced with the privilege to carry out such operations as the extrajudicial killing of . . . Muammar Gaddafi . . . for example, while those lowly barbaric Saudis are held to a more stringent standard?

Khashoggi committed treason against his king, he was a Saudi subject, allegedly killed on Saudi soil at their consulate . . . in Turkey . . . who is also a member of the North Atlantic Terrorist Organization. (The Turkish caliphate before it was no stranger to sex slaves and mass executions.)

Well the obvious answer to this sort of tactic is to strike pro-Nato terrorist Ukrainian positions that aren’t using human shields in retaliation at the same time using real-time intelligence.

While Strelkov was important early in the struggle to free Donbass, it will be best if he stay away!

Around 600000 people in donbass have received their russian passport now. In case of a new offensive from ukrainian forces if the local army is not enough Russia could get involved to protect Russian citizens there. Escalation becomes more and more likely. And that is extremely dangerous.

If a new high-intensity Donbas war occurs, I don’t see how Ukraine would not be further Balkanized and how Kiev would still be the capital of a unitary Ukrainian state. It would ultimately be yet another catastrophe for the Euro-Atlantic Alliance and yes a lot of U.S. misled Nato forces would be neutralized.

Well that is a fantasy map and always shall be.

Russia should get involved whether the local guys are enough or not,although they did a great job last time,things have changed now,the US is looking for a fight so i hope they get one,it will be the last if that fight is in Ukraine.

In time – all of novarussia will be a part of Russia

Till the Dnieper river Novo must go

Its all a gambti to try to start a conflict so Russia will have to help the Donbass, so this can then be used as an excuse to stop Nord stream 2.

Ukraine needs this conflict right now. The Europeans are losing patience with them, Kiev is running out of money and have devastating loans coming due, and Nord Stream 2 advances despite everything their patron throws at it. Volumes of gas transit and the cash Ukraine earns from it are already being reduced under contract. They now assume that a window of time to act is closing. If they can get Russia to intervene that might scuttle Nord Stream 2 and threaten a huge blowup in gas supplies from Russia to Europe, although Ukraine would likely also see it’s transit revenues fall to zero too, so not sure if they’ve thought it all the way through. They probably can’t think things through right now, because the political class in Ukraine are desperate. They are losing popular approval and perhaps they think this conflict can turn it all around. When they fail, and they will, they’ll lose nearly everything. No one inside the EU will be able to shield them from the fact that in addition to failing to meet their Minsk obligations they were the side who escalated the conflict, and lost it after causing more suffering, and more headaches for everyone.

Yeah, not sure what any of that means or what relevance it has to my comment which is about geopolitical moves regarding the conflict.

“The Jéwish doctrine of Marxism rejects the aristocratic principle of Nature and replaces the eternal privilege of power and strength with the mass of numbers and their dead weight. Thus it denies personal worth, contests the significance of folk and race, and thereby withdraws from mankind premise for its existence and culture.”—Mein Kampf

Still has nothing to do with my comment, or the situation in Ukraine, or D and L. Israel isn’t involved nearly at all, although Turkey and the USA are. And Ukraine is a significant anti-semitic state. Your highway of Jewish scarlet lettering doesn’t originate from any point I made, nor does it wind it’s way through the blowhard outerlands to any community of cogency related to understanding Ukraine’s moves right now, as they involve state strategy (not religious) regarding conflict between state actors, a lasting insurgency, and a collapsing nationalist political project inside the Ukraine.

I wonder how Viktor Yanukovych is doing these days, he should have stayed and fought it out like Gadaffi and Assad, could have been a hero, but I don’t blame him for chucking it in with the little Jew grub Hunter in the midst of the dealings, Viktor was too far gone, actually if Gadaffi hadn’t gone down the slippery slope and paid compensation for Pan Am 103 he would still be alive today, like Assad.

No worries about these Jew maggots getting away with anything, the Russian will send then back to Poland in body bags.