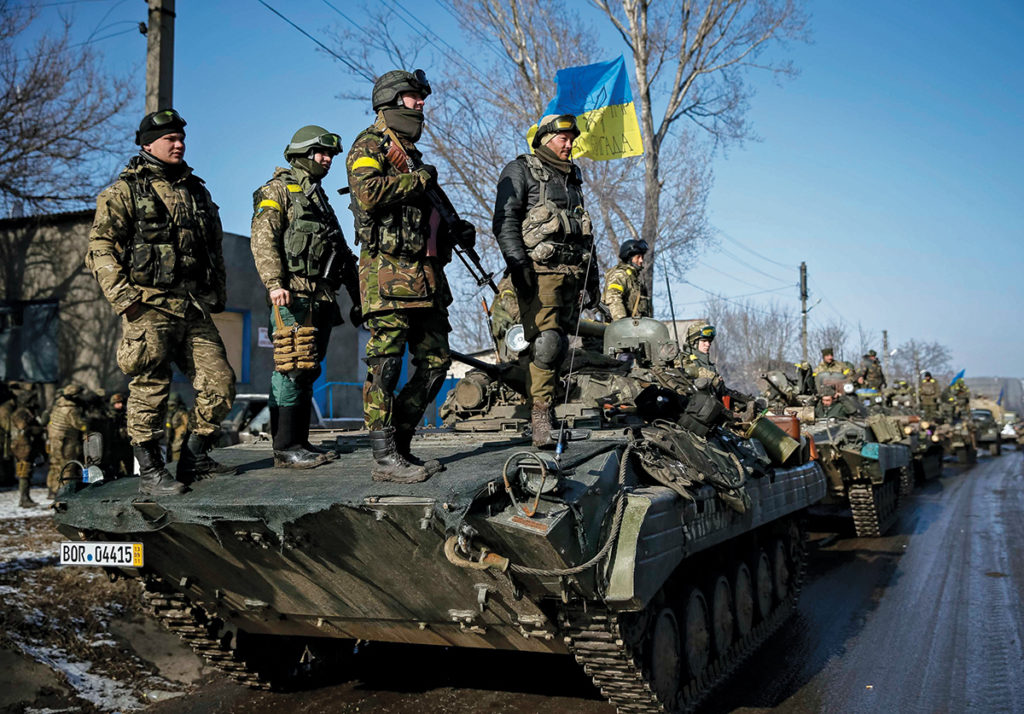 The US midterm elections are drawing closer it appears that the Ukrainian conflict shows promise of escalating once again.

“Some 39 combat brigades, a number of military units of operational, logistics and technical support have been formed. Groups of forces that are ready to repel aggression on potentially dangerous areas have been created, and not only from the east, but also from the Crimean direction. The troops should be kept ready, including from Transdniester and from the north,” Poroshenko said.

Furthermore, according to him an increase in the aviation fleet and the fleet of anti-aircraft missiles has also strengthened the country’s air defense.

In response, the State Council of the Republic of Crimea claimed that it was the Ukrainian authorities who tried to carry out sabotage in the Crimea.

“Well, what kind of 39 brigades are there? Anyone who is closely following the conflict on the territory associated with the Crimea, understands that all provocations come precisely from the Ukrainian side. It was they who covered the water, the railway communication,” the head of the State Duma Committee on CIS Affairs, Eurasian Integration and the Affairs of Compatriots Leonid Kalashnikov said in an interview with RT.

Despite the ceasefire in Eastern Ukraine, Petroshenko persists that the Ukrainian forces should use all their power and means in the Donbass region. According to Dmitry Abzalov, president of the Center for Strategic Communications “The election agenda in Ukraine is much more important than the Minsk agreements or any obligations to the EU. All this does not matter – thrown into the furnace of the election campaign. Statements by the President of Ukraine primarily focus on the political component.”

Furthermore, the US appears to be turning Ukraine into a proxy foothold against Russia, with large drills being held in Ukraine to defend its “airspace.”

Clear Sky 2018 in Western Ukraine kicked off on October 9th and it centers around air defense operations aimed at “protecting air space from Russian aggression.”

A US Air Force statement also said the aim of the exercise is “to enhance regional capabilities to secure air sovereignty and promote peace and security through cooperation.”

Poroshenko, during his announcement of the new brigades, said that he had just finished inspecting the Clear Sky 2018 multinational exercises.

“These are the largest exercises that we have had in the last four years. It has 50 aircraft from all NATO member countries and our Ukrainian air force. The purpose of the exercise is to increase the level of compatibility of our combat aviation with the air forces of the United States of America,” he claimed.

As reported by Zero Hedge, Kiev officials constantly overestimate the threat of a Russian military invasion following the 2014 events in Crimea and have even “suggested the possibility of a World War 3 scenario between the West and Russia centered over Ukrainian territory.”

On September 27th, Ukraine also received two free old cutters from the US Navy. This happened during Ukrainian President Poroshenko’s visit to the US Coast Guard Base in the city of Baltimore. Despite receiving them free, Ukraine will have to pay $10 million for renovations of the vessels in Baltimore, where they will remain until fall of 2019.

During the visit Poroshenko and senior US officials praised Ukraine’s accelerated moves at “inter-operability” to make its forces, equipment and methods compatible with those of NATO. The Ukrainian president said his country was already “effectively NATO’s eastern flank.”

Poroshenko also thanked Washington for being Ukraine’s largest source of military aid. That, with help from the UK, Canada, Estonia, Latvia, Poland and others had enabled Kyiv to build up a strong army “which is effectively stopping Russian aggression, which is fighting for freedom and democracy and, actually is fulfilling the function of being the eastern flank of NATO.”

Other future Seabee projects in Ochakiv include a US naval facility and entry control points with perimeter fencing.

“These projects have been in waiting for many years and to see them come to fruition is a major accomplishment for Seabees, and who better to lead the way than ‘the first and finest,” said Lt. j.g. Jason McGee, officer in charge of Det. Ukraine.

The US furthermore invests a lot on Ukrainian “intelligence improvement.” Meaning that the CIA has a lot of influence on the country’s intelligence office.

On July 20th, the US announced an increase in military aid to Ukraine by $200 to help fight “future territorial aggression.” Since 2014, the US has provided total military aid of $1 billion to Ukraine.

Earlier than that, on April 30th, Ukraine received Javelin anti-tank missiles from the US. This was part of a $47 million aid package consisting of 210 Javelin missiles and 37 Javelin command units. This also included military trainers and the missiles came from US army stock, so more than likely, Ukraine was provided with old hardware which the US would not utilize.

With the US mid-term elections upcoming, it is necessary for the Trump and his aides to present power and show that they can place the “escalation” between Ukraine and Russia under control. It would not be surprising for there to be an incident similar to the assassination of Zakharchenko to cause tensions in Eastern Ukraine to grow despite the ceasefire.

The “Russian aggression” narrative is a valuable internal policy tool in the US, it provides justification for the US to fuel its military industry complex and show force against a mostly speculative threat. It is no secret that US candidates use the conflicts around the world the country takes part in as a sort of “bargaining chip” to secure a larger portion of the vote.

New Global economy Crisis is looming and US need scapegoat to blame. Putin did it ! China did it !

Don’t dare to point at Rothschild’s & Soros’s Deep State, banks too big to fail, FED, IMF, Wall Street, Bildeberg and Illuminati. They are innocent or don’t exists at all. (sarcasm)

Kiev is run by a Jewish junta. Simple as that. Jews, many of who are Khazar have a long bloodlust for Slavic Russian Orthodox.

They are the ones behind U.S. policy vis a vis U.S. towards Russia. All the hostility. And Israel is heavily involved training the Ukrainian army, and supplying the with arms. Just like they did in Georgia in 2008.

Jews hate Russians, and want Russia as theirs. They dream of their old ancient Kingdom of Khazaria, that was utterly defeated by the Muslim Mongol Golden Horde and the Mongols returned the lands to their proper owners, the Slavic Russian princes known as the Muskovites.

And Jews want Russia for her material resources which dwarf any other nations. They descended on a weak Russia in the 1990’s, plundered much, but Putin came in and put a stop to that.

Its the Jews. As simple as that. ,

Indeed, IDF snipers were responsible for the massacre at Maidan in Kiev. Jew parasites have infected Ukraine and Russia. At least in Russia the military is resisting Jew plots as the downing of IL-20 in Syria showed. Russia needs to respond forcefully in Ukraine and support the pro-Russian forces.

Ukraine army is a fake army….they are unable to retake Donbass vs farmers&miners army…so if Russia invade all Azov coast to Crimea…it would be the same scenario as Crimea.

The 2 things Ukraine and it’s overlord should consider is that Putin has stated that Russia will not allow Ukraine to use the people of the DPR & LPR for a shooting gallery and also, that Crimea is Russian land. For those dimwitted proxy force Ukrainians, the translation is simple, if you expect a long life expectancy, don’t listen to your colonial master.

Right now they want to provoke Russia into open conflict as an excuse to force Germany to back out of Nord Stream 2, to block it permanently and open up a market for USSA LNG. Once Nord stream 2 is done by late 2019 Russia will move in Ukraine, Syria and Afghanistan against the racist supremacist global Jewish confederate slave empire dictatorship. It’s a smart strategy by Russia just be patient and win in every area possible.

The war winds down in Syria, so the US moves to start another war. The USA is war, and war is the USA, like vampires without blood they will die.

Syrian war will continue as US and Zionists want to create a quasi state in Euphrates and Idlib. Russia will have to support an inevitable Syrian and Iranian assault to liberate all of Syria. Turkey is playing a double game as usual.

True, America is like herpes, you can never get rid of them, but sometimes you can go into remission.

Ukraine is an eternal part of Russia and should come back in mother Russia’s lap. Putin should have acted more decisively when the Don Bas nationalists were on the verge of liberating all of Ukraine. Now the US and NATO hyenas are trying to turn Ukraine into another launch pad against Russia like they have done in Kosovo with the Balkanization of ex-Yugoslavia.

If Ukraine attacks, their army and their statehood should be destroyed and Ukraine should be taken back to Russian federation under the name of Novorossia or Malorossia in order to prevent future nazification and possible use of Ukraine in an slavic killing slavic war organized by the west.

The peaceful & fair solution for Ukraine is to split the country along its natural border the Denieper river. Those to the east can have an election and decide what they want to do.

ukraine never was a nation by its own….what we have here is them satanic jews taking over a fairty tale nation, plundering it, backing the “nazi” movement and stinging the great bear……jews have done that before already…in germany in the 20´s and 30´s by backing the NSDAP and hitler there… NAZI was not a german name….its the jew name for their partnership with the NSDAP hence NAZI NAtional ZIonism……the deal between ZIONISM and the NSDAP(hitlers party)

Where can I find some historical fact that hasn’t been erased/whitewashedd?