A Colonel of the Ukrainian Security Service (SBU), who served as the counterintelligence chief, has been killed in the central neighborhood of Mariupol. 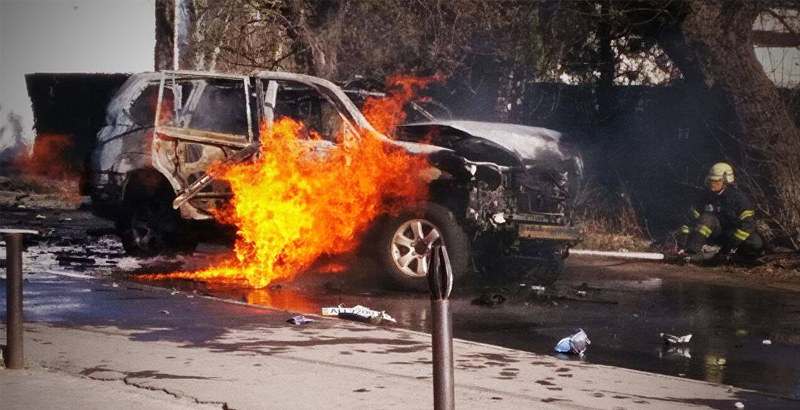 On Friday, a car has exploded in the Kiev-controlled city of Mariupol, killing Colonel of the Ukrainian Security Service (SBU) Alexander Kharabyush, the RIA Novosti news agency reported, citing a statement of SBU head Vasily Hrytsak.

The head of the special service noted that Kharabyush, who served as the counterintelligence chief of the SBU regional administration in Donetsk region, had a wife and two children. Hrytsak assured that those guilty of the killing would be punished.

This SBU division in the Donbass is one of the most odious in terms of the used methods. As it was earlier reported, they made tortures a usual method of intimidating and extracting information from detained citizens or captured fighters of the self-proclaimed Donetsk People’s Republic (DPR).

In his turn, head of the police department of the Donetsk region, Vyacheslav Abroskin, wrote on his Facebook page that the explosion occurred at the intersection of Metallurgists Avenue and Kaffaiskaya Street in the central neighborhood of Mariupol at 8:35 am local time. He did not mention the killed person’s name and only noted that it was a law enforcement officer. At the same time, Abroskin said that one of the incident’s versions was a terrorist attack, and accused the DPR government of the killing.

As the Unian news agency reported, citing Ukrainian Attorney General Yuriy Lutsenko, Kharabyush lost both his legs in the explosion and died of blood loss in an ambulance car.

According to RIA Novosti, an operational-investigations group of police and SBU operativists, headed by the head of the Chief Directorate, as well as an emergency response group, are operating at the site of the incident. The area is cordoned off.

The colonel’s killing is the last in a series of high-profile murders in Ukraine. On March 23, a former deputy of the Russian State Duma, Denis Voronenkov, was killed in the center of Kiev. A bodyguard of the ex-deputy wounded his murderer during the shooting, later, the attacker died in a hospital. In July 2016, journalist Pavel Sheremet, who spent about ten years, working on Russian television, and had been living in the Ukrainian capital for the last five years, was killed in a car explosion in Kiev. A criminal case was initiated under the ‘Intentional Homicide’ article, the police have not yet named the names of suspects.

Karma, for Givi and Motorola?

Karma indeed. We need a lot more in Banderistan Ukraine. :)

Tit for tat or false flag?

They don’t have enough brain power to come up with the false flag. Look what they did to their own country lol

The junta’s foreign controllers have plenty of experience in false flags and suiciding any from the side they run who begins to get morals or gets to be a loose end. I agree the swine in kiev posing as government doesn’t have the skills but there’s been plenty of time for gladio style operatives to have been imported and be ready to be used as their handlers see fit.

Tit for tat !? , poor poeple in mariopul the SBU is of course going to try even harder to make good ukrainians out of the locals !

What goes around comes around.Time to pay for Ukronazis.