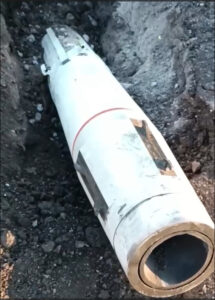 The Ukrainian military continues shelling on civilians in the regions it lost. Since the early morning on December 4, Ukrainian shells have been hitting settlements in the Donetsk and Luhansk People’s Republics. The attacks still continue but have already resulted in victims among the civilians.

The Ukrainian military is now shelling the capital of the Donetsk People’s Republic. So far, at least two  districts of Donetsk have come under fire. These are the Kuibyshevsky and Kievsky regions.

Unexploded HARM missile in the Kirovsky district of Donetsk:

The victims include a girl abd her mother.  The girl was provided fith the first aid on the spot, while her mother was taken into a hospital by volunteers wha were distributing humanitarian aid in the area.

The local authorities continue to collect information about the victims and destruction.

Earlier on December 4, the Armed Forces of Ukraine shelled the Novoluganskoye settlement of the Artemovsky district. As a result of the attack, a 37-year-old man was wounded, a school and a boiler room were damaged.

Over the past day , the DPR Representative Office reported about 31 facts of firing by the AFU with 143 units of various ammunition. 10 settlement were shelled AGM-88 HARM missiles and artillery of various kilber.

Over the past day, four more civilians were wounded in the Kuibyshev district in Donetsk, Nikitovsky district in Gorlovka and the previously liberated Volnovakha and Nikolsky. 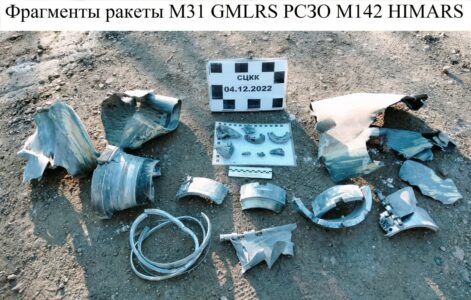 On December 4, in the Luhansk People’s Republic, the AFU fired missiles from the HIMARS MLRS at civilian facilities in Alchevsk. In total, 4 rockets were fired by Ukrainian militants. The building of the technical school and the dormitory were damaged.

Over the past day, the armed formations of Ukraine shelled the village of Novochernovoe with the US-made MLRS M142 HIMARS, firing 2 missiles. As a result of the shelling, 2 employees of the “Dorinvest” were injured and the residential facilities of the enterprise were damaged.

Civilians targets should simply not being targeted: either from Ukraine or from Russia! Sadly both sides do it and did it. Just look at Bakhmut, Severodonetsk, Mariupol…

North Koreans won against the US back in the 50ies
Reply to  Santa is coming...

Russia is not interested in civilian targets because it has no military value. Ammo is expensive, it should be used wisely – against military targets. The Nazis on the other hand (with their endless US made ammo) are daily bombing civilians in Donbass since 2014, and this is a fact.

Cromwell
Reply to  Santa is coming...

But this has been a policy of the Ukrainians since 2014,the bastards have targeted Cities like Donetsk,civilians were the targets to terrorise the population.

13:00 CET. Air raid sirens are sounding in the Dnepropetrovsk, Poltava and Kharkov regions as well as in parts of the Russian region of Zaporozhye, which is now temporally controlled by the nationalist Kiev regime

EU must not be USA slave
Reply to  Peter L.

Those in power in Kiev are not nationalists, they are nazys and must share the same fate with all nazy crackheads.

Clyde
Reply to  EU must not be USA slave

Those in Kiev are not in power. They are placeholders installed to manage a project of the US Military-Industrial-Intelligence Complex. Unfortunately the so-called “Ukrainians” are part of a kooky death-cult that bears every single hallmark of Robert Lifton’s description of a “totalist” group. The notion of a creature like Krusty the Klown of Kiev being a “nationalist” is silly. The Ukretard “leadership” was going to cut a deal back in April, and it was scuppered by the Five Eyes lackey, Johnson. The whole conflict is a US tactic in it’s strategy of “extending” Russia, so the notion that a show-biz creation like Krusty calls the shots is simply not consistent with observable reality.

To the misfortune of humanity NATO has projected it’s doctrine of “total war” here in Ukraine.

EU must not be USA slave
Reply to  Alto

Strike the Nato & US command centres in Ukraine!!

Yes, striking all NATO assets in Ukie land should now be a priority, including the weaponised US/UK embassies in Ukraine.

These are in poland and romania. The us boys never go into the warzone. They just play video gamas over satelites with their lokal cannonfodder.

I really doubt Putin would do a Hitler and fight 2 wars when their getting ass blasted in the first war he started.

Maybe adjust the settings on your television. This conflict started when the US overthrew the government in 2014, and since that time the Ukrainians lost Crimea and vast sections of five oblasts. All fighting since the US escalation has occurred on the territory of the failed Ukrainian CIA project. It’s Russian winning all the way if we’re pretending it’s a Ukrainian-Russian affair.

nobody interested in moron americannot impotent doubts except taliban

The armed forces of the failed Ukrainian CIA project have been massacring civilians with artillery since 2014. It is openly advocated by many, many Ukretards to use any means necessary to force the population in Donbas and other regions that rejected the Kooky Koup of Kiev, to leave. The derp is strong in all Ukretard trolls.

If the Ukrainians were paying for their ammo, they wouldn’t waste it on civilians.

Most likely it’s Russian army killing innocent civilians. You have never cared about your army committing war crimes. Same shit as bolsheviks did.

Russia will prepare a new storm on Donbass if they do it again.