The military intelligence of the Donetsk People’s Republic has reported that the Ukrainian Army is going to launch a new offensive in the direction of Donetsk. 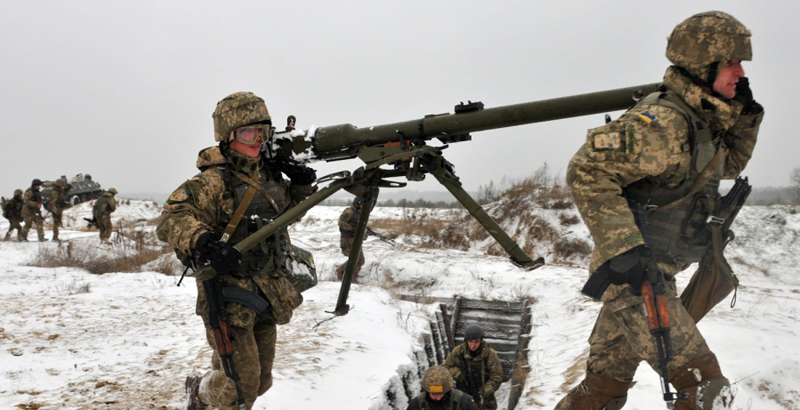 Ukrainian soldiers carry a recoilless rifle during a training exercise led by troops from the 2nd Infantry Brigade Combat Team, 3rd Infantry Division, in November 2016 at a range near Yavoriv, Ukraine (Photo: US Army / Elizabeth Tarr)

According to last reports from the Donbass, the Ukrainian Army is building up forces in the direction of Donetsk. The military intelligence of the Donetsk People’s Republic (DPR) obtained information about intentions of the Ukrainian forces to launch an offensive in the area, located between Donetsk and Gorlovka in the coming days in order to take full control of a highway, connecting these cities of the republic, and cut off Gorlovka from connection with Donetsk by the shortest route.

Spokesman for the Ukrainian Armed Forces, Dmitry Tymchuk, called these reports of the DPR intelligence “rumors.”

“Citing operational data of the “military intelligence,” staff structures of units of the 1st DPR army corps are distributing information that in the period from February 17 to February 19, units of the Ukrainian Armed Forces become active at the Donetsk direction. According to this information, the Ukrainian Armed Forces allegedly plan to carry out large-scale actions on the main forward positions of the occupiers that should allow the Ukrainian Army to get full control over a part of the Donetsk-Gorlovka road,” Tymchuk wrote on his Facebook.

At the same time, according to him, representatives of the enemy (the DPR People’s Militia) “have reduced the intensity of shelling in the area of Avdeyevka due to lack of ammunition.”

If to analyze the Tymchuk’s statements, it is quite understandable why Ukrainian troops have a ‘desire’ to start a new provocation in the Donetsk direction: the Ukrainian Armed Forces believe that they have a possibility not to meet resistance and take the highway under their full control.

Ukraine had chance to end the rebellion in 2014 and they failed.Since 2014 Poroshenko goverment havent been able to do a lot there.Well they lost one big battle 2 years ago – Debaltseve I think it was.

NATO has just been conducting exercises with non-NATO Ukraine and no doubt left many personnel and weapons behind. Why did the UK send the Type 42 Destroyer, with 60 marines and SBS Forces on board, and Fallon the UK Defence Minister say about helping the 650 covert UK special forces in Ukraine?

Hasn’t Russia got plenty of evidence, in the many white books, including Ukraine using balistic missiles against civilians in Eastern Ukraine? Isn’t she taking copies of the evidence to the UN, in protest? UN – Saudi heading the Human Rights Committee, ironic, but, no doubt the UN will try and ignore it. However, can they also ignore the fact that Russia has stated in various treaties that they will do whatever, to protect the people of Russian origin, wherever, they may be?

‘…The CIS Treaty language reads as follows: “The high contracting parties recognize and respect one another’s territorial integrity and the inviolability of existing borders within the commonwealth.” This made Russia’s recognition of Ukraine’s borders conditional upon Ukraine’s full membership in the CIS . Promulgated in 1991, it was the best guarantee of independence that Ukraine has received from Russia…’ http://www.odkb.gov.ru/start/index_aengl.htm

Plus the fact that Ukraine and Russia have never, ratified their borders, in accordance with international law, which even Ban Ki Moon has acknowledged.

‘…Where this becomes a problem is that, according to a statement from UN Secretary General Ban ki-Moon, Ukraine is missing borders.

Experts operating under the aegis of the UN Security Council came to the following conclusion about Ukraine’s borders: Within the framework of international law , it turns out that, since the collapse of the Soviet Union, Ukraine has not been properly registered as a state, according to the UN demarcation of its borders. According to the accepted contractual framework of the Russian Commonwealth, or Commonwealth of Independent States (CIS), the country remains on the limits of the administrative boundaries of the USSR, over which the UN has no legal jurisdiction. The EU currently backs this position. The only established borders are on the European side…’ https://www.opednews.com/populum/page.php?f=Ukraine-without-Borders-S-by-George-Eliason-Cultural-Genocide_Genocide_Genocide_Hate-Groups-Neo-Nazis-140415-286.html

Is the U.S. going to sanction Ban ki-Moon? Will they drone the UN?

This is where it states that Russia and Ukraine have never ratified their borders and why:

The borders were never ratified with Russia. Yeltsin allegedly was ill and could not get around to signing and Ukraine did not want to sign. If you look at the Conclusion of the 1997 Russia Ukraine Friendship Treaty (I believe it is found on page 62) it covers that fact. Even Ban Ki Moon, on a current affairs programme, admitted that. Ukraine has not ratified the borders in accordance with international law.

In 23 years of the Ukrainian state leaders have not found time to record the official demarcation of borders, as per the UN Secretary General Ban Ki Moon.

The Security Council of the UN examining the problem with Ukrainian experts and have come to that conclusion under international law : it turns out that since the time of the dissolution of the USSR , Ukraine was never formalized and properly registered at the UN. Neither were its borders as a state. Include administrative district borders of the USSR and the agreement creating the CIS, on which the UN has no legal force.

Basically, Ukraine does not exist as a country! The Constitution of Ukraine State territory is not specified, and nothing is said about the borders.

This means that Ukraine has no official border specified in international law , so it may be difficult to talk about his offence by someone. Similarly, there is also no legal aspects to talk about separatism, or violent change of borders settings.

May sound sick and wrong…but according to the secretary general of the UN. You can not change what does not exist!…’ http://www.mbctimes.com/englis…

As late as March 1 997, experts in Russian-Ukrainian relations predicted no resolution to the problems that confronted these two states. In the long term, it was thought that both parties might sign a Treaty on Friendship, Cooperation and Partnership.

However, in the short term, eight factors seem to explain why Russia was incapable of signing the Friendship Treaty.

•First, without border recognition in a treaty, NATO could not invite Ukraine to join as a member during the Madrid Summit in July 1997.

•Second, Boris Yeltsin’s health prevented him from traveling to Ukraine to sign the treaty, especially before the NATO conference in July 1997.

•Third, if Moscow had really wanted to sign the treaty, it would have separated the Black Sea Fleet and Sevastopol issues from the treaty and continued negotiations in search of a suitable solution.

•Fourth, Prime Minister Viktor Chernomyrdin’s political party, Our Home is Russia, regularly supported the State Duma’s and Federation Council’s claims on Ukrainian territory, principally claiming Sevastopol as a Russian city. This suggested that the issue had moved to the center of Russian policy from the fringes.

•Fifth, the Russian leadership did not denounce or criticize Mayor Luzhkov when he traveled to Sevastopol against Ukraine’s wishes.

•Sixth, Russians did not recognize Ukraine as a distinct ethnic group; from their perspective, Ukraine should follow Belarus’ s example for establishing close ties with Moscow.

•Seventh, the recognition of Ukraine’s borders would have further promoted national unity. This might have allowed Ukraine to distance itself from a close relationship with Russia, which would not have been in Moscow’s best interests.

•Eighth, Russia had not agreed to demarcate any borders with any of the CIS states because Russia argued that “the CIS borders should be divided into ‘transparent internal’ and ‘jointly guarded external’ borders.” 120

All of these factors led the experts to underestimate the impact NATO enlargement would have on Russia’s decision-making.

The Friendship Treaty and Black Sea Fleet negotiations continued for nearly six years almost without interruption. From late 1996, negotiations for a solution became more intense. However, disagreements over the fleet’s basing rights, the division of bays at Sevastopol and mutual financial settlements were great stumbling blocks to a resolution.

The Black Sea Fleet problem and the absence of a treaty considerably complicated the state of Russian-Ukrainian relations. The threat of pushing Ukraine into NATO’s orbit, if not its enlarging web of membership, became a direct influence on accelerating the search for solutions.

Ukraine realized that it had to accept a deal as long as it did not appear that the government had surrendered its territorial sovereignty or violated the constitution. 121 Kiev stood strong in its desire for independence and sought assurances from the international community. Ukraine played the “NATO Trump Card.” It continued leaning

120 Taras Kuzio, “Eight Reasons Why Ukraine and Russia Will Not Sign Any Inter-State Treaty,” 24