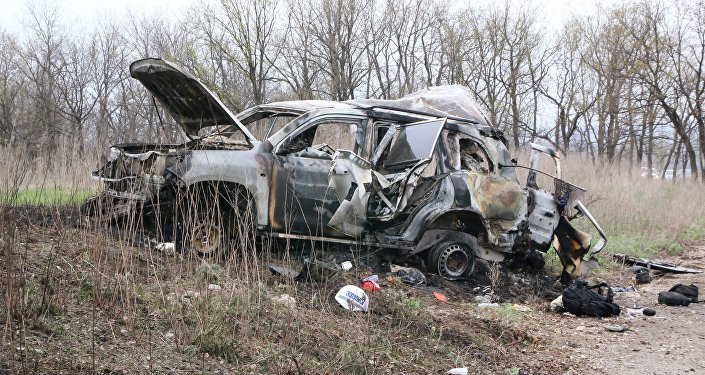 The Ukrainian army continues to increase its activity in the east of the country in the combat zone between the Ukrainian armed forces and the Luhansk People’s Republic’s units. Thus, in the morning of April 23 a patrol vehicle of the OSCE Special Monitoring Mission (SMM) blew up on a mine in not controlled by Kiev Slavyanoserbsky district of the Lugansk region. As a result of the explosion, a US citizen working as a medical officer of the mission was killed and two mission employees were injured.

Being unable to conduct active armed actions, Kiev focused its efforts on asymmetric combat operations against the Donbass insurgents through sabotage actions.

A.Marochko, an official representative of the People’s Militia of the Luhansk People’s Republic, said that the undermining of the cars of the OSCE mission is a terrorist act of Ukrainian special services that was committed by saboteurs of the 8th Special Regiment of Special Forces of the Special Operations Forces of the Ukrainian Armed Forces. The possibility of execution of such terroristic acts was previously officially announced by the Minister of State Security of the Luhansk People’s Republic L. Pasechnik.

On February 4, 2017, he noted that the the People’s Militia of the Luhansk People’s Republic had information concerning the Ukrainian special services attempts to assassinate international mission personnel working in the Luhansk People’s Republic. S. Ivanchuk and I. Deyev, servicemen of the 8th Special Purpose Regiment of the Special Operations Forces of the Ukranian Armed Forces arrested in February being interrogated confirmed the fact that the Ukrainian Special Forces had the representatives of the OSCE shadowed. Major Ivanchuk, the head of the Ukrainian Group of Diversions and Reconnaissance confirmed during the interrogation that he had shadowed the movements of the OSCE staff and then had passed this information to the Ukrainian Security Service. He also admitted that the corresponding task was assigned to him by Colonel Sandursky known by the call sign “Khutor”, his curator from the Security Service.

In the course of the engineering reconnaissance of the area conducted on April 24, 2017 by the units of the People’s Militia of the Luhansk People’s Republic at the zone of the diversion aimed at the crew of the OSCE, a so-called “lying place” organized by the Ukrainian Group of Diversions and Reconnaissance was identified at a distance of 500-700 meters from the indicated location. Based on the evidences found and the nature of the actions it was established that the group consisted of three people. The senior serviceman of the group was Major Goluzyak Sergey Vyacheslavovich from the 8th separate special regiment of the Special Operations Forces of the Ukrainian Armed Forces.

It is noteworthy that at present units of the Ukrainian Armed Forces are being trained by military instructors from Poland, Lithuania and Denmark at the Yavoriv training ground in the Lviv region. The training of the Armed Forces is led by Colonel David Jordan of the US Armed Forces, who may become the head of the “OSCE peacekeeping mission” in the Donbass region.

Undermining of the OSCE vehicle is another attempt to disrupt the Minsk settling process within the South-East of Ukraine which goal is to create preconditions for the unarmed OSCE troops entry to the territory of the unrecognized republics. The question is who from the Ukrainian governance will be able to provide guarantees for their security?

The Donbass protection units had better learn to go as asymmetric combat operations against Zionist-led-Ukraine as well. Take out their power plants, science institutions and aviation radars and fast. Bring the Zio-state to a grinding halt. This is how things are accomplished. This side that can adapt quickly wins, the other side looses everything just as quick. http://ihr.org/

Putin is repeating the same mistakes Slobodan Milosevic did in Balkans with far reaching consequences. Minsk peace agreement is an equivalent to Dayton Agreement. OSCE has played the same role then as it is playing today in East Ukraine. There is no unknown in this equation and yet RU leadership keeps on making the same mistakes. It’s not going to be a happy end for RU sovereignty and its military power and whom are they gonna blame for that?

Just kill the russian uncover operators and traitors of Ukraine. All of them terrorist in the pay of Putin.

Blow you daddy…. and your boyfriend from Azow ss and other nazi terrorists from Kiev. Go join them and die soon, instead of spamming moronic bs here you dumb pile of sh*t. You wont be missed.

You would know about bitches. Your daughters?

283 passengers of MH17 agree with you

A lot of their parents, children and family agree too.

Hy Dutch, like many U bike but U forgot to put the saddle.

So vicious are they. No honnor, only the same goal: messing ctizens all around the world.

Somebody did an outstanding job on the recent ammo dump explosion. A nice, clean irrefutably legitimate target with no major casualties – one granny struck by debris – God rest her. The Ukraine could use more such operations.

Or maybe this was another self-inflicted wound? In which case: Slava EUkrainie!