The Ukrainian Armed Forces have dispatched 28 pontoons to Luhansk region in order to leap the Seversky Donets River. 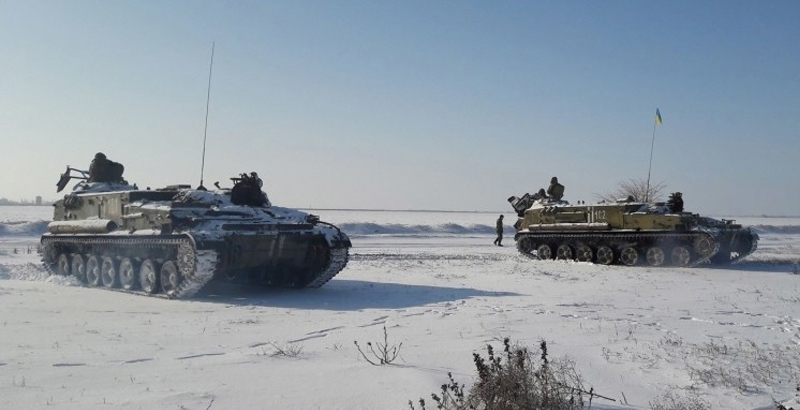 The fact of the dispatch of 28 pontoons to Luhansk region by the Ukrainian Armed Forces indicates offensive ambitions of Kiev and its plans to cross the Seversky Donets River, the RIA Novosti news agency reported, citing a military-diplomatic source in Moscow.

The Seversky Donets River separates the zone, controlled by the Kiev authorities in Luhansk region, and the territory of the Luhansk People’s Republic (LPR) in the vicinity of Luhansk.

“The fact of the dispatch of 28 pontoons to Stanichno-Luhansk area of Luhansk region indicates plans of the Command of the Anti-Terrorist Operation to leap the Seversky Donets River and offensive ambitions of the Ukrainian leadership. And this is just self-explanatory and how many facts are still hidden,” the news agency’s source told.

According to the source, this clearly shows “who is actually preparing a provocation and is guilty of the escalation of tensions in the region.”

In late January, militias and Ukrainian servicemen reported on aggravation of the situation in the Donbass. The conflict’s sides accuse each other of increasing of the intensity of shelling, as well as of attempts to attack the contact line in the area of Donetsk. The Ukrainian authorities declared a state of emergency in Avdeyevka, located in the suburbs of Donetsk and controlled by the Ukrainian Army. Residents of Avdeyevka lived almost a week without electricity, while heat and water supply were intermittent in the town. According to the Organization for Security and Co-operation in Europe (OSCE), a difficult situation also occurred in Yasinovataya, located near Donetsk and controlled by the People’s militia. Representatives of the self-proclaimed Donetsk People’s Republic (DPR) said that it was the first time in almost two years, when Donetsk underwent a massive shelling from the Grad and the Uragan multiple rocket launcher systems.

At the same time, the Ukrainian Defense Ministry said that “meter by meter, step by step, having a possibility, our guys have heroically moved forward.” Press secretary of the Russian President, Dmitry Peskov called this statement a de facto confirmation of the fact that the Ukrainian Armed Forces are conducting offensive actions, which undermine the regime of the Minsk agreements.

What is interesting is the fact that the UK, has happily admitted to sending a Type 45 Destroyer to the Black Sea. On board, according to our Defence Minister Fallon, are 60 marines and Special Boat Service Forces. Now what do they specialise in? Together, with the fact Fallon has also stated that the ship has been sent to support the 65 covert special forces, operating in Ukraine.

What is the current NATO exercise all about and who is antagonising who and who is supporting who?

My advise to the democratic forces of Ukraine: give “Imperial Putin” a slice of the east to see if his blood thirst is satisfied (but i doubt it, he just loves to invade, bombard, kill)

Truth Be Told
Reply to  aurelius

Russia didnt invaide Ukraine ….. thats just fake news…. The people of the Donbass area want their freedom from the new Ukraine gov that treats them like crap. Their own people are fighting using old left over russian equipment that was left behind from the cold war …. https://www.youtube.com/watch?v=D-Jme77Dfc4

Athassino
Reply to  Truth Be Told

If Russia had invaded, there would be no Ukraine now.

You meant to say that the rebels were supplied with equipment and the pathetic ukrainian army got crushed.

You really have no idea, do you?