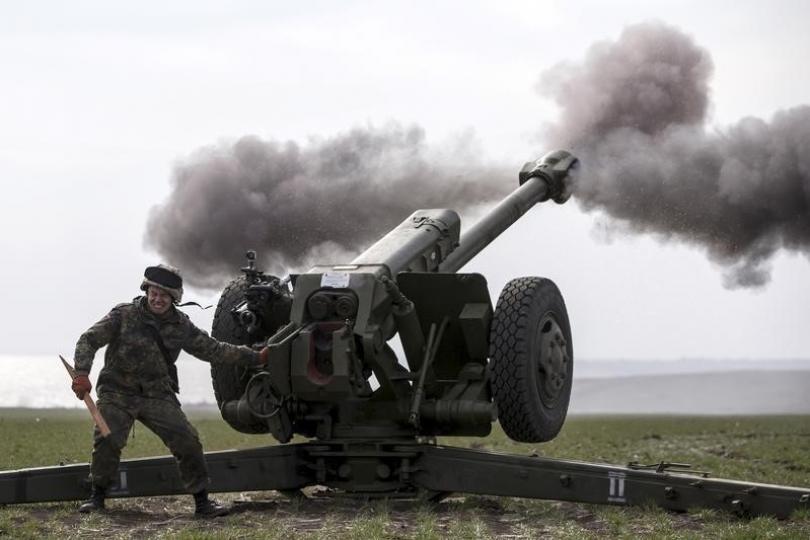 The Armed Forces of Ukraine reactivated in Donetsk by opening fire at Donetsk People’s Republic (DPR) army positions and towns near the front on November 5, according to Anna-news. Two children and one adult were injured, one child killed. A high number of civilians was evacuated.

82mm and 120mm mortars, 122mm and 152mm howitzers, and BM-21 Grad multiple rocket launchers are reported to have been used.  “2126 shots have been fired by Armed Forces of Ukraine at Donetsk People’s Republic in 24 hours,” DPR representative in the Joint Control and Coordination Center, Ruslan Yakubov, said.

DPR forces have retaliated, destroying two howitzer batteries, according to DPR leader Alexander Zakharchenko. He also added that Ukraine may have attacked because of a possible meeting between Russian President Vladimir Putin and US President Donald Trump at the Asia-Pacific Economic Cooperation summit in Vietnam this week.

The north of Donetsk and 22 towns near the front were caught in the fire. Eight houses and a car were damaged. Donetsk water purification installation was also damaged due to the attack. One adult was injured. Three children were heavily injured while playing in the playground, with one dying in a hospital. Thousands of civilians were evacuated from Donetsk.

DPR’s command stated that the reason for escalation in Donbass is possibly connected with Ukrainian forces trying to cover up the real reason behind the Opitniy munition depots explosions, reported to have happened on the day of the attack, according to DPR’s operative commander deputy Eduard Basurin.

“We do not rule out the escalation may be due to an attempt of the Ukrainian forces to conceal the real reason behind the Opitniy munition depots going up in flames, which are the overloading the depots with ammo, poor storage conditions of explosives and violations of the storage norms,” Basurin said.

Ukrainian forces allegedly tried to provoke return fire, so that it can be blamed for “their own mistakes resulting in them losing their ammunition near Opitniy,” he said.

A vice admiral of Ukrainian Naval Forces Igor Voronchenko has established a new award named the Iron Cross. It is dedicated to 25th anniversary of the Ukrainian Navy. The weird thing is that the medal is reported to has been “made out of the weaponry that our enemies used in battle against [Ukrainian] navy forces,” and the report did not elaborate which battles exactly “provided” the weaponry in question. 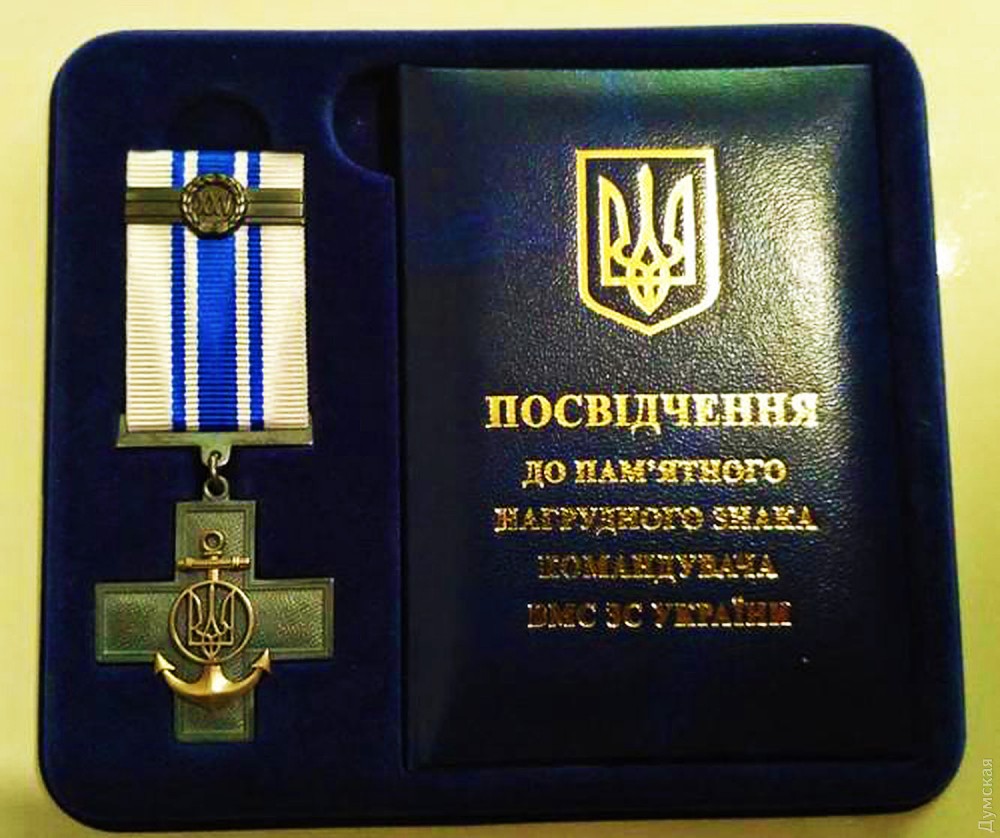 The Ukranian puppets would not have done anything like this without the agreement of their US/Israeli masters who are in a frantic hysteria , rather like spoilt children with guns, who have not got their way.

I can almost feel the building up of something very big and very bad; we must not get distracted from the bigger picture.

The sideshow would be this and NK. Iran, Syria and Iraq would be swept simultaneously though this time i hope Erdogan smart enough to understand where they standing best since Kurd would be mobilized as one of the main forces. Now regarding KSA it’s now depending on Iran capability to defend themselves. Iraq and Syrian opposition are best to pick the right side to ally.

I’m still waiting about the news on Venezuela.

The news on Venezuela? What about it?

Indeed the build up for WW3 by the US/Israel is in the wind.

Yeah, like many western leaders Porochenko is just a CIA puppet. In case some people didn’t know about, here is a video featuring Porochenko and US senators (and neocons) John McCain & Lindsey Graham. Taken at Kiev, circa 2 Janvier 2017 [at 1″10″] https://www.youtube.com/watch?v=5Eds-8P0VfA&feature=youtu.be&t=1m10s

— And here is my transcript … Therefore, it’s not hard to see what’s coming : Lindsey Graham – « I admire the fact that you will fight for your homeland. Your fight is our fight. 2017 will be the year of offense. All of us will go back to Washington, and we will push the case against Russia. Enough of the russian aggression ! It is time for them to pay a heavier price. Our fight is not with the russian people but with Putin. Our promise to you is to take your cause to Washington, and inform the american people of your bravery, and make the case against Putin to the world. »

John McCain – « I believe you will win. I am convinced you will win. And we will do everything we can to provide you with what you need to win. We have succeeded not because of equipment, but because of your courage. So… I thank you and the world is watching. And the world is watching because we cannot allow Vladimir Putin to succeed here. Because if he succeeds here he will succeed in other countries. »

Does Trump know that his senators are starting wars on his behalf?

—> Donald Trump is playing 4D Chess against the Deep State.

—> Donald Trump is playing 4D Chess against his MAGA supporters.

Trump has about 5% control over his party, because it is not his party. The party is owned and run by liberal-Zionist. Trump has very little control over anything.

What’s wrong with Graham, he looks nervous. Or full of shit. And McCain’s ‘success’ – more not losing. Gotta locve the updated domino theory – the old one worked out didn’t it.

I hope the assholes brought something to eat.

SAVE THOSE SHELLS FOR ISIS! NOT FELLOW ABORTION RIGHTS SUPPORTERS!

Nice award, I see they are embracing their WW2 history of collaborating with the Nazis.

It’s starting. From now on things will keep escalating in stage to test the big prizes reactions. I hope I’m wrong.

Apparently the Kiev fools believe that there is something to be gained by murdering their sons and their neighbors.

stupid fascist idiots, YOU GONNA GET FUCKED BY DPR!!! LOL

The “anchor and the cross” – hilarious! :) This is just a pathetic, last-ditch attempt to goad the Russians into fighting Ukraine – without that, their claims of “aggression” continue to be ludicrous and just a stupid excuse for killing their own citizens (now former citizens). I think it’s a good thing, despite the tragic and unnecessary deaths of civilians, because it will help Russian diplomats argue for their UN peacekeeping plan – protection of civilians requires it. This comes just as the US is trying their own pathetic, last-ditch attempt to salvage some dignity and power from the Ukraine disaster – by trying to get their own ridiculous version of the UN peacekeepers, on the Russian border no less! Talk about delusions of grandeur. I think the Ukrainian people deserve a real election, observed by the EU and Russia, to restore some measure of democracy to this failing state.

Is there really such a thing as the “Ukrainian navy” anyway?

What battles have involved the Ukrainian navy. It has yet to fire a shot in anger – let alone have any weaponry used against it. It couldn’t even be made of the gates of Navy posts taken by the ‘russians’ – they kept them, too – as well as the fleet. More EUkrainian bolshoi and not worth the white metal they’re made from.