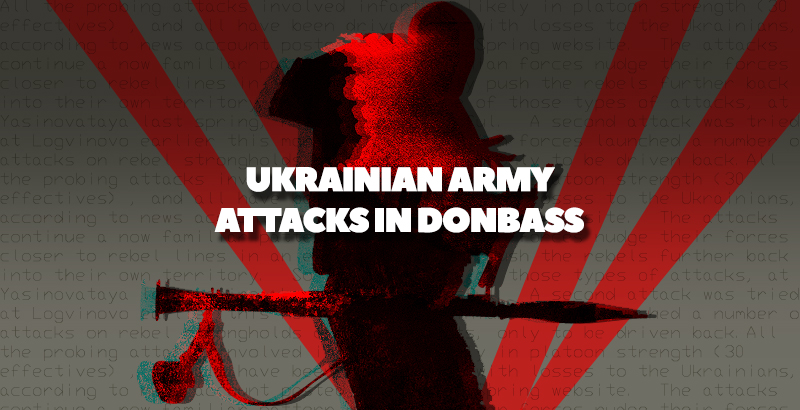 The situation is deplorable in Donbass, where the ceasefire is violated through the fault of Ukrainian forces.

On March 26th, Ukrainian fighters have fired officers of the LPR delegation  at the Joint Center for Control and Coordination of the Ceasefire (JCCC), when they were documenting the aftermath of the Zolotoe-5 bombing.

The Center claimed that the Ukrainian Armed Forces had fired at Zolotoe-5 twice in the past day and that a school and residential buildings had been damaged.

“While observers from the LPR’s representative office at the JCCC were trying to document the consequences of the ceasefire violation in the village of Zolotoe-5 (Mikhailovka), Ukrainian gunmen opened fire at 2:40 p.m. (AGS-17).” – the report says.

It was reported that as a result of the bombing of the village of Zolote-5 in the Luhansk Democratic Republic, three residential buildings, two houses and an outdoor kitchen were destroyed. It was also reported that the windows in the local school were broken due to the explosions.

Meanwhile, fighters from the Ukrainian “Right Sector” are being transported en masse to Gorlovka. This was reported by WarGonzo (Semyon Pegov) with reference to its own sources in Konstantinovka and Dzerzhinsk.

“In these cities, new units of the right-wing organization, banned in Russia, have appeared in the so-called (Joint Forces Operation) zone.” Pravoseki (rightists) do not hide their presence, while openly intimidating the local population of Donbass,” the message reads.

The militants are reported to be occupying “empty” houses belonging to residents who have gone to work or gone to war. And in cases when people were evicted from their homes, the local government prefers not to intervene.

There is also talk of a large accumulation of equipment and personnel of the Armed Forces of Ukraine on the railway lines near Krasnoarmeysk.

On March 19, it also became known that the special forces unit “Azov” of the National Guard of Ukraine is also preparing for transfer to Donbass.

With the “Azov” and “Right Sector” deployment, the leadership of the Ukrainian Armed Forces intends to increase the presence of ideologically trained fighters capable of destabilizing the situation.

In addition, the leader of the Ukrainian neo-Nazi group “National Corps”, Andriy Biletsky, called for decisive action on the issue of the return of the Crimean Peninsula and Donbass regions to Ukraine.

What is certain from the above is that the situation is dire in Donbass, where the ceasefire is being violated through the fault of Ukrainian forces. The deployment of Ukrainian paramilitary forces exacerbates the security situation in the region.

Just like I said, the deployment of neonazi battalions close to Crimea by the Zionazi coup Kiev regime would allow for the Ziocorporate terrorists’ deployment of some new stuff in Ukraine to ensure “stability” for more Zioterrorist business and partnership with Putin.

Well, let the Nazi-gays get together in full light, with little effort we remove a great number from the list.

These ukrinians are so happy to be dogs on leash of their new US master that they cannot see they are committed to death :)) how can they be so stupid? They get poorer and poorer, full of debts more and more, no to become a powerful economy, but to combat an already lost war :))))

To be fair, Fran: Study our history. The world oligarchs behind the “new US master,” the “international clique” won the previous world wars. Putin being the “new Hitler” is not empty rhetoric; Crimea and Donbass were to Russia what Danzig was to Germany.

Yes, the Internet and alt media have radically changed the geopolitics and viable strategies, but if you were one of the Ukrainians disadvantaged or dead for opposing the oligarchs, won’t that also appear a little stupid…?

Be fair you too. Your Ukraine comes from a coup, and a US puppet was appointed for that. Where is the problem? The US is the most criminal state in the mankind history: 55 milion killed in the last 70 years, according to Chomsky’s “Western Terrorism”. A country born on the genocide of natives and still killing the blacks coming form the slaves which were deported from Africa. You are a colony of such a terrorist state. There are no Putin and oligarchs which can be compared with these figures. Figures are figures.

I know the Maidan Revolution was a coup, but do you believe there is nothing “stupid” about opposing the groups which violently took over someone’s country? Are you, Fran, currently on the front lines against whatever corruption your country has…?

And why is the “colony of such a terrorist state” argument significant? Even the US is a colony of the “European” oligarchs it once fought for independence from. Five years after declaring independence, US President John Adams said, “Great Britain has been moving earth and hell to obtain allies against us… Great Britain has borrowed all the superfluous wealth of Europe, in Italy, Germany, Holland, Switzerland, and some in France, to murder us.” If you still believe this has nothing to do with “oligarchs,” please check out Rivero’s “All Wars Are Bankers’ Wars.” https://www.youtube.com/watch?v=5hfEBupAeo4

Sorry, your rethoric is very week, even meaningless sometime. 2 examples:

1. Morocco was an Italian colony at the time of the Roman Empire. But this is a totally irrelevant detail in order to describe these 2 countries nowadays. On the contrary it is relevant that Ukraine is a US colony today, because your primary goal is today to serve your master which don’t give you money to get rich and evoluted, you’ll never be Germany, your cities will never be beautiful like Firenze Rome Venezia Paris Sant Petersburg. Your master give you many to fight and die for its interests :))

2. You are obsessed by these Russian oligarchs:)) just forget them. You are now under others oligarchs which will teach you what neo-Nazism is. You are under Rotschild Rockfeller Gates :))) you got money from US and you think it was a gift or some help :))) you’ll pay forever interest rates and submission to those US bankers :))) while you’ll pay your submission as a colony with your blood in the already lost war against Russia.

1.) Based on the UK’s nuclear weapons, troops around the planet, and “alliance” with its “former” colony, the US, Great Britain’s colonialism is still relevant today, yes? And while Ukraine is under bankster control, the country may not end up like today’s Germany, but it is less likely to end up like post-world war Germany or any of the other countries in the banksters’ “axis of evil.”

Please note, Fran: I am not advocating surrendering to the banksters. I am explaining why challenging them is difficult.

2.) Sorry, I never said “Russian oligarchs.” I said “‘European’ oligarchs,” “world oligarchs,” and “international clique” oligarchs. Russian oligarchs, capitalist or communist, are just a spin-off. The world or international element of the banksters is why, for example, billionaire Igor Kolomoisky could support Maidan, help fund the Azov Battalion, run to “Israel” (another “former” British colony), and continue to have influence in Ukraine like through Zelensky and the 1+1 media network.

What the hell is zolotoe? I hope russia takes kiev soon

Isn’t there any passenger aircraft for the Kiev junta to attack? It’s not like the old days. An outdoor kitchen just doesn’t cut it.