On September 12th, another round of disarming the “volunteer battalions” [mostly consisting of various Nazis and radicals] by Ukrainian authorities began.

Three formations surrendered their weapons at once – the battalion named after Sheikh Mansur, the OUN and the 8th battalion of the Ukrainian Volunteer Army. The police disarmed them under the leadership of Deputy Vyacheslav Abroskin, who was soon about to quit.

The disarmament is presented as purely voluntary by the battalions, but in truth, these battalions aren’t organized by the government. They are essentially a sort of militant group, that’s not even a paramilitary contractor, since they’re more or less illegal.

Thus, it is likely that the “volunteer battalions” were offered something in return, since a possible conclusion of the settlement process in Donbass and successful “Normandy Four” talks would mean they are out of a job, but heavily armed.

The official statement by law enforcement officers said that the volunteers themselves decided to part with the arsenal of weapons.

“The fighters of the battalions named after Sheikh Mansour, the OUN and the 8th battalion of the Ukrainian Volunteer Army decided to voluntarily transfer the remaining weapons to the police,” the message said.

It was noted that “the volunteers who defended the independence of Ukraine for five years were thanked by the first deputy chairman of the National Police, Vyacheslav Abroskin, during a working visit to the Donetsk region.”

The wording of this phrase is sustained in the past tense – “defended.” It follows from it that today volunteers are no longer fighting in the Donbass.

The police didn’t take all of the weapons. Larger weapons such as mortars and the shells for them, as well as various grenades were left there, and not taken.

Strana.ua cited an SBU officer, who said that approximately half of the weapons were given, with the others remaining. The reasoning was that the police wouldn’t be allowed to leave the Donbass with the heavier weapons.

Reports of various “volunteer battalion” members being killed fighting on the side of ISIS or other terrorist groups in Syria are also on-going. So it is not completely out of the question some of the weapons to have been “exported” to that front.

The demonstrational event in which the “volunteer battalions” gave away their weapons was, in fact, the militants giving away pistols, assault rifles and other smaller arms, but all the while keeping their mortars and grenades.

All three formations that began to surrender weapons were formed with help the well-known Ukrainian neo-Nazi organization ‘Right Sector’.

The Sheikh Mansur battalion is a Chechen formation that appeared in October 2014. Its creation was announced in Denmark, where many former militants of the so-called “Republic of Ichkeria” lived. The Chechen Muslim Cheberloevsky led this formation. Despite the big name, the battalion named after Sheikh Mansour has not fought on its own since 2015, acting as part of the Right Sector divisions and consisted of about ten fighters.

The next disarmed battalion is the OUN. This formation is under the command of Nikolai Kokhanivsky and several other nazis. It was created on the basis of the Nizhyn territorial defense battalion. It joined the fight in August 2014 as part of the Right Sector. It was located in the area of Sand, where other formations of Yarosh are located.

The third unit is the 8th battalion of the Ukrainian Volunteer Army, aka Aratta. They are commanded by Yarosh’s comrade-in-arms Andrei Gergert (Cherven). The compound was based in the village of Yuryevka near Mariupol and was originally part of the UDA.

All of these volunteer battalions are actually illegal armed groups, which the Ukrainian government needs to put up with.

Mostly because, they are capable of an armed revolt that could create massive destabilization in Ukraine. But also, because they’ve carried various “unofficial” tasks on orders of the United Operation Headquarters of the Armed Forces of Ukraine (the former ATO headquarters).

The leader of the UDA – Dmitry Yarosh – in October 2018 announced the withdrawal of all his units from the Donbass and the creation of territorial defense units throughout Ukraine.

But, as we see from the national police, the conclusion was somewhat delayed. The “volunteers” are still in the Donbass and they are heavily armed.

They remained in the Donbass, carrying out sabotage and small-scale assaults, despite the supposed notion that they’ve withdrawn from the frontline.

It is becoming and more apparent that the Ukrainian government can’t deal with these “volunteer battalions” which do not fall directly under its control. This “disarming” charade is simply a way to show that “we’re taking their weapons away, they can’t do anything now,” all the while half of the groups’ weapons are left and they’re the heavier ones. To do as they please with. well, zionists, jihadists, neo-nazists and neo-liberals, all on the same team. Who wudda thought!

AM Hants
Reply to  David Wadström

Which is no doubt why the Hong Kong protest leader, keeps company with kindred spirits. All funded by the same crowd. 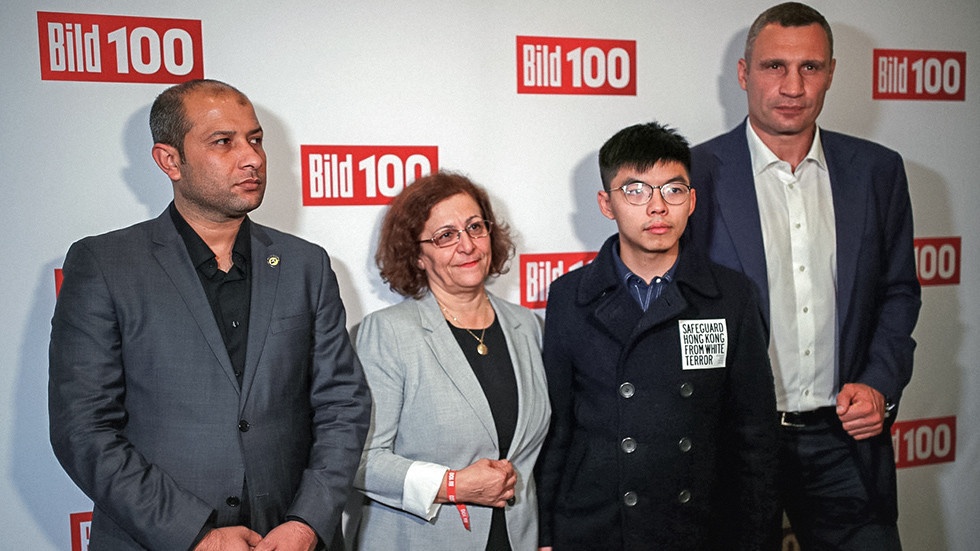 They are all the same and it a tested terrorist mix since the cold war.

Who cares….. their President is a Jewish comedian

They literally have John Stewart as their leader haha

confused, as I thought the Comedian turned President’s mentor, Igor Kolomoisky, the Head of the European Jewish Community, over in Ukraine, funded the first of the Nazi battalions?

The good news, is Russia and the Syrian Forces appear to be giving them a good kicking over in Syria. Hope many more of them find themselves lying amongst the sand, over in the Syrian desert, rather than make their way back to Ukraine and cause more grief.

Meanwhile, over in Donetsk, look who popped over to pay a visit. Wish her well and thank her for all her work in bringing the bigger story to us all.

It’s hard when what you got are absolute corrupt, greed and EVIL people in power, I see no true ukraine-nationalist have quality leadership to balance the share of power.

Ukraine is now a dumping ground for global Nazis and Zionist trash. Russia needs to clean house before the failed state of Ukraine becomes another eastern European Syria. NATO and Israel are actively turning Ukraine into a terrorist and extremist breeding ground.

A lot of talking, no action.
Long overdue to terminate all this Judo-Bandera scum

Funny, how the comedian turned President’s mentor, the Head of the European Jewish Community, set up the Nazi battalion, in the first place, with his good mate, and of course another one of Ukraine’s many needy oligarchs.

Oleg Tsarev: By His Actions in Parliament, Poroshenko Is Trying to Show His Teeth

“I confirm the information that Poroshenko brings together radicals who didn’t fall under Avakov and Kolomoisky’s control. Avakov gave an oath to Kolomoisky in the past and asked to help him finance the ‘Azov’ battalion and other radicals. Therefore Poroshenko indeed finances radicals. I heard that they pay the chief a fixed salary (about $2,000 per month). At stake are the billions of dollars Poroshenko ‘earned’ during his presidency. In order to protect this money, he maintains a faction and an army of radicals…’

Who are the ones that suffer in Ukraine, courtesy of events from 2014? Yet, the UN appear to fully support the war crimes, of Ukraine.

So what has Zelinsky done, to sweetcharm Trump, now that Bolton has gone?

Wonder how many faces Trump has, on any given day?

The real Nazi terrorists are the ones putin sent to invade Ukraine and steal crimea and do putins killings around the world , low life scum .

USA ,Irael and NATO administrations are infested with evil warmongers. Let Trump fire them one by one.